For trainers accepted to the hybrid 2020/2021 Retired Racehorse Project’s Thoroughbred Makeover and National Symposium, presented by Thoroughbred Charities of America, the work continues after a weird last year. The 2021 event will take place at Oct. 12-17 at the Kentucky Horse Park. Between now and then, this team of four trainers will be blogging their journeys, including their triumphs and their heartbreaks, successes and failures, for Eventing Nation readers. 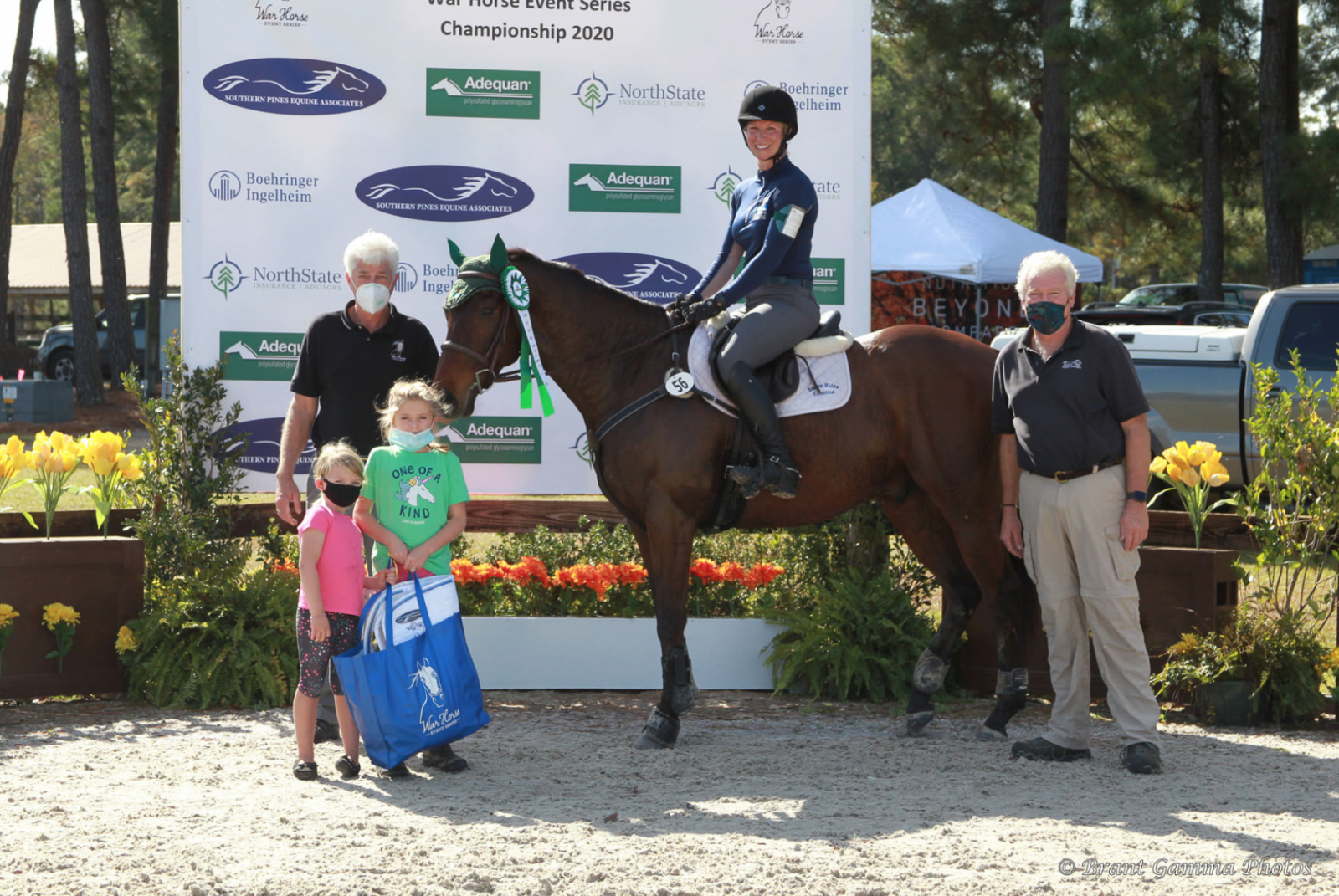 Quite a few changes have transpired since our last blog post in June. Of our four main 2020 Thoroughbred Makeover hopefuls, only one of them still remains with Dappir Ridge. Sevennotrump (“Tricks”) and Hunters Dream (“Fox”) found wonderful new homes, while Prince Attack (“Prince”) returned to Illinois to be enjoyed by his owner, Laurie. Only the infamous Robbie Jones remains with us- Kelly will fill you in on his recent adventures below.

Over the fall and winter, we have had a handful of OTTBs pass through the barn, which we have brought along as resale projects. A few have since been sold, and a few of them were just too nice to let go! Those in the latter category will stay with us this season to hopefully contest the 2021 “Mega Makeover”.

Of our collection of “keepers”, there is one common thread, which is fairly unusual: ALL of them came from Illinois! Go figure! Since Kiki, our fearless leader, hails from the great state of Illinois, it is only befitting that all of our horses would be from there as well.

Last fall, my 2020 Makeover horse, Sevennotrump (“Tricks”), found his stride in the jumper ring. I took him to a couple of jumper shows at the Virginia Horse Center, where he earned himself champion in the 2’6 division, then easily moved up to the 2’9. In November, Tricks was sold to a 5* event rider, and is now in Aiken for the winter, living his best life! We can’t wait to see how Tricks (now called “Ted”), progresses with his new rider.

There’s a new face in the barn, and a cute one at that, whom I hope will be my 2021 Thoroughbred Makeover project. Her name is Wicked Soprano, aka “Raven”, a 2017 model 16hh black/dark bay filly, purchased sight unseen from CANTER Illinois. Raven had 7 starts on the track, without much success. She was described by her race trainer as a “Morning Glory”- a horse that performs well in their workouts, but doesn’t run well in the actual races. Lucky for me!

This fancy lady stole my heart from day one. She is gorgeous, feminine, and full of pizzaz. Alex says that her human doppelgänger is Posh Spice, if that gives you any idea of her diva personality and stunning looks. Under saddle, Raven has springy, expressive gaits with incredible natural balance, and seems to be a quick learner. She is sensitive to the leg and soft in the bridle- a real sportscar type.

Hacking out is a huge part of our program with the OTTB babies at Dappir Ridge, but some of them take to it more readily than others. Raven really seems to love it, so far! She has hacked alone and with company, through fields, wooded paths, and down our dirt road in a brave, quiet manner. Most recently, Raven has begun trotting over poles, cavaletti and small cross rails, and has taken to it all with confidence and nonchalance. Furthermore, she is sweet and polite to handle in the barn, and has a very persuasive cookie face!

I think my main challenge with Raven will be teaching her to slow everything down. She is a forward-thinking type- I probably say “whoa” about 1,000 times during each ride! She is respectful and wants to learn, but sometimes she still thinks she’s a racehorse. After all, her last race was in mid-December, not that long ago!

I am super excited to bring along this spunky, athletic mare and look forward to our journey to the Thoroughbred Makeover together this season. 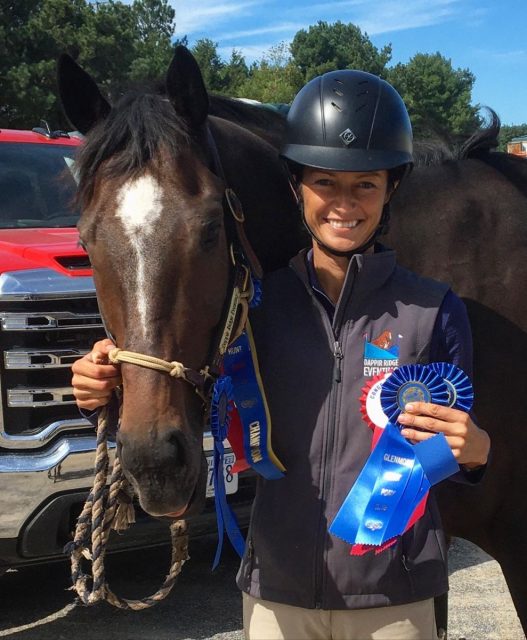 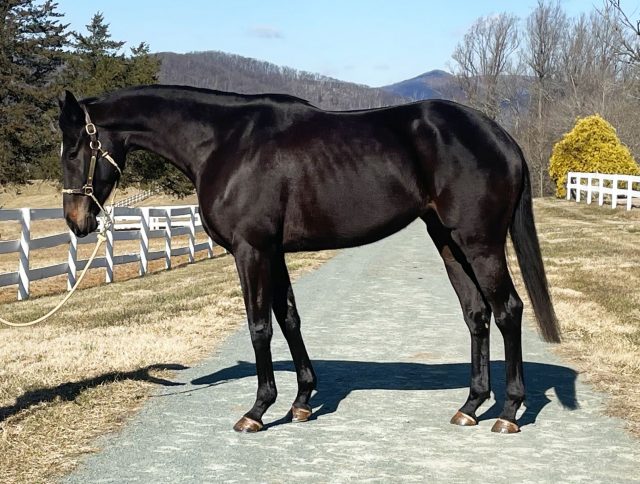 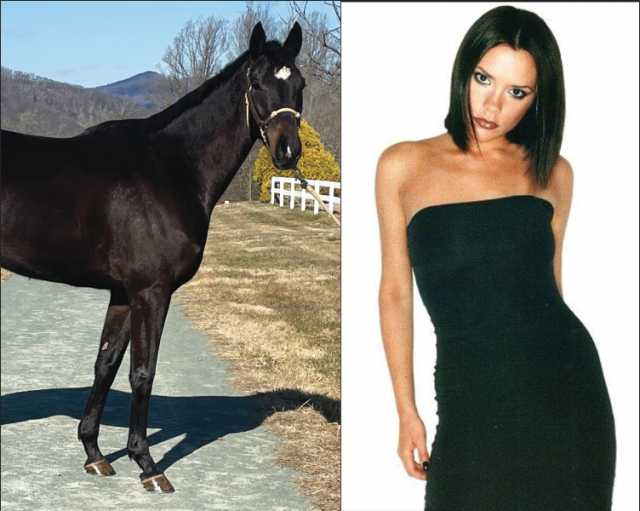 Raven and her human doppelgänger. See the resemblance?! Photo courtesy of Adriana Nannini 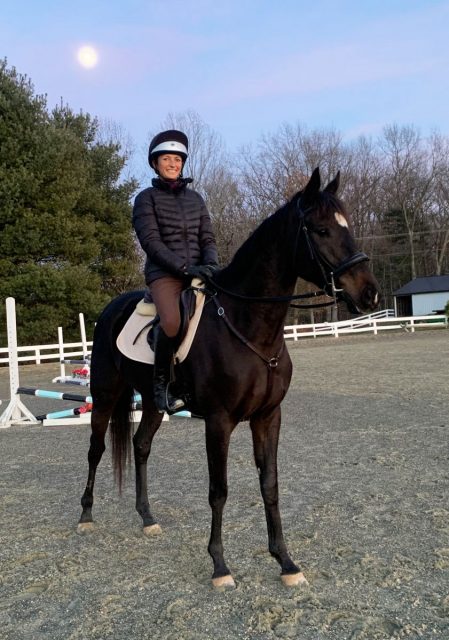 Robbie Jones had a fantastic fall. His feet were finally doing great and we were able to attend most of the shows at the Carolina Horse Park War Horse Event Series. We ended up coming in 6th place in the series championships for Beginner Novice! We also practiced schooling the Novice course a few times and it was no problem at all for Robbie.

In October, we went to a hunter show at the Virginia Horse Center and won a ribbon in a big class against fancy warmbloods! Robbie even went fox hunting a few times with Farmington Hunt Club!

This winter we have been working on perfecting our dressage training with the help of Kiki. We were just figuring out counter canter (sort of) when we were sidelined by a foot abscess- the 2 week long drain out the heel bulb kind! So now, Robbie is nursing his foot back to health and mom is going skiing. We should be back in action soon. 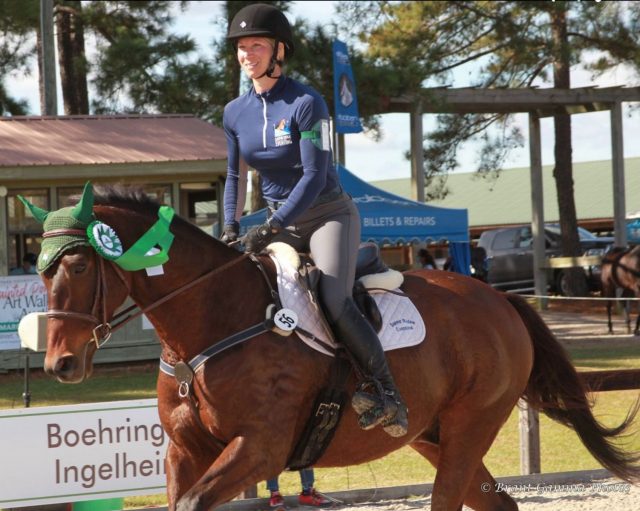 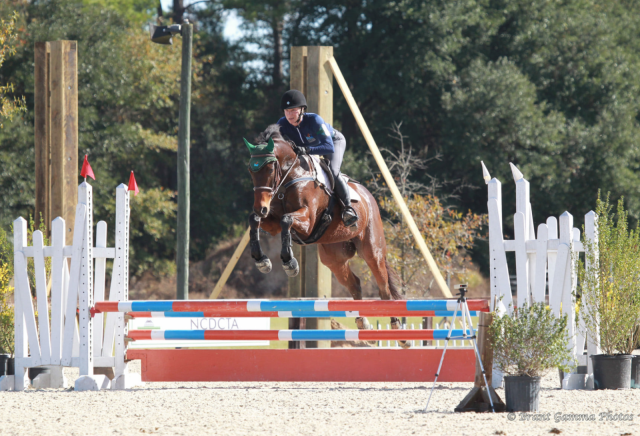 Last summer, Hunters Dream (“Fox”), came into his own and really grew up, with each ride becoming a little more focused and a little more productive, and handling new environments gracefully. He was listed for sale in August and went to a lovely home with the first people who came to look at him! We keep our eyes out for him on the local show scene, as he didn’t go too far away! I feel very honored and grateful to have been a part of Fox’s training.

This year, my Makeover hopeful is nearly the exact opposite of little Fox. Crafty Oak’s Run, “Rōnin”, is a 2016 17hh (!) liver chestnut, who came to us from Robbie Jones’s trainer in Illinois. Rōnin had very little (read: zero) success as a racehorse with only three starts. Also, just like Robbie Jones, Rōnin has a lovely sensible brain and affectionate and engaged personality. Not to mention three gaits that are balanced and have a surprising amount of suspension. My face was plastered with a huge smile during the entirety of my first ride on him.

Rōnin reminds me a bit of a Great Dane puppy at the moment, head and feet a little too big for the body and a similar disposition. He is ready and willing to please and has been a joy to work with so far, hacking out alone or with others, and learning to handle his large body in the smaller space of our arena than previously used to on the track. The right lead is frequently elusive for him at this stage, and bending left is most difficult…my left side will be very strong one day.

I am very excited to see what this big guy wants to do in his second career! 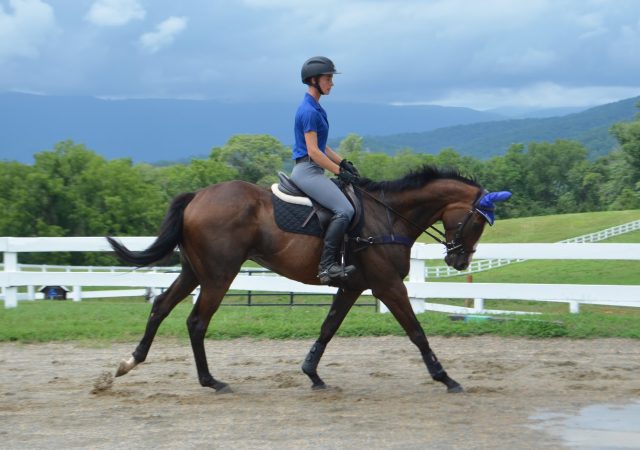 Alex Austin and Hunters Dream in Summer of 2020. Photo courtesy of Adriana Nannini 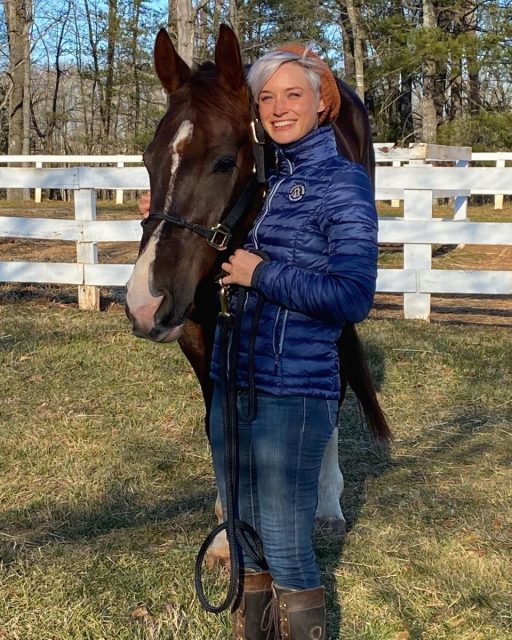 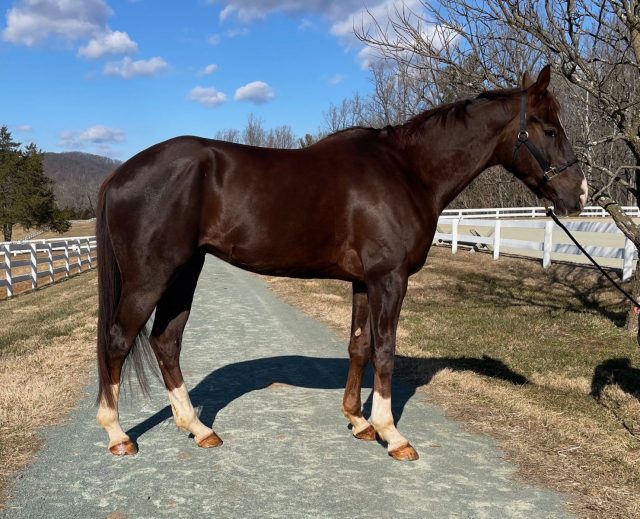 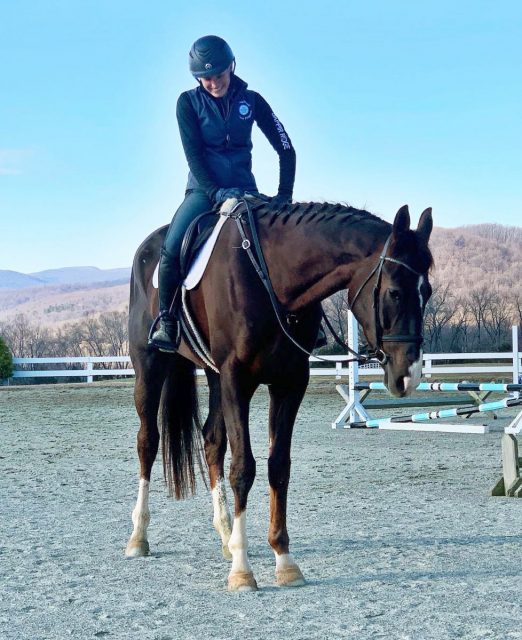 It’s been a short while since we all checked in! Thanks to our ongoing pandemic, not surprisingly, the 2020 Thoroughbred Makeover was canceled. Because of this, my 2020 Makeover hopeful, Prince Attack, didn’t have to stay with us until November anymore. Onto “Plan B”. Laurie, Prince’s owner, was anxiously awaiting his return to Illinois so she could get to know her “little carrot”, as she fondly calls him. Shortly after one of the War Horse events, Prince loaded on a fancy horse van with one other horse, an American Pharoah filly- I told him he really had to behave in that company! Laurie met the van in Kentucky and shipped him back to his old/new home state of Illinois. Prince originally came from the CANTER Illinois crew, so I think he’s a Midwest boy at heart!

Laurie took Prince to meet “Cowboy Tim” so that he could continue his education. Laurie was just getting back into riding after a long hiatus, so Prince needed to keep improving his skills to be a suitable mount for her. It was really nice that Laurie understood this, and didn’t try and take on the 4 (now 5) year old solo.

Prince has been thriving in his new home. I get pictures and videos frequently. He even has an Instagram account (@princeattack_ottb)! Prince has learned about western tack and being a versatile citizen. He actually looks pretty fancy in that western saddle! At this point, since it seems like so much is still not a sure thing, we are unsure if Prince will make it back to Virginia in the spring to continue moving toward the 2021 Makeover, or if he will remain with his mom in Illinois instead. Either way is fine with me, I’m just happy Laurie is enjoying the journey with her horse! If Prince doesn’t make it back East, I may have one more option…

In November, I saw another horse on the CANTER Illinois site named Shake and Spin. He was a 2018 model, jet black, leggy gelding and a grandson of Vindication (sire of my beloved OTTB “Galvani”).  I hesitated to call because he was only 2, but kept going back to his picture/video, and a few days later decided to call the trainer. Not surprisingly, she told me that he had been sold- to someone in Virginia. I had a hunch who had bought him. Sure enough, about 3 days after my call, a picture and post about him showed up on Liz Millikin’s Facebook page. Of course I had to comment on the post that she beat me to him, and that he looked lovely. Thanks to Liz, after a phone call and a text or two, I was driving up to Middleburg to pick him up. Hmmmm. There’s now a stunning 3 year old in my barn, now named “Frijole”, or “Ole” for short.

“Ole” had 4 recorded workouts but zero starts, so he is much different than most racehorses. He is a soft, rangy mover and is exceedingly quiet. We have only been on him 5-6 times since the first of the year. He is technically not even quite 3 yet, and clearly has some growing to do, so we plan to mostly just hack him for the next few months, then slowly start some work. If he’s moving along ok, and seems mentally ready for a big atmosphere like the Thoroughbred Makeover, he could maybe go and do some dressage tests, or something low-key. He won’t be forced to go out and do a ton this year if he’s not ready. As usual with horses, time will tell! 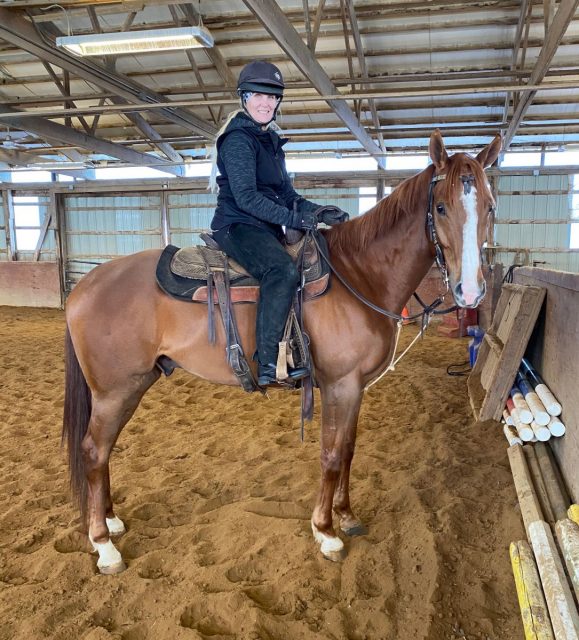 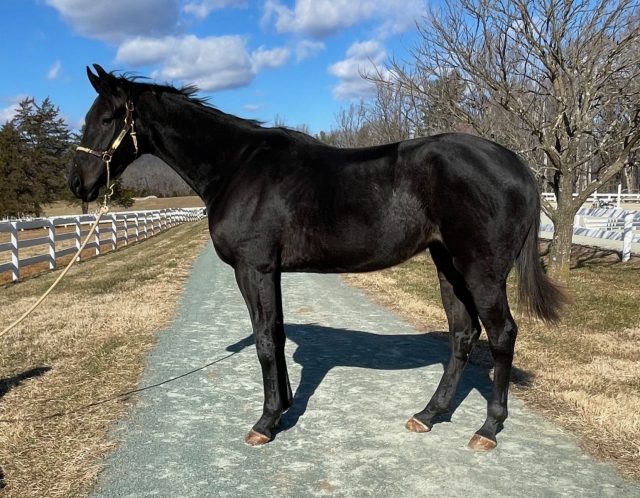 Shake and Spin, aka “Ole”. Photo courtesy of Adriana Nannini 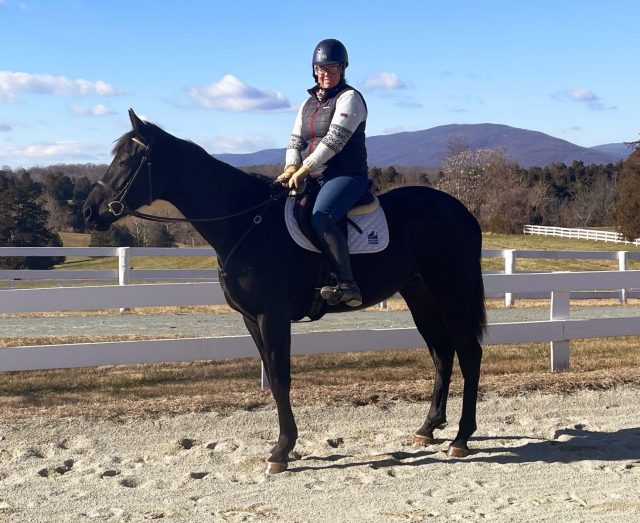 We hope you enjoy following our continued journey to the RRP Thoroughbred Makeover. Go Eventing and Go Thoroughbreds!