For 616 accepted trainers, the journey to the Retired Racehorse Project’s 2020 Thoroughbred Makeover and National Symposium, presented by Thoroughbred Charities of America, has begun! The 2020 event will take place at Oct. 7-10 at the Kentucky Horse Park. Between now and then, three trainers plus one team of four trainers will be blogging their journeys, including their triumphs and their heartbreaks, successes and failures, for Eventing Nation readers.

Earlier this year we met a team of four trainers from Dappir Ridge Eventing in Charlottesville, Virginia, and it sounds like they’ve had some hills and valleys since their last check in late March. Any journey is more fun when you’ve got buddies by your side! Here’s an update Adriana Nannini’s update — be sure to check out her website here. 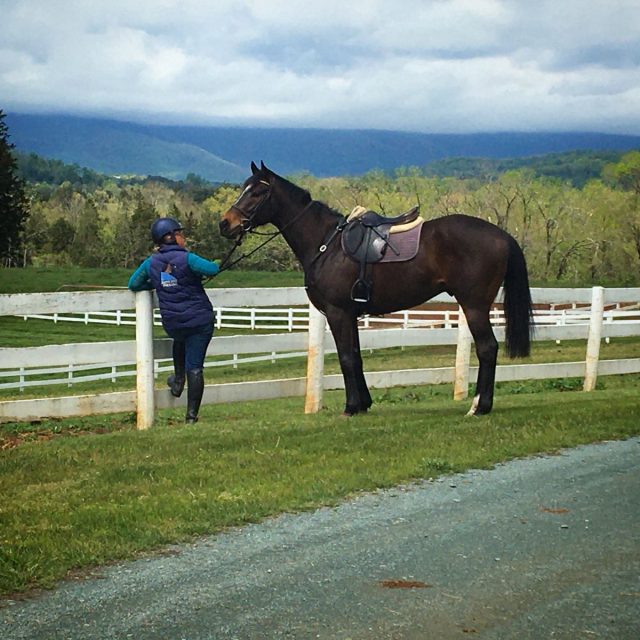 Ah, the trials and tribulations of training a baby Thoroughbred! Over the past few months, all six of our RRP horses have experienced small setbacks of some sort or another, whether it be soundness related, training related, or a combination thereof. In addition, while we normally would have been taking the babies to horse shows, schoolings, clinics, etc. during this time, coronavirus has definitely put a damper on our #fieldtripfriday plans.

Nevertheless, forge ahead we must! Our team has managed to do the best we can given the circumstances, and I am pleased to report that all of the Dappir Ridge baby OTTBs are coming along quite nicely. Now that horse shows and events are starting to open back up, we are excited to get out and about so that we can expose our mounts to new places, sights and sounds, which will help prepare them for “the Big Event” in October!

“Bag o’ Tricks Lives up to his Name”

Sevennotrump, aka “Tricks,” celebrated turning 4 by undergoing a tremendous growth spurt. He came looking rather shrimpy and upside-down, but now has really blossomed into quite a large, fit, athletic creature, partially due to several months worth of hacking up and down the rolling hills of Virginia. Tricks is now very confident and thinks he’s hot stuff. He sometimes gets ideas in his little 4-year-old brain, and we don’t like Tricks to have too many ideas! So, needless to say, I’ve been spending the past few months learning how to creatively manage Tricks’ exuberance in a way that is productive.

Tricks’ show name that I chose for him is “Bag o’ Tricks” and it couldn’t fit his personality more perfectly. He’s like a playful, mischievous little boy, and is always trying new tactics to test his boundaries. I spent a considerable amount of time convincing him to move forward off my leg, because he would sometimes decide that his feet were cemented to the ground and he simply could not move. Once we overcame that, we spent another several weeks figuring out how to track straight instead of bulging our inside shoulder and running sideways. Now, to my relief, it seems as though we have that figured out.

Tricks has demonstrated real athleticism over fences, and recently went cross-country schooling for the very first time. He bravely jumped over logs, through water, up and down a bank, and even over a ditch! Tricks trailers like a perfect gentleman, and really seems to be settling into his new life as an event horse. He and Hunter’s Dream aka “Fox” are field trip buddies and lesson buddies and hacking buddies, and they’re really a cute pair of dark bay buddies! A few of the babies, Tricks included, are entered in their first schooling horse trial in July. I can’t wait to see where our summer adventures take us! 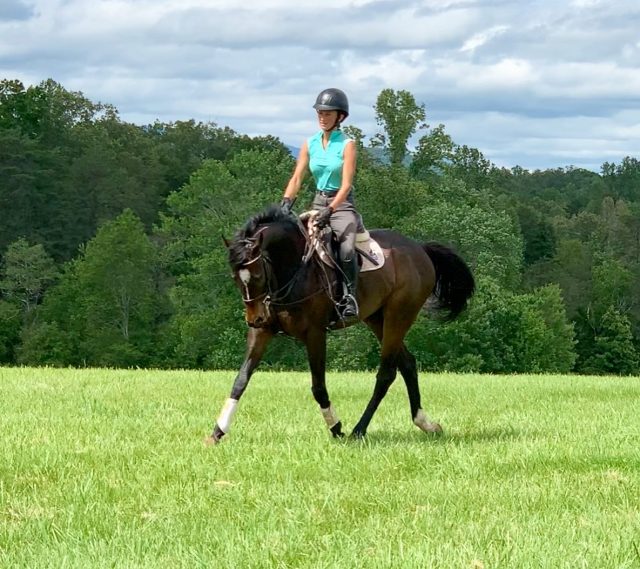 Sevennotrump aka “Tricks” is maturing into a big, athletic beast! Photo courtesy of Kiki Osbourne 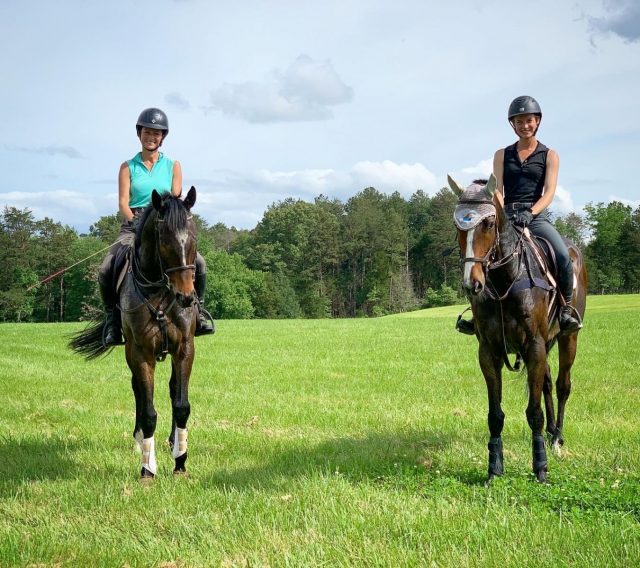 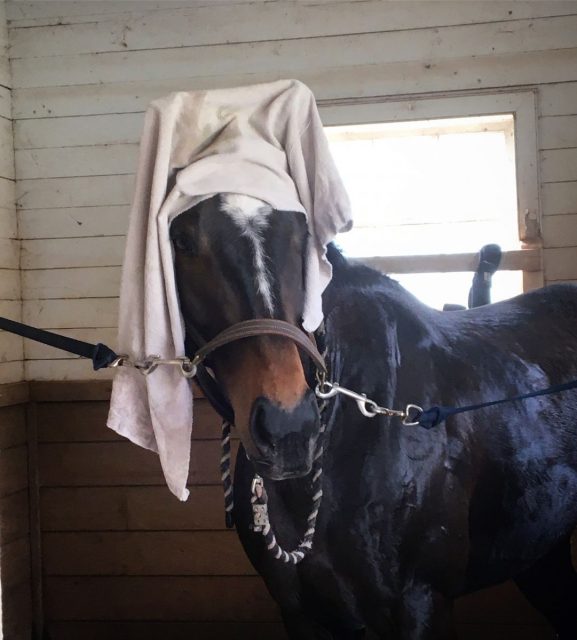 After spending many years at a racetrack it is very exciting for a young horse to experience the joys of turnout in a large field and playful new pasture mates. Robbie Jones aka “Robbie” had so much fun with it that he started pulling shoes off. With each lost shoe his hoof wall began to crumble and there was less foot to nail the shoe back on. Eventually this caught up with Robbie, his soles got very thin and bruised and the nails started causing discomfort. Robbie had to spend some time in jail (also known as stall rest). Balance films of his feet were taken with the farrier and I almost went crazy trying to figure out ways to keep those shoes on long enough for his feet to grow back out. We had about a two month setback in training but now we are finally back in action! 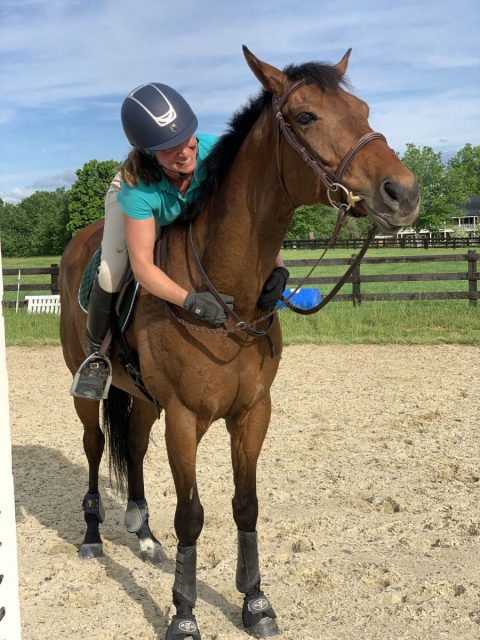 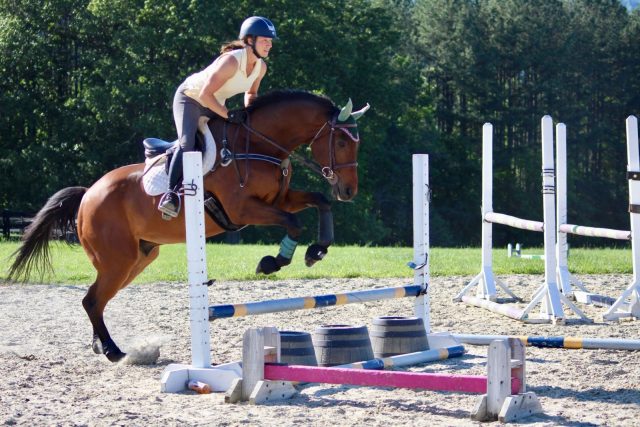 Robbie and Kelly are glad to be back in action! Photo courtesy of Ashley Holden 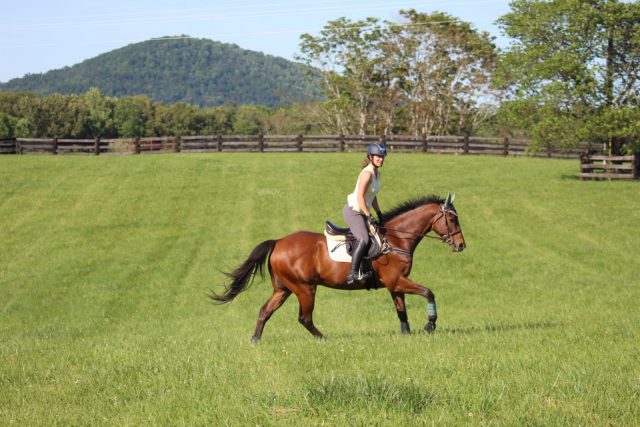 Sweet little Fox (Hunter’s Dream) had a couple weeks off due to him doing some accidental cosmetic surgery. He opened up his forehead on something sharp and had to have many staples and a drainage tube put in. Our amazing vet Kelly patched him up so beautifully there is only the tiniest of scars, nearly indistinguishable.

Other than his “mini vacation,” Fox has been jumping a bit more and learning to bend. The bending he finds very hard, the jumping not quite as much. He recently encountered a BN ditch while out cross-country schooling and while he thought it was terrifying, ended up summoning his courage to make it over a few times.

He is still a rockstar to hack out, alone or in company, and makes trailering anywhere quite a pleasant experience as he climbs right on and seems to enjoy the ride! 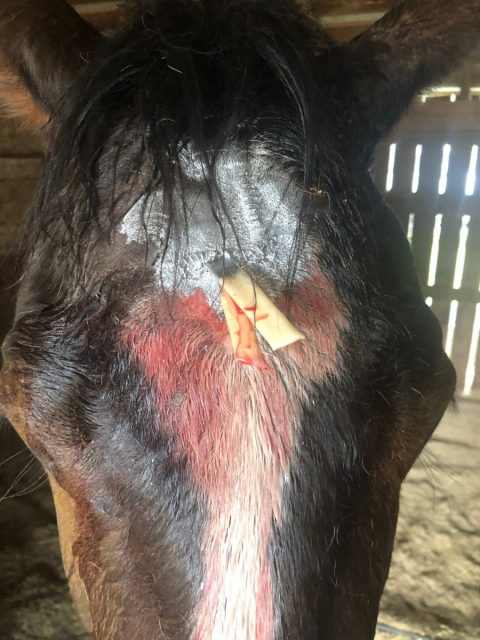 “Frankenfox” after being patched up by Kelly. Photo courtesy of Alex Austin 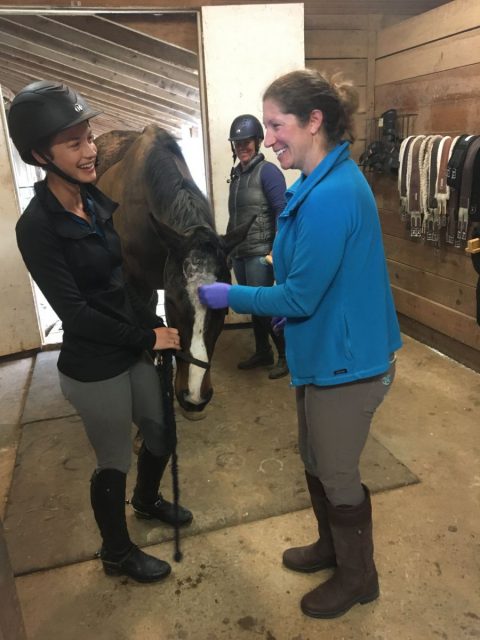 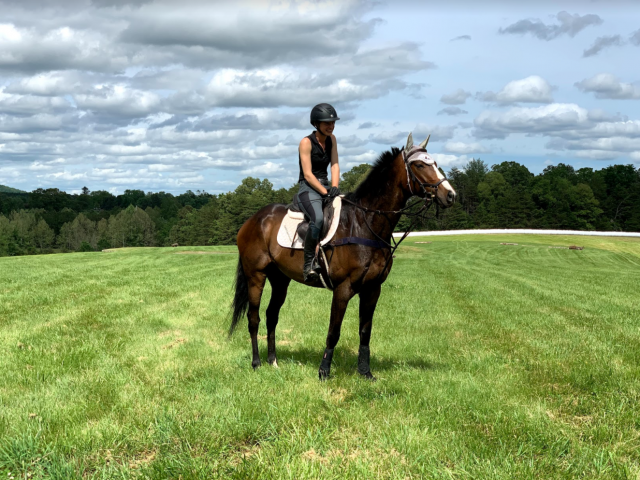 Frankenfox healed up as good as new and is as handsome as ever! Photo courtesy of Kiki Osbourne

This has been a big month for Prince Attack who had a 4th birthday, finally! I’m pretty sure that now that he’s 4, he’s put his big boy pants on and going wow all of us. He really is about the sweetest horse in the barn (well, maybe a close second to Robbie Jones) and loves attention about as much as he loves going out in his big field with all of the oldies all day long. He hasn’t caught a ride to many new places yet, but that’s definitely in his immediate future.

My friend and former student, Ally Farley, came over for a much needed session of groundwork. Prince may have thought all of it was stupid, but it has made him a better horse! A big thank you to Alex and Emily for also putting in some valuable Prince time, while I’m busy teaching-this also makes him a better horse. While he really hasn’t had any major setbacks (maybe I shouldn’t have said that out loud) we have been taking it pretty slow with him, so he ends up enjoying his working life! It’s very possible that there’s a trip to a North Carolina schooling show in his future. 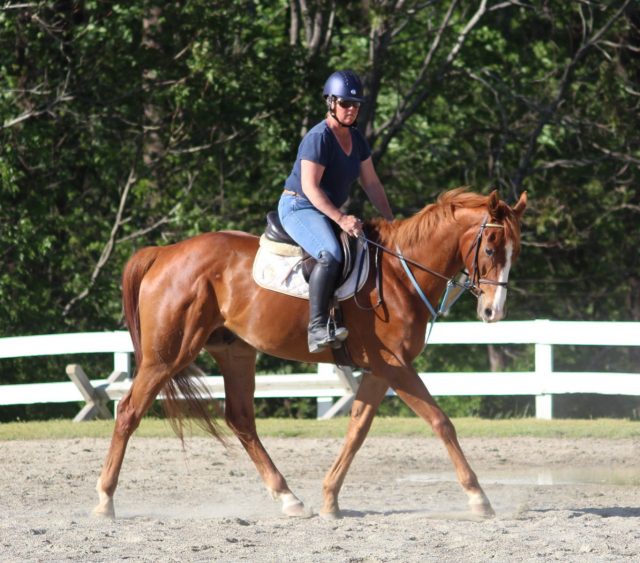 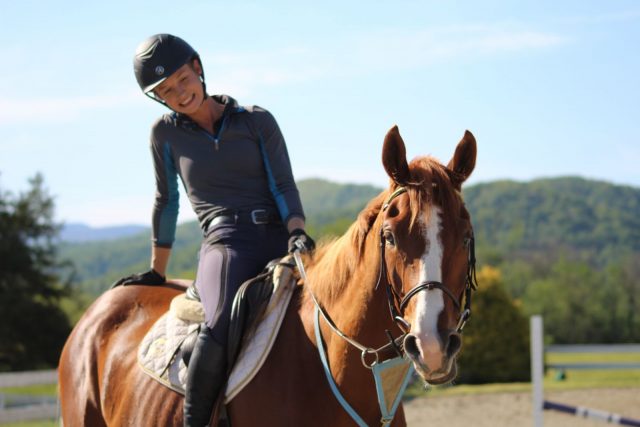 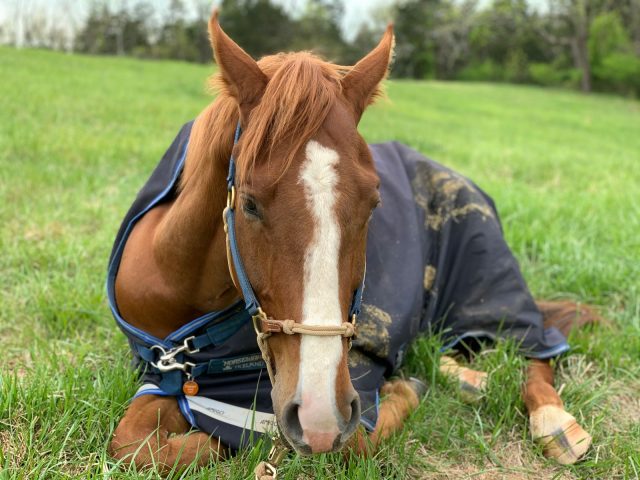 Call Triple A aka “Buddy” continues to be one of the best brained horses on the planet, but he managed to steal a few weeks off after stepping on the clip of his shoe. But, as of last week we are back on track! He’s settled in well to his new digs at Dappir Ridge’s other facility, Chapel Springs! 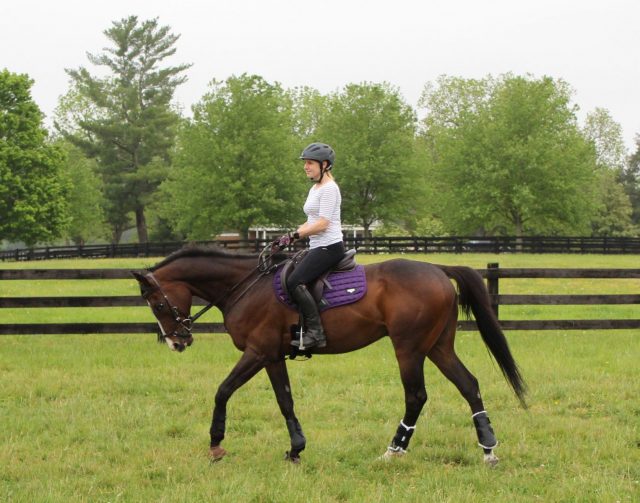 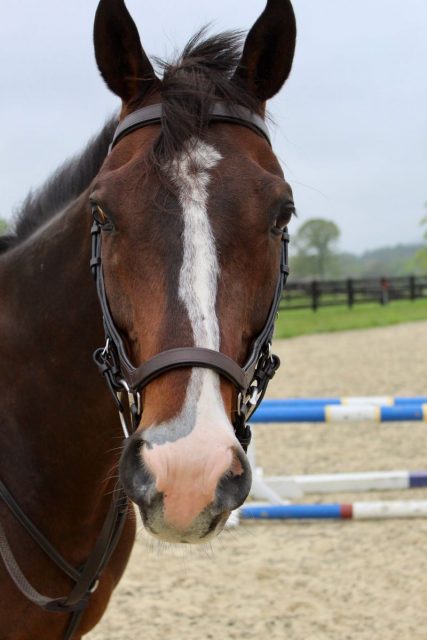 Call Triple A aka “Buddy”. Photo courtesy of Ashley Holden.

Baltic Art aka “Thor” also has managed a short bit of time off from a kick (…..and a foot thing….) so he has returned to his regular home for 30-60 days. I’m looking forward to him being back in the barn soon! 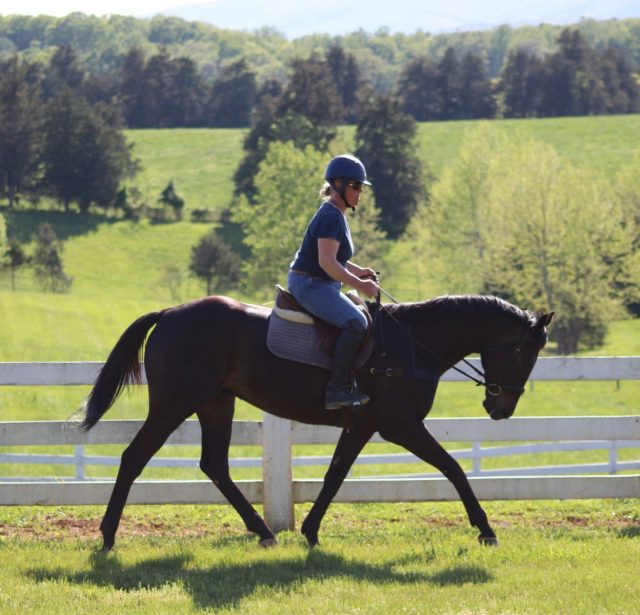 Until next time — Go Eventing and Go Thoroughbreds!