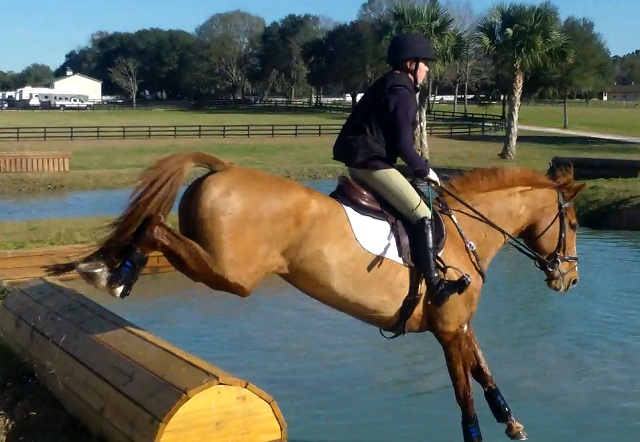 Emily Renfroe and Walk The Line at the training sessions. Photo via video screenshot.

I was fortunate enough to attend a little bit of the Eventing 25 training sessions in Ocala, Fla., this week. Formerly known as the Developing Rider list, the Eventing 25 group is selected from successful riders at the CCI2*/Advanced level who are between the ages of 19 and 25.

On Tuesday, horses and riders were coached by David O’Connor through some simple jumping and gymnastic work. They began over a few canter rails, focusing on rhythm, straightness and control. Then they moved on to a gymnastic line, built up to a bounce, one stride, to two stride finishing over a good-sized oxer. As is common for this time of year, several of the horses were quite strong and exuberant, landing with a head of steam. David encouraged the riders to work on rideability after the fence, with circles and flatwork on landing.

After the gymnastic, riders moved on to single fences set in a sort of circular pattern in the middle of the ring. The jumps were set at related distances, mostly jumped off a diagonal line cutting through the arena. However, each jump was done individually, not in lines; instead of jumping in and continuing on a straight to the “out,” riders circled on landing and continued to circle until the horse settled.

The horse was not allowed to go on until he was back in a rideable frame of mind; David would then call out the next jump randomly (“Blue oxer!”), and the rider would peel off the circle to jump out. It kept the horses waiting and listening, rather than see the jump, run at the jump! Riders were often told to think haunches-in on their turns to create a pirouette-like balance coming out of the turn. Haunches-in is not often done at the canter, since most green horses want to travel crookedly with their haunches in naturally; but in this instance with experienced horses, it can promote increased control and straightness.

David also encouraged riders to land and pat their horse; a few of the horses and riders were caught up in a cycle of land and fight, grabbing each other, causing the horse to brace, anticipating an argument. By petting the neck on landing, it threw the horse off — promoting relaxation instead of tension, and spectators could see the horse soften almost instantly. (This is not a new trick — I’ve used it before, and it works!)

Thursday was cross-country schooling at Meredyth South. I attended the afternoon session to watch a group of four horses and riders: Emily Renfroe and Walk the Line, Allie Blyskal-Sacksen and Sparrow’s Nio, Dani Ditching and The Graduate, and Katy Groesbeck and Oz The Tin Man.

David started by having riders demonstrate their galloping position and “preparation” position, as if approaching a fence. He tweaked positions slightly and adjusted stirrups so that they were best able to influence their horses. They warmed up over a few galloping fences, working on pace, rhythm and straightness — not just about jumping the fence, but noticing the details throughout each effort.

The group moved on to a little ditch with a rail over the top — David’s standard for introducing ditches. The rail encourages the horse to keep its eye up and jump over the ditch, making it more inviting. With the ditch and later the bank, David stressed “instinctiveness,” where the riders had to feel the slightest change in the horse’s focus and immediately correct it.

No one had any trouble with corners, even up and down a mound on approach. The bank — bounce up, over a vertical, bounce down — rode a little awkwardly at first, as the afternoon shadow was cast on the takeoff side and caught horses off guard. Once riders adjusted, it rode like a fun bouncy gymnastic. Again, this was an “instinct” fence, where the riders’ reaction (leg, straightness) had to be instantaneous.

The group finished with the water. David first asked them to trot and canter through; he stressed that with ANY horse, even the week before a CCI4*, he would first pass through without any jumps. It’s about building confidence, he said, making the horses comfortable and never afraid. Same with ditches, too — jump the ditch by itself first, then add in the rest of the complex. A horse is never too experienced for baby steps, and making it a “game” for them keeps them happy and brave.

My favorite pair to watch on Thursday was Emily Renfroe and Walk The Line. Emily has had the 12-year-old chestnut mare since she was 5, and it shows. They have a wonderful partnership, and Emily’s appreciation for her was evident by her huge smile, as was the mare’s enthusiasm for cross country.  If you didn’t see them at Rolex in 2013, be sure to keep your eye out for them this season!