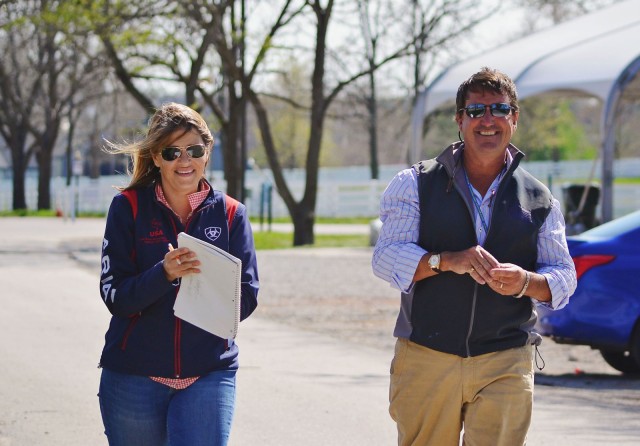 The USEF Eventing High Performance Committee approved Coach David O’Connor’s 2015 plan for the team in a meeting yesterday, and he outlined his goals for the season in today’s third and final session with the High Performance riders at the USEA Annual Meeting & Convention in Fort Worth, Texas.

Aachen is an invitation only competition, and it’s possible the team won’t get an invite based on the outcome at this year’s World Equestrian Games. If High Performance is able to send a team, the idea is to send the best four horses we have in the hopes of winning, David said.

‘Experience Will Count’ for Pan Ams

He spoke extensively about the Pan Ams in Thursday’s High Performance session, and he touched on it again today. “Obviously, we have to win it for a lot of different reasons,” David said, alluding to the fact that the U.S. must take gold in order to qualify a spot at the 2016 Olympic Games in Rio de Janeiro.

“Experience will really count,” he said, and the selectors are looking for horses and riders with a proven track record of consistently clear cross country rounds as a combination, which they track in a database that shows average dressage scores, cross country penalties and show jumping penalties.

“We do look at that kind of stuff as we start to put the picture together,” David said. “It needs to be four people that are going to be clear and inside the time on cross country — period.”

If the Pan Ams are a must-win scenario for Team USA, Doug Payne asked why David wants to send our best horses this year to Aachen and not Toronto. “Because I don’t think that the best four-star horse is the horse that could be the best two-star competitor,” David said.

“All the selectors will take that into account. If you have a hot shot two-star horse that is at the top every time it goes out and is scoring in the 30s, why wouldn’t you send them? Who has the best ability to completely finish under 45? That might be a pure two-star horse.”

Anyone who goes to Aachen could use that competition as a springboard to stay overseas and compete in England at Burghley CCI4* or Blenheim CCI3*, which is the same weekend as Plantation Field Horse Trials next year on Sept. 17-20, due to Blair Castle hosting the European Championships on Blenheim’s usual date.

As David said in Thursday’s session, the team won’t be targeting Saumur or Pau next year, as the riders have seen enough Pierre Michelet courses by now, he said, and he’s also not fond of the footing at Saumur and the course at Pau.

Badminton is once again on the same weekend as Jersey Fresh in May. As it looks like Badminton will stay on that weekend, David said Jersey Fresh will likely need to move its date in future years.

Other Things of Note

Thank you once again to David and Joanie Morris for allowing EN to sit in on the High Performance sessions. If you missed our first two reports on the sessions, click here for Thursday’s post and here for Friday’s post.