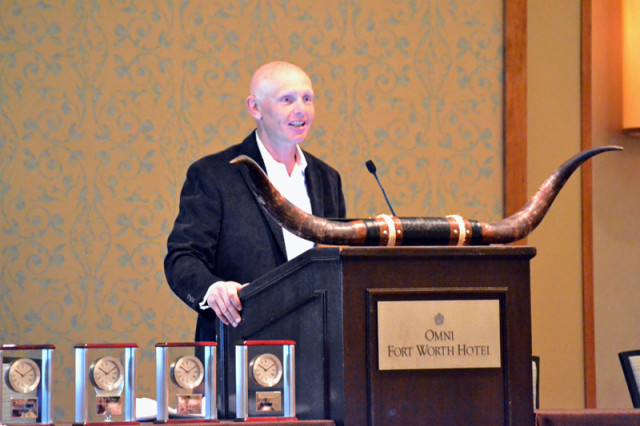 Leslie Law delivered an excellent keynote address this afternoon at the USEA Annual Meeting in Fort Worth, Texas, focusing on one of the most frequently asked questions he fields: What advice to do you have on becoming a top rider?

As a highly decorated eventer with Olympic, World and European medals to his name, Leslie said much of his own success ultimately boils down to the knowledge he acquired from various sources and people he’s crossed paths with over the years.

Leslie worked for Revel Guest in England as a teenager, and she introduced him to William Steinkraus, who came to visit the farm and asked if he could watch him ride. That turned into a series of lessons that ultimately helped develop the forward seat Leslie still uses today.

“You have to understand, this was a long time ago; I was British, and we go hunting, so we ride quite defensively sometimes,” Leslie said. And after watching Leslie ride like this, William said, “‘Never ride in front of your horse; always ride with your horse,’ and that stuck with me,” Leslie said.

“Sometimes I think there’s been criticism that I ride a little too forward on cross country, but I think it’s been a huge bonus in my riding.” The development of his forward seat only continued when Mark Todd called him up said he had George Morris coming for a clinic.

“The clinic was really a follow up of the forward seat,” Leslie said. And, as a bonus, that night at dinner, Leslie learned the little known piece of trivia that George Morris allegedly played the gas station attendant in the movie Psycho.

And as key American riders began traveling to England to base there, Leslie said his knowledge only continued to grow. “The first American I remember coming over was Bruce Davidson,” he said. “Watching Bruce ride was a lesson in itself — unbelievable.”

David and Karen O’Connor later moved to England, where they also upped the ante considerably, he said. “David raised the bar in dressage for all of us,” Leslie said. “We had to learn; we had to get better. To have these foreign riders coming to your country only helped us. It improved us.”

He also had Phillip Dutton and Kevin Keane come to look at a horse he was selling. “I hadn’t really watched Phillip ride before,” Leslie said. “For 45 minutes, I watched Phillip ride my horse — what a lesson. Then having Kevin talk about veterinary — a double whammy and more knowledge.”

Leslie said all that knowledge ultimately led him to the 2000 Sydney Olympic Games and later the 2004 Olympic Games in Athens, where he won the individual gold medal in eventing, which he considers to be the pinnacle of his career. So how did he get there?

“Looking back on everything … the majority of my knowledge garnered over the years comes from American sources by its people and places, and yet, continually, I hear in America the moaning they they do not have what the Europeans have,” Leslie said.

“I firmly believe that all of the knowledge one requires to become a top rider resides right here in your own country. What America is missing is the competition — the competition that brings the world’s best together and surrounds you in that atmosphere. I truly believe that’s the only thing we’re missing,” he went on.

“You have a wealth of top horsemen, riders, owners, top vets, top technology — every single resource one needs to be a top rider. Let’s create a stage and competitions that will attract the world’s top class competitors here, and I think it will bridge the gap you want to close between you and Europe and put you back on the podium where you belong.”