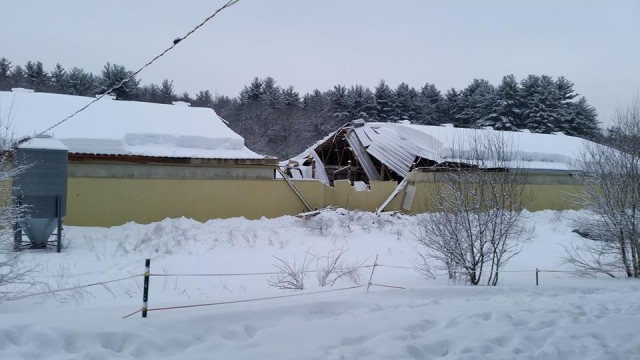 Boston is likely to surpass the seasonal snowfall record of just over 107 inches this winter, but this is not a record to be celebrated. Although the locals are used to heavy snowfall, more than 100 inches in 30 days has disrupted daily life, especially for horse owners.

In areas of the country where heavy snow is normal during winter, roofs are constructed so that the snow slides off, but because of the extreme cold temperatures and sheer amount of snowfall in a short period of time, the snow is freezing instead of sliding. Manually removing the frozen snow from the roof may help, but it isn’t always enough.

As a result, many buildings have collapsed or become structurally unsound, including barns and indoor arenas. Although the community is rallying to assist one another, the events have been devastating and not without casualties. But, one barn owner is determined to stay positive and keep his business going despite a recent collapse.

On the night of February 21, the indoor at Flying High Stables in Andover, Massachusetts collapsed, trapping three horses in their stalls and endangering four others.

Owner David Wilson discovered the collapse on Sunday morning and told a local news station that he went to check on the horses before calling for help. He gave them hay, checked their water and cleared debris from stalls before he “came to his senses” and left the building. 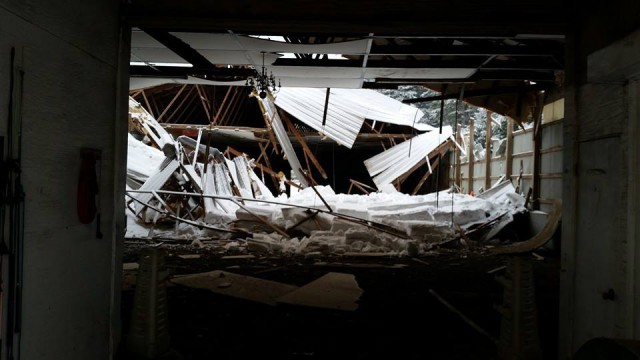 The view of the collapse from inside the barn. Photo via Flying High Stables Facebook

The local fire department and the Essex County Technical Rescue Team responded to David’s emergency call. The outer walls were braced and holes cut into the stall walls so the horses could walk directly out of the stall and into the sunshine.

Miraculously, no horses or humans were injured in the collapse or subsequent rescue efforts, and David, who was once an engineer, is convinced that even though the structure failed, the way it was built is the reason the horses were not crushed.

Imagine a rectangle cut into thirds. Two of the thirds on the right side of the rectangle was an indoor riding arena, and the third on the left side is a section of stalls. When the structure failed, the far right wall “let go” and dropped to the ground, but the left side where the horses were held up. In fact, the stalls remained in tact even though several stall doors were blocked by debris, which is why some of the horses were trapped.

“The nature of the failure is fairly interesting,” David said. “We think the trusses stayed in tact until they hit the ground under the load of snow. It sounds crazy but the interesting thing is that is possibly what caused our horses to survive without a scratch.”

As with the other recent barn emergencies, the community responded instantly to help, including the people from Gathering Farm, whose iconic indoor collapsed on February 10, and Bobby’s Ranch, who lost a building and two horses last Friday.

“It’s just incredible to me that folks who are probably still in the throes of their own recovery took the time to offer assistance,” David said.

Flying High Stables is an active lesson and boarding facility in Area I, and David is a huge advocate for off-the-track Thoroughbreds. Five OTTBs in his barn were relocated to two other local facilities, and several barns have offered their arenas for David to teach lessons.

The indoor at Flying High Stables has been condemned, and because David leases the property, the decision to rebuild, repair, or walk away is not his to make. But “the sun is coming up during the day,” so David and “The Blue Crew” have set missions for themselves around the farm.

Today, David, his students and their parents are hacking through snow banks to make room for a set of temporary stalls that have been offered to David so the five wayward Thoroughbreds can come home next week. David has also gotten his hands on a large industrial snow blower and is stripping 2.5 feet of snow from the outdoor arena so his students have a place to ride.

“The community has been really extraordinary, and the barn family has stepped up incredibly,” David said. “I’ve been saying all week it’s a bit of a George Bailey experience. You’re down because winter has been hounding you for a while, then something like this happens and you realize there is good out there.”

This was obviously a close call as all horses and humans walked away unscathed. However, the loss of the indoor will have a dramatic effect on the facility’s generation of income, and there is a long way to go before the business returns to normal.

A page has been set up on YouCaring.com. Any and all donations will go directly to horse care expenses including hay, grain, bedding and electricity in the barn.