Ever wondered what it’s like to be a working student for a top level eventing barn? The grueling hours, the non-stop learning curve, and the opportunity of a lifetime to learn from the best. We are delighted to introduce our newest series, The Working Student Diaries, in which we reveal the truth behind the experience from a first hand source. If you weren’t ever able to be a working student, or if you’re thinking about becoming one in the future, now is your chance to get the low-down, and we hope you enjoy it! 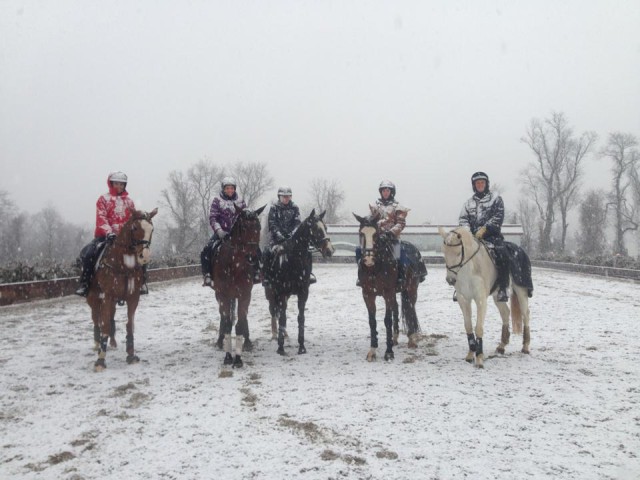 Bradley enjoying some winter hacks before the spring season with Boyd’s Advanced horse trot set. Brad is on Neville on the far left. Photo courtesy of Boyd Martin.

Bradley Champagne is a 20-year-old aspiring professional eventer who hails from Guelph, Ontario and currently competes his horse C Taz Go at the Preliminary level. He took a chance on applying for a working student position at Windurra with Boyd Martin and was pleasantly surprised to receive an offer last summer. In late September, Bradley began his work for Boyd and has enjoyed it thus far. I asked him to give us a little intro into his riding career and life, so that we can get to know both him and Taz as we go forward with the series.

My mom had been involved with horses long before I was born so I was immediately put into the “horse world.” I remember stories of me in a baby carrier on my mom’s back while she was hacking and me falling asleep. This definitely gave me the ability to sleep anywhere! Over the next few years I took lessons at a local farm. When I was six, I got a little, black New Forest/Welsh pony named Ace. Although he was your typical little pony who I got bucked off more times than I could count, he gave me the passion for riding.

When my mom heard about a three-day eventing clinic at the Caledon Hunt Club in Caledon, Ontario, I took little Ace. I can remember the dressage not really being qualified as dressage, but when we got out on that cross-country course we both fell in love with eventing. The coach for this portion was Ann Morgan, and Ace and I quickly got the nickname “cross-country machine.”

Just over two years ago I began the search for a horse that could have the potential to at least go Training, having competed through Novice previously. After spending a summer looking for this horse my mom and I purchased a 9-year-old Thoroughbred/Westphalian gelding named Taz. For a horse who had hacked until age 5 it was sort of a shot in the dark, but after I jumped him over an oxer during the first trial I got that “knowing” feeling.

He was purchased a few days later on August 31. In late September we did a small local Beginner Novice event and a Novice event a few weeks later. We upgraded to Training part way through the next season and finished our season with our first win. After going down to Florida with Karl Slezak Eventing that winter we gained a lot of confidence at the Training level. Once we returned back to Canada, we won a Training and upgraded to Preliminary.

In October of 2013 I was working for Karl Slezak in Canada and spent January through April in Ocala, Florida with him. In early April I started looking for the “next level” of working student positions. When I got a message about Boyd Martin having a position available I thought “can’t hurt emailing.” I have to admit I was surprised but extremely excited when I got offered a position. I felt like I needed to compete in a few more Preliminary events in Canada before I made the move to Pennsylvania. 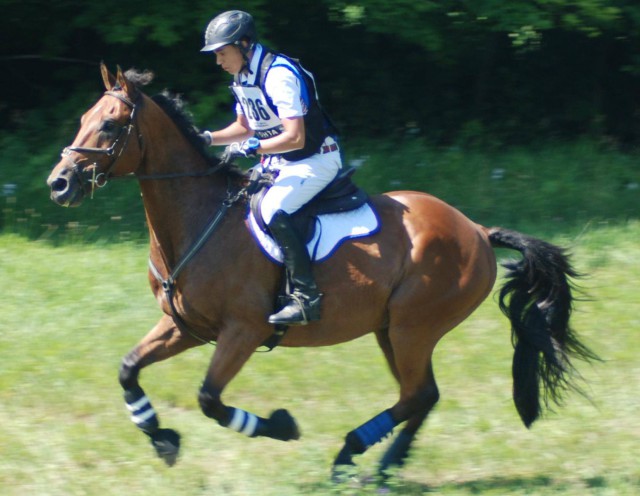 In late September of last year, I began at Windurra. I’m hoping to stay with Boyd for as long as I can because Taz and I have already improved more than I could have imagined. Besides improving as a rider, I have started to also gain knowledge about going from a rider to an athlete such as building your name, getting sponsors, managing your horse and managing a four-star level facility.

When I got to Boyd’s, my biggest weakness in eventing was show jumping. Taz isn’t the most careful jumper but we just had to figure each other out. Once we did, we slowly started to improve. Since we arrived in Aiken we really have improved in all three phases.

Having a detailed plan for the 2015 season really helped me get more determined and focused on improving and making the little things in my riding (leg and hand position) a priority to make a more smooth overall picture. For 2015 Taz and I are hoping to complete a CIC* event once we are back in Pennsylvania then travel to Bromont for their CCI*. For the longer term goal of 2015, we are hoping for an upgrade to Intermediate as a season conclusion.

Having goals for your competition year is important, but having goals for your long-term eventing career is equally important. I am like many younger eventers who dream of riding for their country at an international level, and being at Boyd’s has allowed me to turn this dream into a goal.

I am super excited to be a part of the Eventing Nation family, and I already have some awesome future blogs planned! Stay tuned for more insight into the Windurra Team and my journey with them!