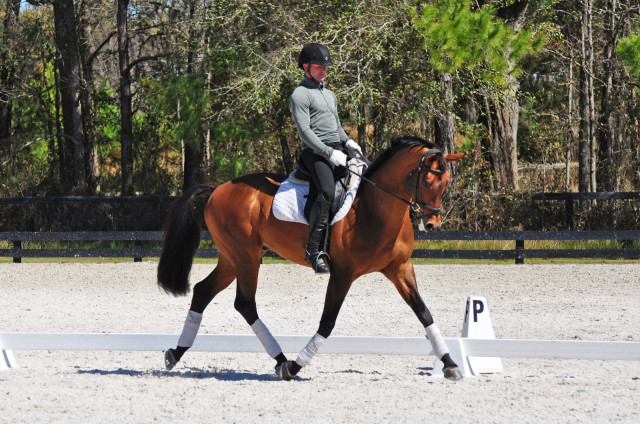 Michael Pollard showed his skills in the sandbox yesterday at the Rocking Horse Winter III Horse Trials, claiming the top two positions in Open Intermediate-B after the first phase. Halimey, a 10-year-old Trakehner stallion, scored a 20.8 for second place after dressage and went on to win the division. Songline, an 11-year-old Trakehner stallion, scored an incredible 18.3 for first place after dressage and ultimately finished third in the division.

Those are some impressive numbers, and Michael consistently scores in the 20s at this level. How does he do it?

At the conclusion of the USEA Young Horse Symposium in Ocala, Florida last week, Michael invited the attendees back to Pollard Eventing to meet some of the Chatsworth Stud stallions in person and watch them work. An eager group that took him up on his offer were treated to a mini dressage clinic.

Michael rode Halimey, Rusticus and Songline, all of which are Trakehner stallions that are fairly different in type. Halimey and Songline are successfully competing at the upper levels while Rusticus is a 4-year-old that is working on the basics.

For all three horses, Michael focused on maintaining control of the hind leg and riding that balance and energy forward into the bridle. He used the corners to help him reinforce that control and set the horse up for whatever movement came next, be it lateral work or a lengthening. 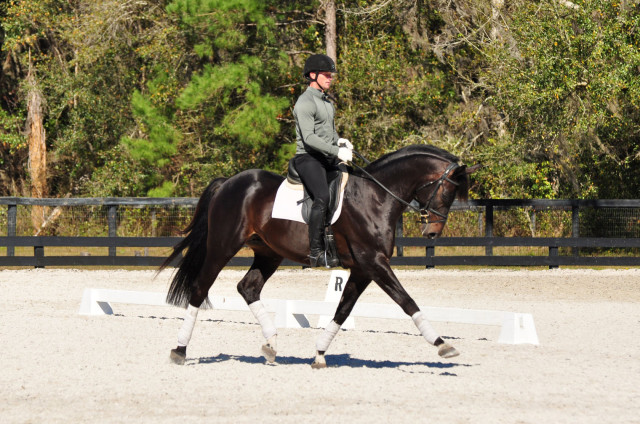 On a day that the horses do only flatwork, Michael said he pretty much always works them in a standard dressage ring, which they keep set up in the large schooling arena at least three days a week. He does this so the horse is used to working within that space and isn’t surprised by how quickly the boards come up when it gets to a competition.

Even though he works the horses in the full dressage ring, however, he doesn’t practice the test movements every day. Instead he focuses on the horse’s response to the aids as well as strength and suppleness.

Michael worked with Halimey, who had just completed his first Advanced horse trials the week before, on being soft and supple. He asked him to flex his neck and bend in his body at all three gaits as he quietly worked on transitions and lateral work.

If there is a show on the weekend, Michael said he likes to practice the test movements on Tuesday, jump on Wednesday and have a day like this where they work on being soft and supple on Thursday.

Songline, however, who is owned by Gustav Schickedanz, is naturally quite supple with tons of suspension and cadence. Michael started off working him in more of a collected frame to find his balance and strength, working once again from the hindquarters forward into the bridle. 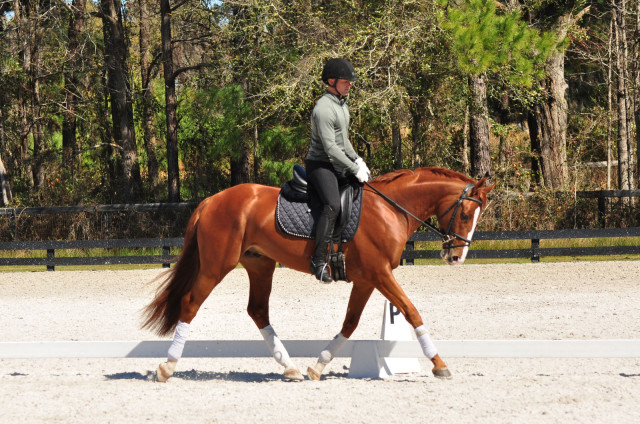 Michael worked Rusticus, owned by Christine Turner, in a longer, lower frame than the other more experienced stallions. As this young horse gets stronger, his balance in the transitions will improve, but at this stage Michael is more concerned about the horse’s response to the seat and leg aids.

In the canter transitions, especially, Michael said that people get caught up in having the horse take a canter step in the first stride. Michael would rather the horse go forward and keep pushing through the contact, even if they take several steps of trot before they finally canter, rather than throw their heads up above the bridle and invert their bodies to take an unbalanced canter step in the first stride.

In the downward transition from canter to trot, Michael leg yields almost immediately so the horse finds a cadence instead of falling onto the forehand. So even though he works a young horse like Rusticus in a lower frame, they are still soft and pushing from behind, which helps them build strength.

Thanks for the tutorial Michael! And as breeding season fast approaches, be sure you check out the stallions at Chatsworth Stud.