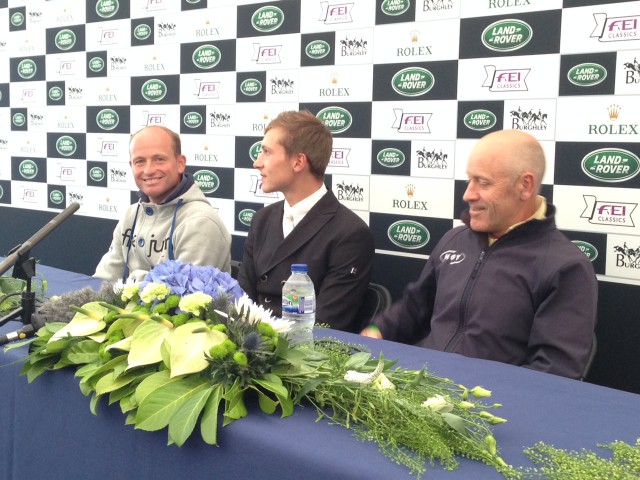 While it was widely expected that a certain German, ahem Michael Jung, would be attending the press conference this afternoon, perhaps Niklas Bschorer, his young compatriot who lies 3rd overnight, was more of a surprise. He might be the youngest rider here but he shouldn’t be sucha shocker though.

He and Tom Tom Go did a spectacular test at Badminton this Spring and since leaving Chris Bartle’s base in Yorkshire he’s been based with Mark Todd at Badgerstown, and also gets help from his father; if you’re wondering who the next Michael Jung is, he may well be it.

Since Badminton he’s been working on non-specific flat work, and says he was pleased with his test today, “I’ve just been working on general things like keeping him relaxed, working on the outline, working on his paces and submission. At the end of the day he knows what to do in there and I thought he did a good job.”

His thoughts on the cross country, “It’s a very big course — there’s plenty to jump out there, plenty to gallop, and I think it will be very interesting, you have quite a few options at quite a few fences so it will be interesting to see where some of the riders might go. I’m looking forward to Saturday.”

Interestingly 2nd placed Andrew Hoy did his first Burghley when he was the same age as Niklas (he was 20 in 1979) and he won it that year. He was a winner again in 2004 and said it’s much different here today that it was even 11 years ago, “I can remember that I was riding a very different horse then, I was riding Moonfleet, a TB bred for racing; he was a horse that was v elegant to watch and to ride. With Moonfleet I just had to sit very still and not throw him out of his rhythm and balance, whether it be in the dressage, cross country or show-jumping.

“Today I feel the competition has moved on so far from where it was in 2004 — the sport is very different, the quality of the dressage has improved enormously and I know that the test that I rode today was a long way ahead of what I did in 2004.”

Andrew made it clear how grateful to his groom and what a team effort today’s result was, “I’ve been getting regular help from Gareth Hughes and like all of us here, any success and the performance today is not about one individual and one horse, it’s about a complete programme and a complete support team. My groom Avril Smith has only been with me for 12 months but she has got the best attitude of any groom that I think I’ve ever had working with me.”

Michael Jung professed to be happy with today’s test, especially as he said Fischerrocana is not used to going on a grass surface, “I think that this was nearly the best that we can do with the mare on a grass field. She was very relaxed and very focussed on everything I asked. I could do everything that I’ve worked on before, and I’m very happy about her.”

He did however also remark that today’s footing in the arena was exceptional, “The ground is not normally as good as it was today – today it was soft but you had a good grip so my horse felt very happy on it” He added that obviously she’s perfectly used to going cross country on it too, and as for Saturday’s course?

“I think there are many difficult fences, I think this is a really tough four star course but very nice, you have a few options depending on the experience of the horse and rider. I think we have a good beginning with big but friendly fences so you can have a good feeling in the beginning and a nice gallop. We will have a lot of fun and I’m looking forward to it.”

Before then of course we have another day of dressage to go, and we’re massively excited to cheer on the rest of our US representatives Laine Ashker on Anthony Patch, and Colleen Rutledge on her homebred Covert Rights, and of course not to forget our honorary American, Irishman Tim Bourke and Luckaun Quality.

Dressage starts tomorrow at 9am GB time and we can’t wait to bring you as much coverage as we can. Thanks again for being with Eventing Nation today on the first day of Burghley, it’s been exciting, a little bit chilly, incredibly well-organised and welcoming, and definitely one of our very favourite events on the calendar – Go the Land Rover Burghley Horse Trials and GO Eventing! 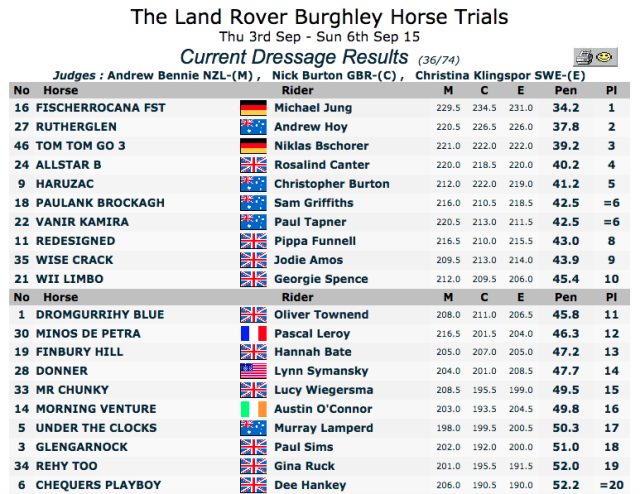