Burghley has released the preview video for this year’s cross country course! Click to watch Capt. Mark Phillips explain his thought process for each fence on this year’s track, which will run in the reverse direction for the first time in a number of years. That means the big hill comes up on course much earlier than in years past, and considering the time is always tough to make at Burghley, the new direction is almost certainly going to shake things up.

Usually horses and riders head to the main arena after the first few fences, but but this year they’ll go the Lion Bridge, the first combination on course and also a new addition this year. Fence 4A is a table on the hill, then down to splash through the water and over a boat in front of Burghley House, which should make for a nice photo opportunity and viewing area for spectators.

The next two key elements on course also involve water at the Anniversary Splash In and Out at fences 5AB, 6AB and 7, when riders will jump two hedges at 5AB, go up and over an island in the water, with the option to jump out over a bounce of hedges at 6AB on the left or jump a step out and then continue on to a hedge on the right. That path to the right will take a bit longer, and this complex has the potential to eat up quite a bit of time early on the course. 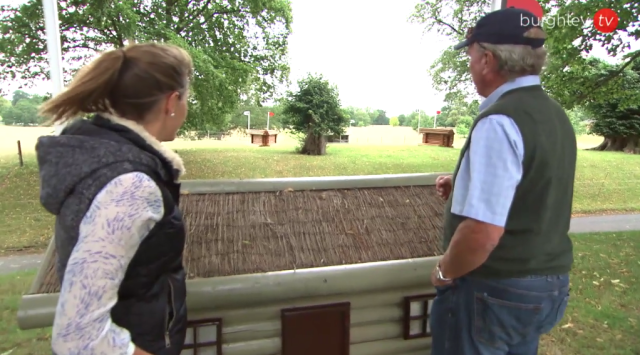 The path to the left at Capability’s Cutting. Screenshot via Burghley.TV

The Slate Mine at fence 8 is the first max fence on the course, set at 2 meters wide and 1.20 meters high. Then horses and riders will head to Capability’s Cutting at fences 9 and 10, which feature two different paths to take. On the left, riders jump over a house at fence 9 and down to the bottom of the cutting, which gives three to four strides to get organized before the corner at fence 10. Going to the right gives more landing space off the house at fence 9, but just one stride to get ready for the corner at 10.

Going too quickly at this section of the course means horses will be more likely to hit a wall at the 8- and 9-minute markers, but riders also have to be careful not to get too down on the clock here, as there aren’t that many opportunities to make up time later on this year’s course. This year’s track definitely requires very careful clock management. 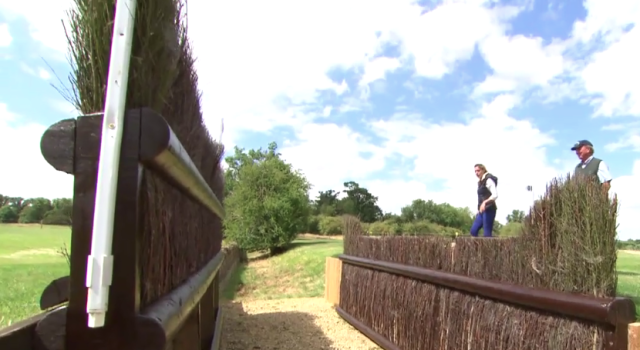 Next is Cottesmore Leap at fence 12ab, which comes at about the 3 1/2 minute marker on course. The famous ditch and brush is set at a max height of 1.45 meters with a max base spread of 3 meters, followed by five strides on a bending line to the right to a triple brush that is “big and very missable,” as Capt. Mark Phillips puts it.

The Land Rover Dairy Farm starts with quite an imposing 1.20-meter gate coming up the hill at fence 14A, followed by a big table with the terrain dropping away off the back at BC, which the horses won’t be able to see until they’re in the air. Then it’s on to the Rolex Combination at 15ABC, where finding the right line is crucial at the AB element to avoid ending up in the ditch, not to mention finding the right line for the curving four strides to the corner that follows. 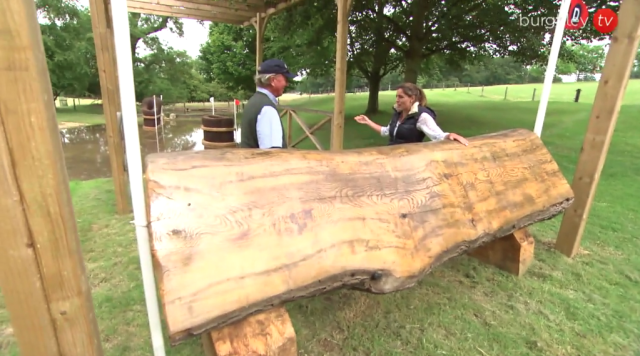 The big log coming up out of the water at the Land Rover Trout Hatchery. Screenshot via Burghley.TV

Maltings 360 at fence 16, 17AB and 18 will likely be a popular spot for spectators since there’s so much to see here. There’s a big white classic Burghley oxer at 16, followed by a triple brush on the mound at 17A, with three strides to a brush corner at 17b. Then 18 is another max width white oxer. The Captain’s Log, a trakehner at fence 19, is one of the few let up fences on course.

Capt. Mark Phillips says the Land Rover Trout Hatchery at fences 20ABCD and 21 is a candidate for the toughest question on course, as there are five elements that come up quickly one after the other. There’s four strides from the brush at A to the jump into the water off a right turn at B, followed by four strides left to a step with a bounce to a big log at C and D. The the hedge at fence 21 comes after two quick strides on dry land and one stride back in the water. 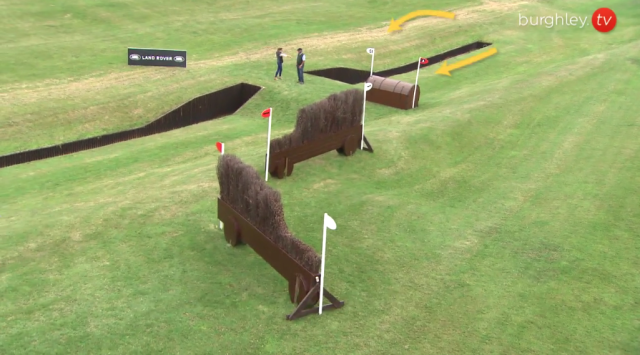 Fence 22ab at Herbert’s Hollow is virtually the same as last year except in reverse direction, with six strides after the hedge to an open oxer. Discovery Valley at fence 24AB almost always causes trouble on course and should be no different this year. The combination will ride quicker if horses and riders stick to the lower side of the terrain, but the line opens up much later if choosing that path. Finding a line quickly is critical, as the double brushes are separated by just one stride and set on a severe angle.

Fence 25 is the iconic Elephant Trap, set before the climb to the Leaf Pit at fence 26AB and 27. Riders will have just two strides after the moon fence to prepare for the massive drop down into the pit before galloping on to the sun at fence 27. This is at the 9-minute marker on course, about 2 minutes from the end, so riders will definitely be trying to making up time. Riders will then go back through Discovery Valley at fence 28, which will require some set up, so they can’t come in guns blazing. 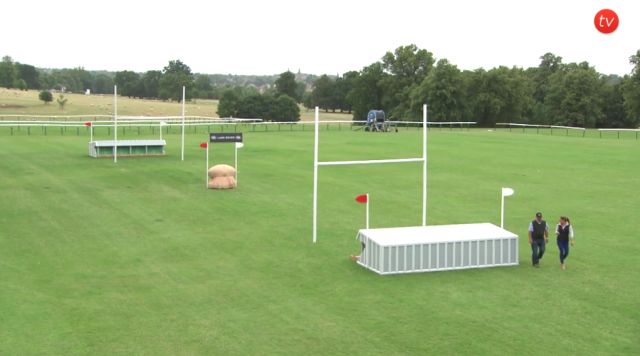 Fence 29, Up & Under. Screenshot from Burghley.TV

Then riders will head through the main arena at fence 29, Up & Under, which is built to resemble a rugby pitch in celebration of Land Rover’s partnership with the Rugby World Cup. Horses will jump over a table built to resemble grandstands, then take four strides to jump over a rugby ball, with another four strides taking them out over a second grandstand table. Then they’ll kick on for the final two fences.

The course is provisionally set at 6,370 meters with an optimum time of 11 minutes, 10 seconds. Capt. Phillips has hailed it “a real four-star track, a real Burghley,” going on to say that because “the hill comes at the beginning, riders are going to have to figure out where to take time out and where to make up the time.”

In addition to watching the preview video above, you can click here to see beautiful photos of each fence, and there’s also a very cool animated flyover video here that shows you the path horses and riders will take across the hallowed Burghley grounds. What do you think of this year’s course, EN? Weigh in with a comment below!