We just learned that Tamie Smith's former upper-level ride, Chaos Theory, was euthanized due to complications from colic. He had been enjoying a well-earned retirement in Tennessee, and Tamie wrote this beautiful tribute to the horse who gave her wings. Thank you to Tamie for sharing, and thank you for reading. 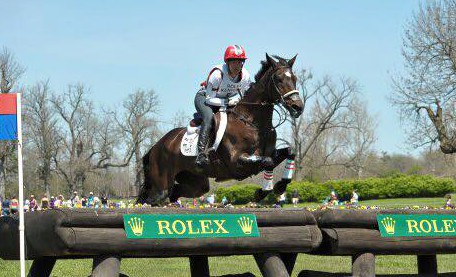 Tamie Smith and Chaos Theory at Rolex in 2009. Photo via Tamie Smith.

“Buzz” & “Buzzard” were just the common nicknames I had for this special horse. He was quirky, I think very misunderstood, and the sweetest animal on the planet. He had a magnificent gallop and an unconventional way of jumping, but had scope to burn. He wasn’t the ideal looking dressage horse, but he let go a lot of his physical limitations and tried harder for me more than any horse I’ve ever ridden.

He came to me at 14 years old and introduced me to one of my best friends. I spent months in the round pen re-breaking him as though he was a three-year-old getting backed for the first time. I learned everything both on the ground and on his back that I know now. He gave me the chance I needed to get to the top. My trainer at the time said, “He’s not ‘the one’ but you don’t have the money to buy that, but he’s going to take you there and everyone needs to start somewhere.”

I was 29 years old at the time and had never ran Advanced. I had gone to college, got a degree, got married, had my kids, and rode after my 8-5 job everyday. I rode every weekend and after I had my son Tyler my husband said he thought I should become a pro. Buzz was my chance.

When one door closes another opens, people tell me, and most often I find that to be true.

The person who owned Buzz had stopped eventing due to a tragic accident and my longtime friend Margie told me I should call and ask about him. Buzz created a bond between Jessica and I and we’ve never looked back.

Buzz taught me so many lessons. I often find myself reflecting back on those lessons and know that if it were not for him I would not be what I am today, both as a person and a horsewoman. We struggled at the beginning to find our partnership, but by eight months we clicked. He took me to several two-stars, twenty seven three-stars and eventually my first CCI4*.

He gave 110% of everything he had everyday. Somedays that was not a lot, but most days it was more than he had. He was hard to sit the trot, he was hard to get on the bit. The type of OTTB you see that does his job because of heart.

I committed myself to getting to Rolex Kentucky and giving it my all. I felt like I owed it to him. I knew it would be an “experience lesson.” He gave me the best ride I could have asked for. I believed in him and he believed in me. I committed to him that after my debut at Rolex I would retire him from FEI competition and when I returned home I said I wasn’t going back until I was ready to be a threat, he gave me his approving nudge and I haven’t been back since.

He was always a giver. I lent him to my friend Gina Economou to have a horse to run Advanced again so she could get her confidence back at the level. He then retired sound and happy without ever having a soft tissue injury and went off to Tennessee to live in huge grass fields with a dear friend Joan Childs at Finish Flag Farm.

“Tamie, I’m so so so sorry, but we had to put him down. The meds were wearing off and he was showing signs of pain…he was such a tough guy that he never complained, but I could see how much he was hurting as his vitals began to worsen. I read him your email and gave him lots of tearful hugs. His pasturemates are all upset as well…we will all miss him so very much. The night is very clear and there are thousands of stars out. I know we are in a peak meteor shower period, but I choose to believe the one I saw on my way in to write this was him galloping off to the great pasture in the sky.”

It’s heartbreaking to know he has left but I know he is with all of the legends who have made dreams come true.

RIP Buzzard. You gave me wings!