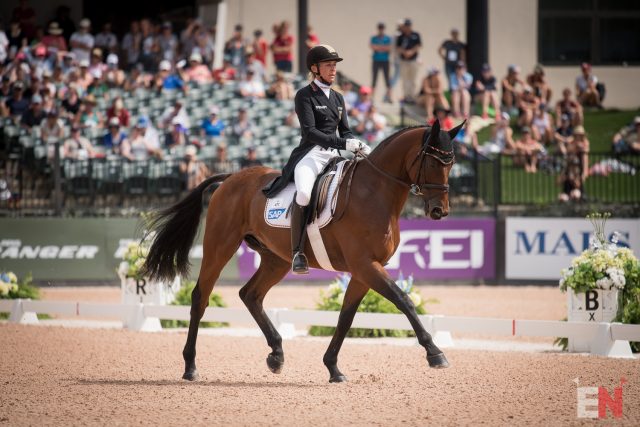 We knew Ingrid Klimke and SAP Hale Bob OLD were the only pair capable of catching Julia Krajewski and Chipmunk FRH‘s leading day one dressage score of 19.9 at the 2018 FEI World Equestrian Games, and the stands were absolutely packed to watch their test this afternoon at Tryon.

Ingrid and “Bobby,” a 14-year-old Oldenburg gelding (Helikon xx X Goldige, by Noble Champion) she owns with Andreas Busacker, delighted the crowd to secure a CCI4* personal best score of 23.3 and hold second place overnight at the conclusion of dressage.

“He was so relaxed, so calm, so concentrated that I could really ride him,” Ingrid said. “Now he is 14, so he is very mature and knows his job. He did a beautiful job for me, and it was very fun. I love to ride dressage, so for me it was a pleasure.”

Ingrid gave Bobby subtle pats after the stretch circle and flying changes — a beautiful testament to their partnership. She is well known for her prowess in this phase and competes at the Grand Prix level in pure dressage as well, and Ingrid said the key to improving your score is to constantly ask “what can I do better next time?”

“I think you have to be very precise in your training and do everything very accurate and correct,” Ingrid said. “You have to repeat and repeat and really work on it. I have a big belief that you have to train the test with the horse a lot, because they must exactly know what’s coming. Some people think it the other way around, but for sure they anticipate anyways.” 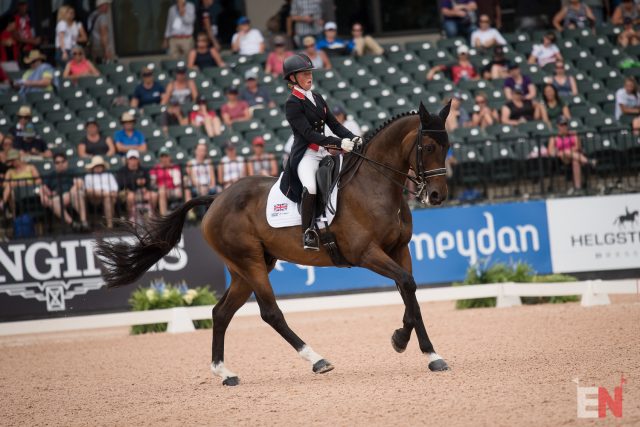 Ros Canter and Allstar B. Photo by Jenni Autry.

Great Britain sits in team silver position at the conclusion of dressage thanks to Ros Canter and Allstar B, who delivered a relaxed, fluid test to sit in third place on 24.6. That just missed their CCI4* personal best of 23.9 from Badminton this year, and Ros said she was delighted with “Alby,” a 13-year-old Dutch Warmblood gelding (Ephebe For Ever X Narenca B, by Ekstein) she owns with Caroline Moore.

“It’s really my job to make sure I get a mistake-free test from him because he’s just so amazing,” Ros said. “In the atmosphere he never changes. I gave him a day off yesterday because he worked so well the day before. He’s just got that temperament where he puts 110% in for me every time, and it’s more the pressure for me really that I want to go and do him proud and everybody else that has helped me get here.”

The U.S. team sits in bronze medal position after dressage with three riders sitting in the top 20. Boyd Martin and Christine Turner’s Tsetserleg did their test yesterday and held onto a spot in the top 10, sitting eighth on 27.1 as the highest placed U.S. combination. (Click here to read Boyd’s comments on his test in yesterday’s dressage report.) 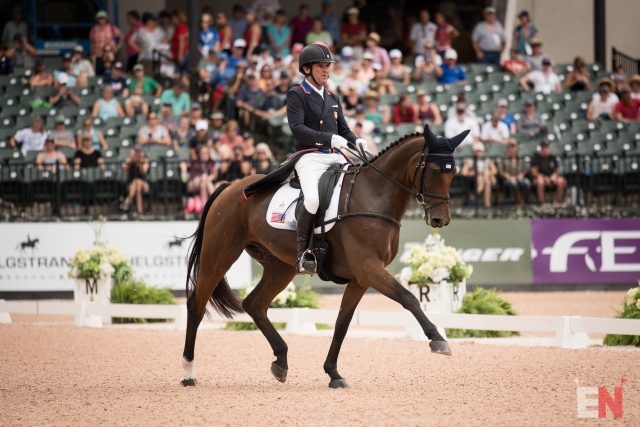 Phillip Dutton and Z were trending in the 24 range until the flying changes, which shows you just how much more there is to come for this horse. Z, a 10-year-old Zangersheide gelding (Asca X Bellabouche, by Babouche VH Gehucht Z) owned by The Z Partnership, sits in equal 12th on 27.6, a 6.1-mark improvement from his CCI4* debut at Kentucky.

“He’s such an improving horse,” Phillip said. “He just loves to work and loves to train, and it’s really exciting. I couldn’t be more pleased with the way he went in there. It wasn’t perfect, but you can’t expect him to be perfect with the level of education that he has either.”

The home crowd here at Tryon has been amazing in cheering for our U.S. riders, and when Lynn Symansky entered the ring with Donner — who is very sensitive to noise — she raised her hand in an attempt to quiet the stands. The enthusiastic crowd mistook her shushing motion as a wave, which sent them roaring in response. Cue Lynn moving to a not-so-subtle hand gesture asking the crowd to be quiet (which we captured on EN’s Instagram story). 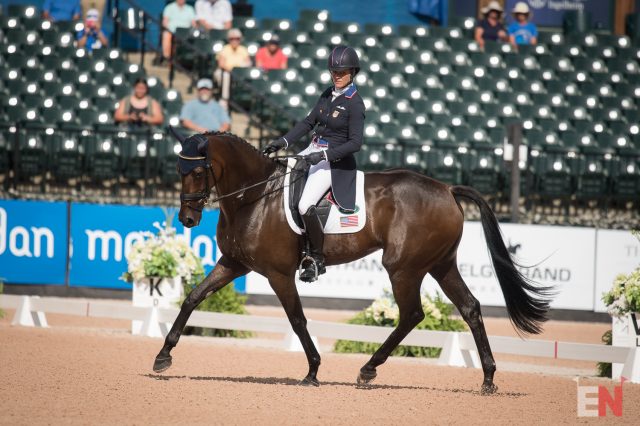 The crowd dutifully quieted right down, and Lynn and Donner, a 15-year-old Thoroughbred gelding (Gorky Park X Smart Jane, by Smarten) owned by The Donner Syndicate, proceeded to delivered a CCI4* personal best score of 28.3 to sit in 20th overnight.

“I love (the cheering),” Lynn said, “and it gets me wanting to perform more, but he just gets a little unsettled by noises and gets a little claustrophobic. … It’s such an honor to be riding here in front of the home crowd.”

Lynn said she was delighted to deliver a personal best with Donner, but made it clear her first focus is the team competition — a sentiment echoed by all the U.S. team riders.

“I think we all are very competitive-natured people, so we’re trying to do our best but also keeping in mind what our goal is here. It is to be as competitive as possible but also complete the team, which we weren’t fortunate enough to do in Normandy where I was a part of that team as well,” Lynn said. “We’re coming back with a vengeance and hope to really represent in front of the home crowd.”

(Quick outburst — USA! USA! USA! — and back to our regularly scheduled programming …)

Will Coleman and The Conair Syndicate’s Tight Lines sit in 64th place on 35.6, and will go out as pathfinders for the U.S. on cross country with a mission to deliver a fast and clear round for the team.

Lauren Kieffer and Jacqueline Mars’s Vermiculus, our individual combination on the U.S. team, sit 48th on 32.6 at the conclusion of dressage. (You can read comments from both Lauren and Will in yesterday’s dressage report.) 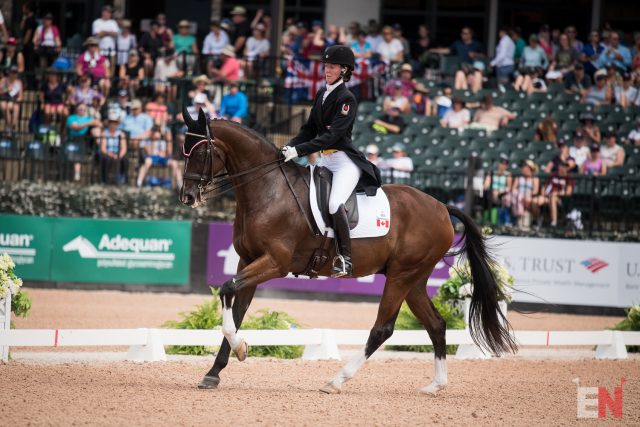 Canada’s team sits in 13th place after dressage, but this is absolutely not going to be a dressage show. Just 24.7 penalties separate the Cannucks from the leading German team, so it’s all to play for tomorrow on cross country.

Bobbles in one flying change and the final halt proved costly, and Selena said she was a bit disappointed to leave marks on the table.

“As soon as I asked for the (final) halt, he put his head down like an ostrich and trotted into the halt. It was not my best test, but we all know it’s not a dressage show,” she said. “He’s got a heart of gold, and he’s a really elegant horse. I know him really well, and now I’m just nitpicking because now I’ve got a taste of victory and I just want it all the time.” 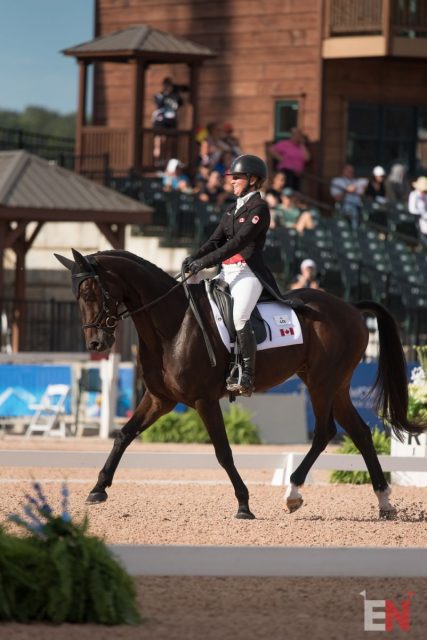 “Pavarotti really had his game face on today,” Jessica said. “He felt amazing in his trot work. I thought his walk was his best ever, and he was really good in the canter work. He’s feeling pretty fit, so his changes didn’t really quite come off the way we had worked through them, but other than that he couldn’t have been any better.”

Hawley Bennett Awad and The Jollybo Syndicate’s Jollybo delivered a personal best of 32.7 yesterday and now sit in 50th place as individuals for Canada.

Colleen Loach and Peter Barry’s Qorry Blue d’Argouges will go out as pathfinders for the Canadian team and sit 60th on 34.4 after dressage.

Lisa Marie Fergusson and her own Honor Me scored 40.2 and sit 80th after dressage. (You can read comments from Hawley, Colleen and Lisa in yesterday’s dressage report.) 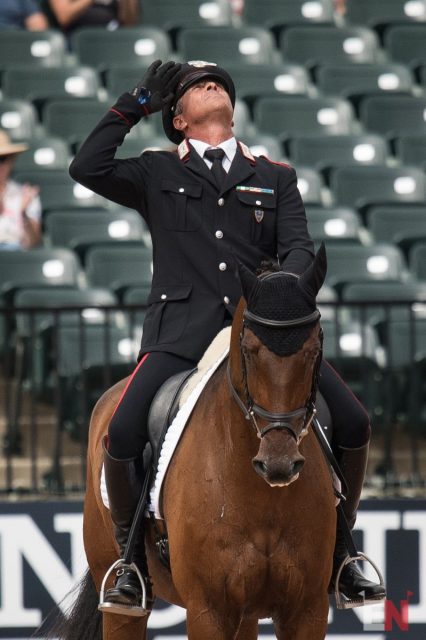 Click here to view individual scores at the conclusion of dressage and here to view team scores. Every score has a story to tell. Behind every number there is a story of dedication, determination and the sacrifices made to reach the world stage. The family members, friends and support teams who helped the riders get here are an integral part of that story.

If you watched dressage today, you might have noticed Stefano Brecciaroli wiping tears from his eyes following his test with Byrnesgrove First Diamond. His mother passed away today, and Stefano raised his head and hand to the sky in tribute to her after completing his test. We can’t imagine the range of emotions he must be experiencing while competing at WEG an ocean away from his native Italy. Please join us in sending condolences to Stefano and his family.

We still have much more to bring you from WEG, including more quotes from the riders from Friday’s dressage action, as well as their thoughts on Capt. Mark Phillips’s cross country course. Keep it locked right here on EN. Go Eventing.