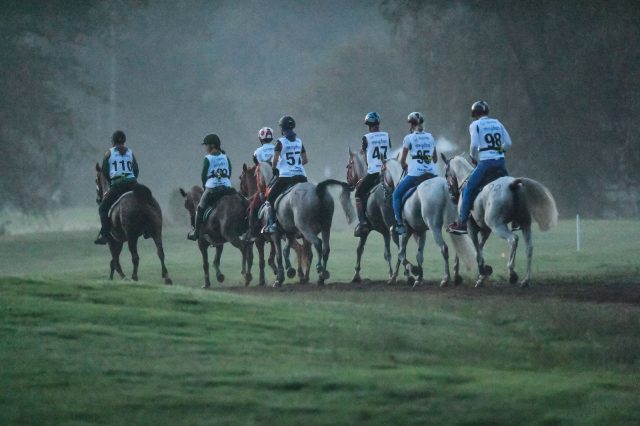 The start of Wednesday’s endurance race. Photo by FEI/Martin Dokoupil.

The FEI has confirmed that the WEG endurance horse Barack Obama, ridden by Jenny Champion for Team New Zealand, was euthanized this afternoon. The 20-year-old Anglo-Arab gelding was transported to the on-site endurance veterinary clinic after the second loop of the 120-kilometre race and treated for kidney problems, then transferred to the Tryon Equine Hospital for further treatment.

The horse’s owner, Mark Round, in consultation with the athlete and veterinarians, today elected for euthanasia. In accordance with FEI Veterinary Regulations, a post mortem will be conducted and samples will be taken from the horse.

The horse had been competing in international endurance events since 2009 and had 16 FEI event starts, including six 160-kilometer rides. Jenny garnered six wins with the horse since taking over the ride in 2014. Equestrian Sports NZ shared a story about the pair’s journey to WEG here.

Equestrian Sport NZ High Performance Director Sarah Dalziell-Clout said the entire team is devastated by the loss. “He passed a comprehensive vet test prior to leaving NZ and was in good health leading into the race, passing the first two vet checks at the competition,” she said. “Leading into the race the team vet Nick Page was confident the horse was race-ready.”

She described Jenny as a true horsewoman and noted that the rider pulled him up immediately after sensing that something was not right, well before the race was canceled. She sought veterinary assistance and the horse was treated as soon as possible.

FEI President Ingmar de Vos, FEI Veterinary Director Göran Akerström, and President of the Endurance Veterinary Commission Thomas Timmons addressed the media at a press conference this afternoon. They emphasized that equine welfare was the reason for the race’s abandonment, citing the combination of extreme heat and humidity, an unusually high number of horses displaying clinical signs of metabolic issues, and the additional exertion required of the horses following heavy rainfall. Of 95 starters, over 50 horses received veterinary treatment during or after the race.

The circumstances surrounding the misdirection of riders, which solicited a restart and shortening of race distance, are still being investigated. Click here for EN’s original race report.