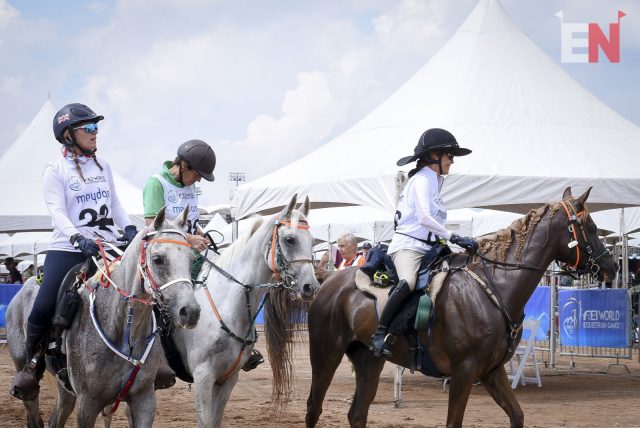 Endurance riders beginning the second leg of the race at WEG. Photo by Shelby Allen.

In an unprecedented turn of events, the endurance competition has been cancelled mid-race at the 2018 FEI World Equestrian Games. What began with a false start after some riders were “misdirected” on course early this morning, ended in controversy as the FEI officially abandoned the competition this evening.

In the early parts of the race, many riders were sent down the incorrect path, and because of this it was decided that the competition would be restarted and shortened from 160 kilometers down 120 kilometers.

Riding resumed at 11:15 a.m. EST, and the race continued throughout the day, but by 6 p.m., the FEI had cancelled the competition altogether. A statement released cited FEI General Regulations Article 109.12, which allows cancellation in cases of extreme weather.

“This was a difficult decision to make, but it was done with horse and athlete welfare in mind as the conditions this afternoon after the rain resulted in extremely high levels of humidity and, combined with rising heat, it was deemed unsafe to continue the ride,” said Thomas Timmons, President of the Veterinary Commission.

At the time of the statement, multiple endurance riders remained on course, with the leader, Spain’s Alex Luque Moral, more than halfway finished with the final 28.2 kilometer loop.

Questions remain as to the official time at which the competition was cancelled, and why many horses remained on course for nearly an hour after the announcement. Riders were outraged, and chaos ensued around the vet box when the decision was made — resulting in local police being called to the scene.

The Independent Equestrian Community Integrity Unit (ECIU) has been tasked with a full investigation into the circumstances that resulted in some riders being misdirected in the early parts of the course. The FEI has said that the investigation will be made public after it has been presented to the FEI Bureau, and will include interviews with officials, volunteers, Organizing Committee and all other relevant personnel.

UPDATE (Sept. 13 4:30 p.m.): The Real Spanish Equestrian Federation has lodged an appeal against the FEI’s decision to abandon yesterday’s endurance competition. Had medals been awarded at the time of abandonment (no official timestamp has been disclosed), Spain would have won team gold.

In its appeal, Real Federación Hípica Española noted that more than 80% of the distance had been completed by the race leaders at the time of cancellation. They also pointed out that while there is no legal precedent for the situation, but in previous competitions cancelled for reasons other than the weather medals were awarded according to placement at the moment of suspension (they cited the 2012 FEI World Endurance Championships as an example). “All of them are the reasons why we ask the FEI to reconsider its decision of not awarding medals to this championship,” the appeal concludes.