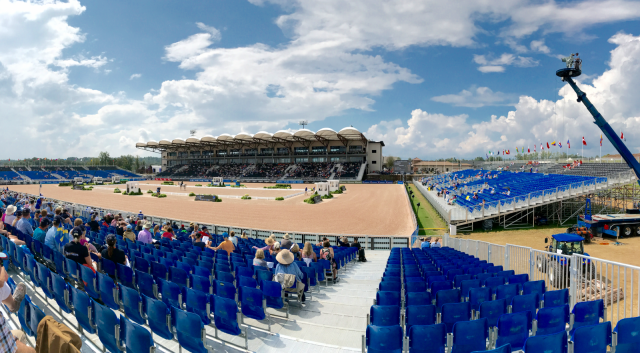 Welcome, valued spectator, to the 2018 World Equestrian Games at Tryon!

We hope you are not unduly stressed after the first leg of today’s adventure, a journey from parking lot to shuttle to ticketing gate that Wednesday spectators report took upwards of two hours. Hopefully, the logistics department will get all that sorted before dressage begins tomorrow, as well as address concerns that parking conditions will go to pot with more rain. Yeah, we see you Florence. “We all have rental cars that don’t do mud,” we heard one understandably anxious spectator comment to the information booth. “They’ve got to get some gravel in there, or they’ll be towing people out.” Normandy remix!

As far as traffic goes, it was fairly smooth sailing today, but that can and likely will change as the event gets underway. Allow extra time and consider downloading a live traffic navigation app like Waze.

Parking #Protips: DON’T tell Siri you want to go Tryon International Equestrian Center. Spectator parking is at Lot F (6881 S. NC Hwy 9, Columbus, NC), the new steeplechase course behind the Tryon Riding & Hunt Club office on Route 9, about 15 minutes away. Parking is $20 and they accept cash and cards. You’ll catch a shuttle from Lot F to the gate. Shuttles start 2.5 hours prior to competition and end 2.5 hours after the last competition ends each day. If you’re getting dropped off or catching an Uber, you’re looking for Lot E (3580 Pea Ridge Rd. Rutherfordton, NC, 28139). Wheelchair access is available at both lots. Click here for additional parking info. 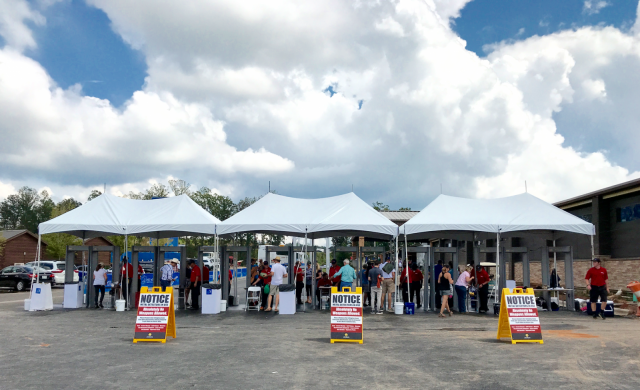 You made it! Photo by Leslie Wylie.

Ah, finally, you’re at the gate! If you’ve been in parking lot gridlock and/or on a bus and nature called, like, an hour ago, take comfort that there are ample port-o-potties along this stretch.

To enter the venue you’ll need to pass through security, which includes a metal detector and a little rummage through your bag. Have a glance at this list of allowed/not allowed stuff, most of which is common sense. Officially there is a clear bag requirement, but Wednesday’s security duty didn’t seem to care much about enforcing that one. One security guy we talked to rolled his eyes and said it was bunk; another said, more carefully, “We prefer you have a clear bag.”

You can print a copy of your tickets to show upon arrival or you can add them to your Apple wallet.

Packing #Protips: Think cross country day at Kentucky — good walking shoes or gum boots, sunscreen/hat/sunglasses, hand sanitizer, water container — we saw no water filling stations, but we’re eventers, we’ll drink from a hose to save $4 bucks on bottled water. Update from a reader: There is a water refill station behind Roger’s Diner. If you have a lightweight folding chair, that seems like a smart idea with all the mud. If you find yourself in dire need of something, don’t panic — the General Store probably has it. Today vacillated between downpour and sun-drenched steambath, and remember, we’re in the path of a hurricane, so all-weather gear is a must. In a clear or not clear bag. (Don’t quote us on that — the rules around her do tend to change as they go. See: today’s endurance competition.)

Moving right along … you made it! You’re in! Game face! Let’s go! 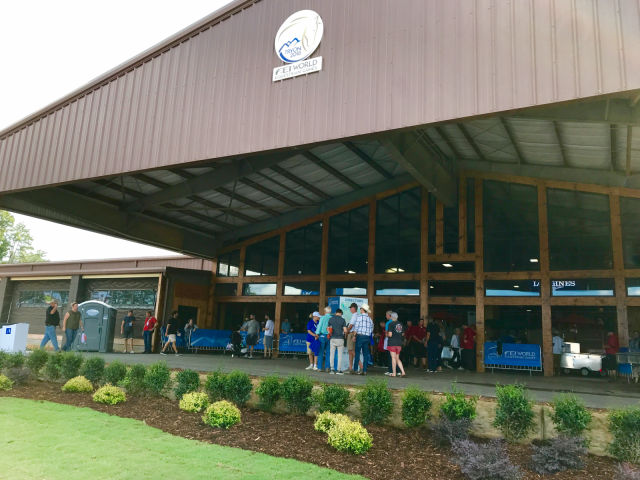 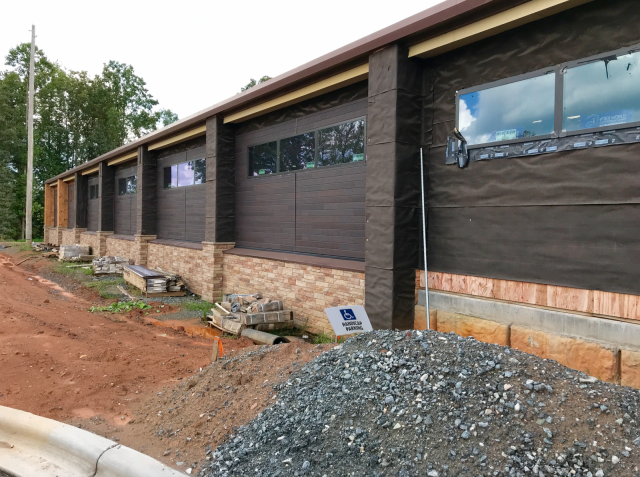 Don’t mind the dust — we’re getting ready for the … oh. Photo by Leslie Wylie.

Might as well peek our head inside. Nice and cool. Something to keep in mind if you need a place to sit down and there’s nothing going on in there. Photo by Leslie Wylie.

Next stop, this directory just before the bridge. Hungry? Thirsty? Credit card burning a hole in your pocket? Just came to watch the ponies? Whatever the order of your to-do list, this can get you started. 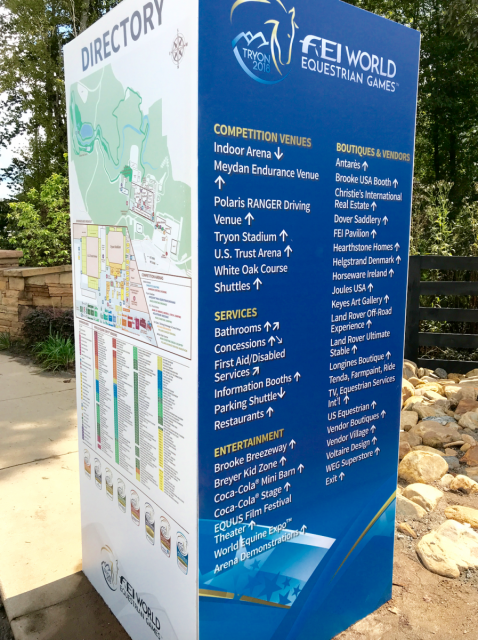 So many arrows. Photo by Leslie Wylie.

Let’s say you want to get straight to the action. A worthwhile stop-off is the Information booth by what you know as the old entrance to the venue. There, you can pick up a map or order of go and get pointed in the right direction. 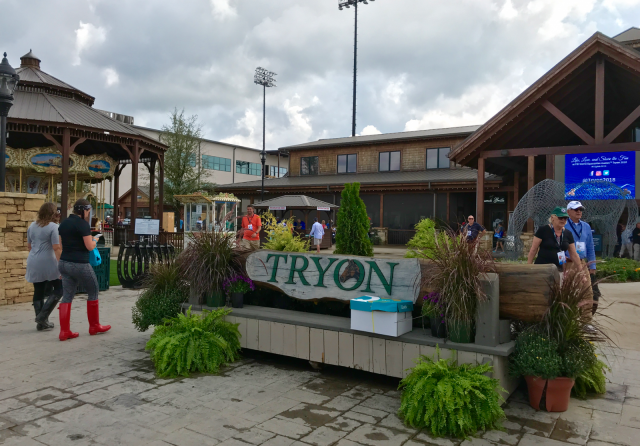 The information booth, shown in the background of this photo, is your friend. Unless there’s a very long line. Photo by Leslie Wylie.

Eventing dressage takes place in the original George Morris arena (we’re calling it Tryon Stadium this week), around back behind the Adirondack-style restaurant pavilion in the above photo. The arena is basically just as you remember it, except with a new three-story Controls Center where media is housed flanking one side of it. Para-Equestrian dressage also takes place here.

On the far side of the Controls Center, where once upon a time (about two weeks ago) there was a derby field/ghost of AEC cross country courses past, there’s the U.S. Trust Arena where straight dressage, straight show jumping and eventing show jumping will take place. 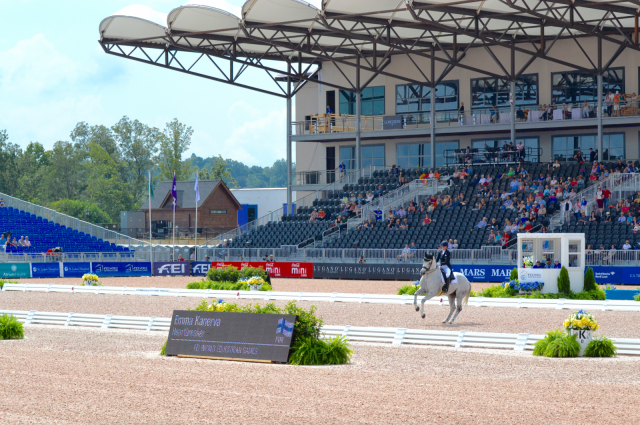 OK, now you’re hungry. There are a few permanent restaurants on-site — Campagna Italian Restaurant, Legends Grille, Blue Ginger Sushi, Roger’s Diner, Siesta Cantina — and a few snack-y places, including an new ice cream joint that wasn’t open today but hopefully will be tomorrow. But those places are going to be busy, and you didn’t come all the way to WEG to sit around waiting on a table. Good news! There’s a food truck court.

The sprawling vendor village, with food trucks at the far left. Photo by Leslie Wylie.

…. and it’s not on the map, but don’t worry, we found it for you and took notes, and that’s why we’re your favorite website. The offerings: pizza, ice cream, Peruvian fusion cuisine, farm-to-table platters, southern cuisine, Philly cheesesteaks, burgers, coffee, tapas, tacos, barbeque, sandwiches, salads, Thai steamed buns and bao, and piña coladas which IMO is its own food group. Lots of choices, and there are enough trucks that hopefully they can handle the traffic. Except for that single coffee place, which is going to get CRUSHED.

There’s a little covered pavilion where you can sit and eat in front of the Coca Cola stage, if there’s room, although here again a little folding chair would be posh if you can manage it. The food truck area is beside the kid’s Land Rover test drive area, so that could keep your little ones entertained while you nosh. 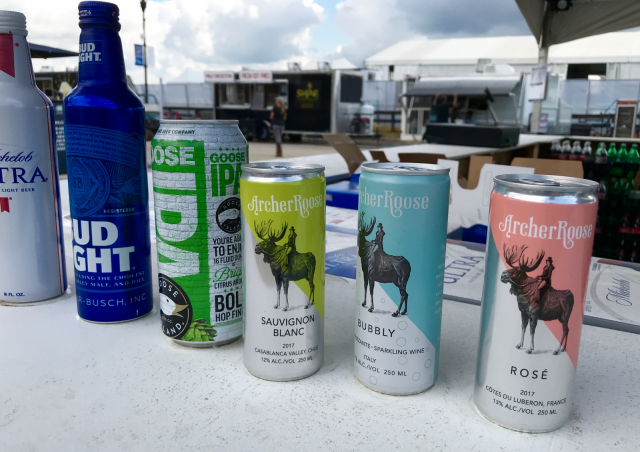 Also, THIS IS IMPORTANT, there is wine in a can. Photo by Leslie Wylie. 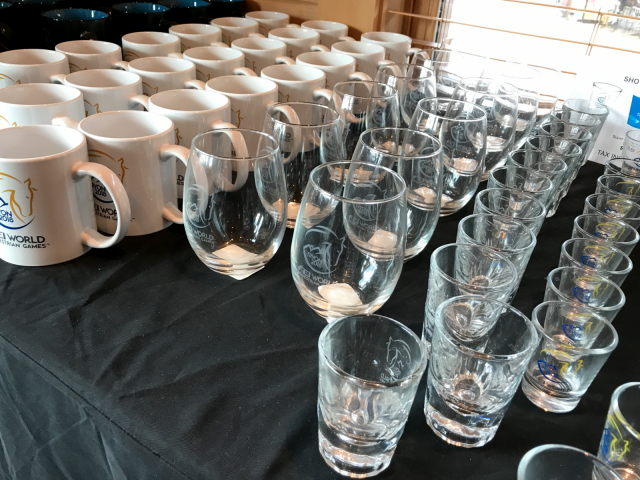 Too classy to drink wine from a can? The WEG souvenir shop, next to Tryon Stadium, has your hookup — and feel free to knock out all your Christmas shopping while you’re at it. Photo by Leslie Wylie.

Now, about that shopping, a noble quest you are now ready to embark upon now that you’re properly fed and boozed. There’s a ton of it, all the stuff you need and even more that you don’t, so don’t hold back. 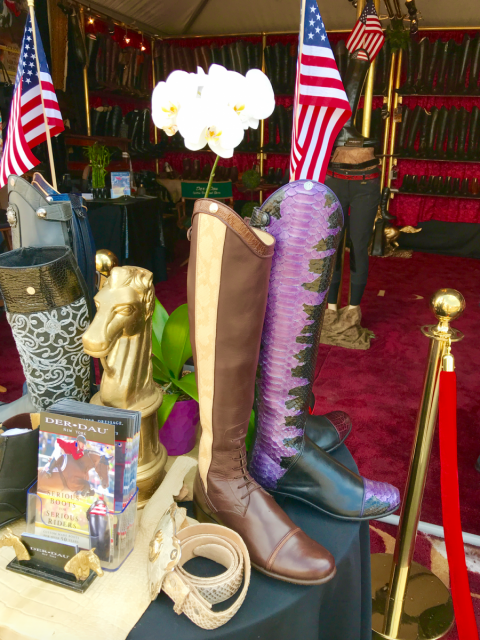 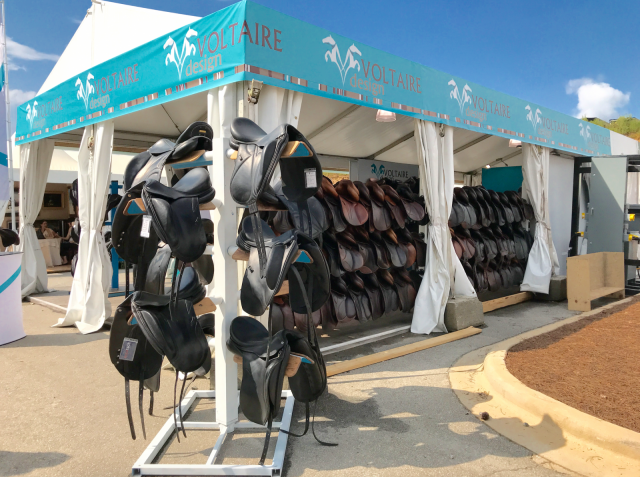 Saddles are expensive but … 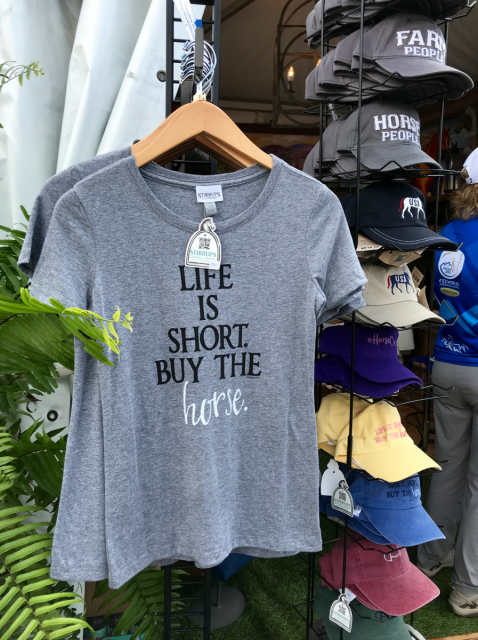 … you can’t put a price tag on terrible advice. Photo by Leslie Wylie.

Go have fun out there. Go Eventing!