Well it certainly wouldn’t be a horse show in Kentucky without an appearance from Mother Nature — or, in this case, Hurricane Ida. Though the storm has been downgraded now to a tropical depression, Kentuckians got some residual downpours from Ida as she continued to make her way across the country. Hey, at least those cross country courses will be…well-watered?

In all seriousness, though, there are thousands of people (and animals) currently displaced or otherwise affected by Hurricane Ida, particularly in New Orleans. As of this report, over 1 million residents are left without power, potentially a longterm issue, throughout Louisiana and Mississippi. One resource to use to help those affected by the storm is this list curated by Time magazine.

As for the 1000+ horses and riders competing in Kentucky at the 2021 USEA American Eventing Championships presented by Nutrena Feeds today was the start of a whole week full of highly anticipated eventing action. The Intermediate and Preliminary divisions kicked us off with their dressage tests today and will take on the cross country test tomorrow, while the Advanced, Modified and Training divisions will begin their competition tomorrow. The Novice and Beginner Novice championships will begin on Thursday.

We’re lucky to have a free live stream provided by the USEA and RNS Video Media this week and you can view the live stream and schedule here. The feed is accompanied by commentary from Dorothy Crowell and Frankie Thieriot-Stutes, and the team on site is doing all they can to show as many riders and as many divisions as possible. 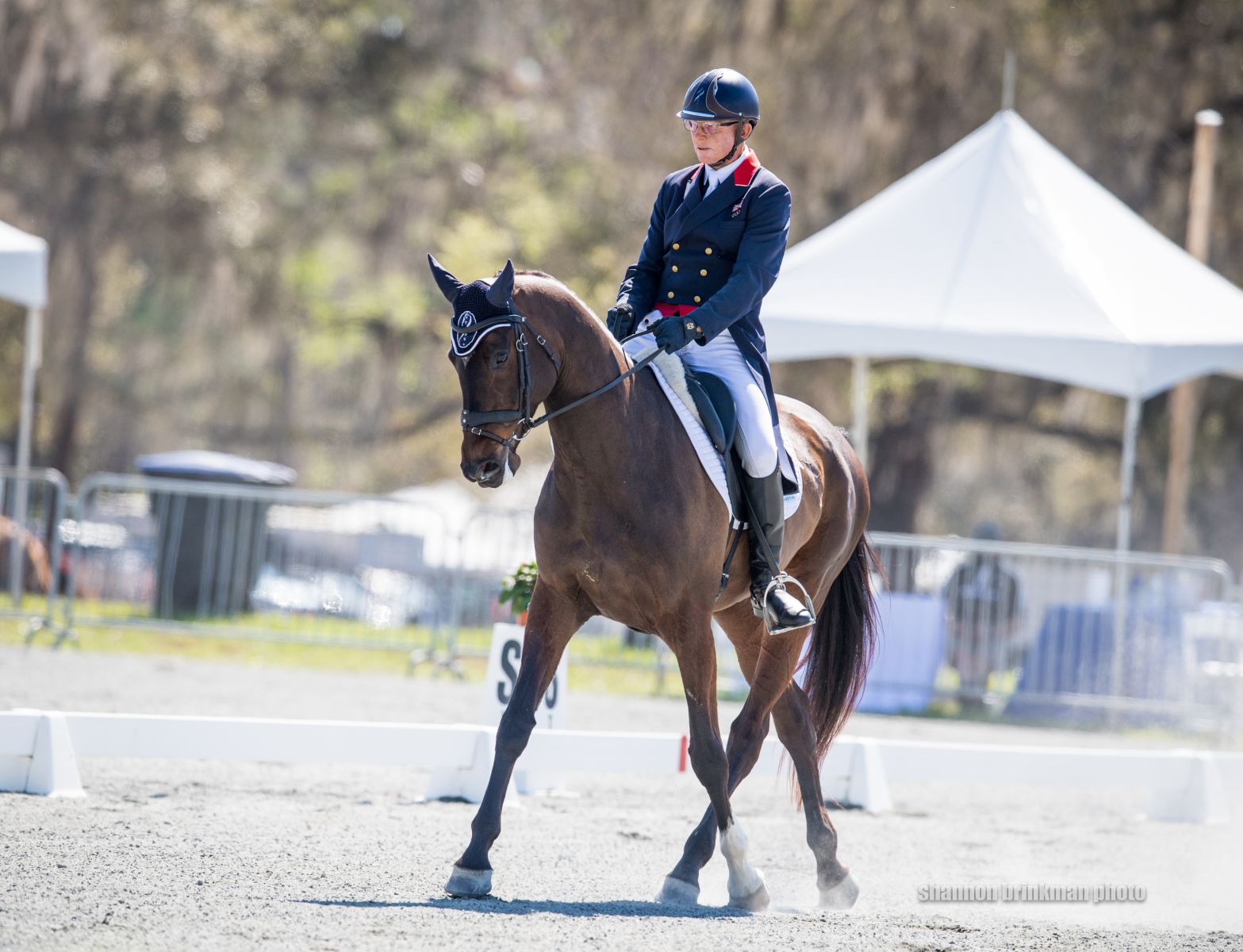 Leslie Law and Lady Chatterley (photo not from this week). Photo by Shannon Brinkman.

The USEA Intermediate Championship was the first division to see this morning, and after the dust (mud?) settled it’s Leslie Law and the 2020 Mare of the Year Lady Chatterley leading the way on a dressage mark of 25.5. Lady Chatterley (Connor 48 – Jucy, by Mytens xx) is a 10-year-old Holsteiner mare owned by Jackie and Steve Brown who wrapped up her spring campaign this year with a win in the Ocala Festival of Eventing CCI3*-L, her third long-format at the level. British Olympic gold medalist Leslie Law is one who’s well-known and respected for his tact in producing his horses, and the time he’s spent with this mare is a testament to that methodology of patience. And at just 10, why rush? This one’s a sure talent to have on the string as she continues to progress — and one to watch as she tackles the jumping phases over the next two days!

Candace Bell winds up in second in the Intermediate Championship aboard her own 11-year-old Dutch Warmblood Fernhill Philm Star (Aragorn – KVC Yasmin), who was previously campaigned in Ireland through the now three-star level by Australian rider Ben Leahy. This is the first FEI horse Candace has picked up, and they’re coming off of a top-20 finish in their CCI3*-L debut at Jersey Fresh this spring. Candace and Fernhill Philm Star will head into cross country on a score of 25.9.

Hot on the top pairs’ heels in the Intermediate will be Elisa Wallace, who brings forward Steve and Vicki Sukup’s Riot Gear (Confetti – Lucy, by Fuerst Gotthard) as well as Rick Wallace’s Munson Slew in this division. Riot Gear will be the best-placed of the pair after the first day, sitting on a score of 26.0. This pair won the Area III Intermediate Championship at Stable View in June.

Leading the way in the Bates USEA Preliminary Amateur Championship are Madison Langerak and Kelly Langerak’s Normandy Kivalo (Kalaska de Semilley – Carina, by Coral), a 9-year-old Hungarian Sport Horse gelding, on a score of 22.5. Madison is a part of the West coast continent competing here in Kentucky this week, and so far the long trip has been well worthwhile as she’s just squeaked in a hair off of her personal best score with this horse — she earned a 22.4 at Training level at Twin Rivers earlier this year. After contending with colic surgery and other setbacks over the last few years, Madison is thrilled to be back at it with her heart horse, “Norman”, and we’re just as thrilled to see their weekend set off on a high note. Kick on, Madison!

Susan Moessner and her homebred Warmblood-Clydesdale cross stallion Satin Art (Indian Art – Epic Satin, by Epic Win) will be the first-phase leaders in the Bates USEA Preliminary Rider Championship, earning a mark of 26.7 from the judges today. This is a partnership that has stood the test of time: Susan competed Satin Art in Young Event Horse competitions in 2009 and has since amassed a pages-long USEA record competing up through the Intermediate level. Believe it not, this is this pair’s first trip bay k to AEC since 2010, so it’s a very warm welcome back and best wishes to Susan as she takes on the rest of the competition this week.

First placed after dressage in the Bates USEA Junior/Young Rider Preliminary Championship are Cassie Sanger and former Caroline Martin ride Danger Mouse, a 13-year-old KWN gelding by Kannan. Cassie took the ride over in February of this year and collected their first win together earlier this month in the Preliminary at Genesee Valley. They’ll take a score of 24.7 — the best score they’ve earned since beginning their partnership — into tomorrow’s cross country.

Last but most certainly not least of day one in the Bates USEA Preliminary Horse Championship, Liz Halliday-Sharp and Ocala Horse Properties’ Shanroe Cooley (Dallas VDL – Shanroe Sapphire), a 6-year-old Irish Sport Horse gelding, will take the lead on a score of 28.5. In his 2021 Preliminary campaign, Shanroe Cooley has never finished outside of the top three, so it’s no surprise to see him top of the pack early on here in Kentucky. This is another one produced from early days by Liz, who always has a variety of young horses coming up the ranks in hopes they’ll one day turn into superstars.

We’ll continue to keep you up-to-date on the leaders from each division, and we’re pleased to partner with Shannon Brinkman Photography this week for photo galleries — stay tuned for more to come from the Bluegrass State! In the meantime, let’s take a look around social media as the eventers braved the rain today: