It’s a gloriously sunny day in beautiful Stamford, and this morning’s session of dressage saw some serious contenders complete their first-phase efforts. Whether you’re tuning in from home or watching from the grandstands, check out our comprehensive form guide to get to grips with every horse and rider combination we’ll see taking on the competition this week.

In a complete surprise to approximately nobody, world number one Oliver Townend took an early lead with MHS King Joules in the first test of the day, and the first of his three rides this week. Together, they scored 27.2 — the only sub-30 test we’ve seen so far, and a promising start to what could be a week of total domination for the rider, whose form over the past twelve months has been the best of his career. Their mark didn’t quite reach the superb lows of their personal best of 25.4, achieved here last year, as some moments of tension saw them leave a few marks on the table, but it’s an inarguably strong position for the defending champion to find himself in after the first session. 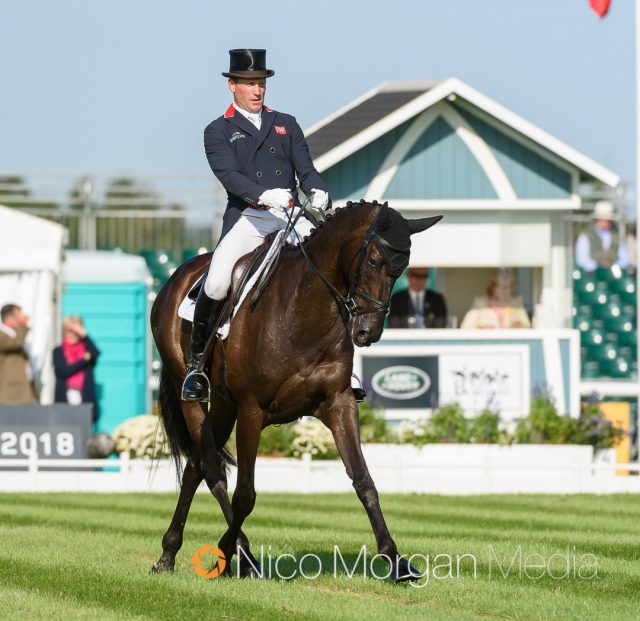 “I’m happy enough with him — if he stays on that mark, I’ll be very happy,” said Oliver, who has previously rued his proclivity for a number-one draw. “It’s always difficult being the first in, but with three horses entered it was inevitable, really.”

Oliver and ‘Jay’ come to Burghley on a high after finishing seventh at Kentucky in the spring. There, they added just a rail to their dressage score of 31.3, giving them the best finish of the horse’s career.

“Kentucky was a real confidence boost for me and him, and he’s been feeling good since then, so hopefully it will continue. This is as big a Burghley as I’ve seen in terms of dimension, with three serious hills, and it’ll be very stamina-sapping — there are none of the twenty second breathers we’re used to here, like the pull down Winners’ Avenue. It’s going to be very, very tough on the horses.”

Oliver had five horses entered in this week’s competition, but brings forward three: Jay is joined by last year’s winner Ballaghmor Class and Badminton runner-up Cooley SRS. He admits that the decision was not an easy one to make.

“It’s a testament to the team at home to have five horses fit, sound, healthy, and ready to run around Burghley. It made it a very tough choice — but a nice one to have.” 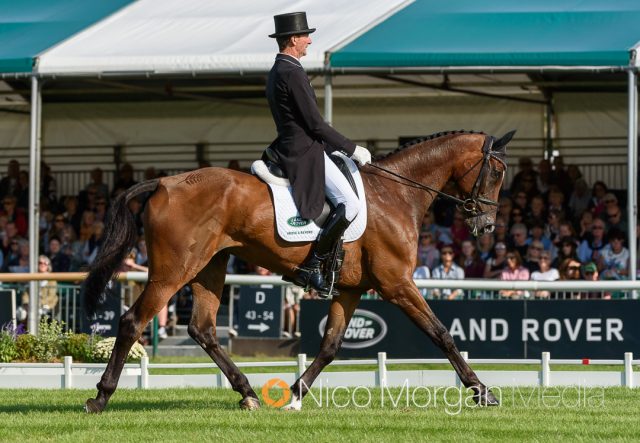 Squeezing into second place on a score of 30.8 was New Zealand’s Mark Todd. Riding NZB Campino, he produced the good score despite two errors of course, in which he forgot the 20m circle and then halted in the wrong place.

“It’s too early in the morning,” he sighed with a rueful grin. “I’m putting it down to onsetting dementia! It’s bloody annoying, to say the least, especially when you consider how tight the scores are with the way the sport works now. I sort of let the horse down a bit.”

The sat-nav failure comes hot on the heels of Mark’s late arrival at yesterday’s trot-up — fellow Kiwi Tim Price presented NZB Campino for him, though he appeared in time to take the reins of Kiltubrid Rhapsody. We’re not sure who’s in charge of making Mark’s coffee this week, but we’d like to offer the services of Chinch, who is well-practiced in the art of heavy caffeination. 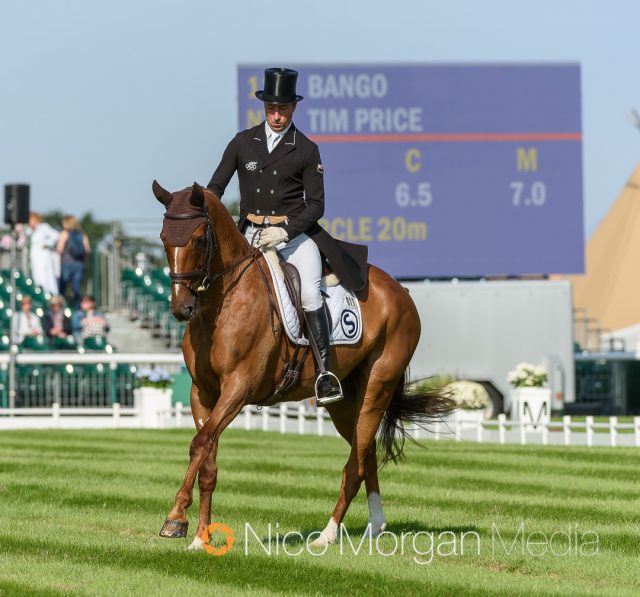 Tim Price and Bango ride through a tricky condition to tie for third at the lunch break. Photo by Nico Morgan Media.

Tim Price capitalised on the good karma he earned yesterday, producing a score of 32.1 to sit equal third with Bango, the first of his two rides this week. Bango, who is making his return to top-level competition after two years out, isn’t always the easiest horse in this phase — he suffers from idiopathic headshaking, which can lie dormant for months and then reappear, seemingly without any trigger.

“He’s always been a bit of a headshaker. It started when he was five or six, and it tends to come out of nowhere. Sometimes I get away with it. I didn’t quite today,” said Tim. “But he’s happy, and I’m happy, and we’re looking forward to the next bit. He’s fast, and that should stand him in good stead this week. He’s super fit at the moment, and some of the filtered through today and led to a couple of blips, but he’s not an out-and-out dressage horse and we don’t expect him to lead this phase.”

For the first time in a long time, Tim finds himself competing in a four-star without having to ride against wife Jonelle, who won Badminton and Luhmühlen earlier this season. Instead, she’s here to help from the ground – “begrudgingly,” laughed Tim. “Though I’m not sure which capacity I prefer her in!” 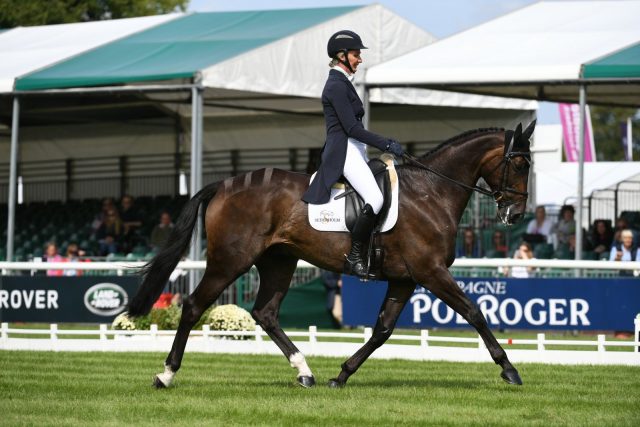 Tying with Tim for third place is British rider Julie Tew, who rides Simply Sox in their Burghley debut. Julie, who has had a long and storied career at this level, hasn’t avoided Burghley intentionally — it’s just never quite happened for her.

“It’s crazy, isn’t it — I think I’ve been to just about every single event, bar Burghley!” she laughed. “Though I did do the young event horse class once — does that count?”

For Julie, making it to Burghley is an inordinately special moment. Both she and her horse have overcome incredible hurdles to make it to this point — Julie was diagnosed with a spinal tumour 18 years ago, and though it was removed, she was told she’d never ride again, and that walking with a stick would be the pinnacle of her physical prowess going forward. Nevertheless, she ‘fought immensely’ to get herself back in the saddle and competing at the top level of the sport.

“For the past five years, it’s been incredibly painful,” she explained. “I have 90% nerve damage in my legs, so I can’t do any fitness work — in fact, the less I do, the better I feel. So it’s a real balancing act. I can’t tell you — I’m so emotional for being here.”

Simply Sox, too, has had his fair share of setbacks, suffering numerous nearly career-ending injuries.

“He’s quite a tricky horse to manage, and has had some really stupid injuries. He tore a ligament tripping on the walker, and he goes mad when he’s turned out, which has caused him some problems. But he’s very bold, brave and very honest, so, touch wood, Burghley should be great for him. It’s immense to actually get here.”

Their score of 32.1 propelled them up the leaderboard, but their changes let them down: “normally I can get more leg on him, but I couldn’t today, which was a shame as he’s normally so good at the changes.” 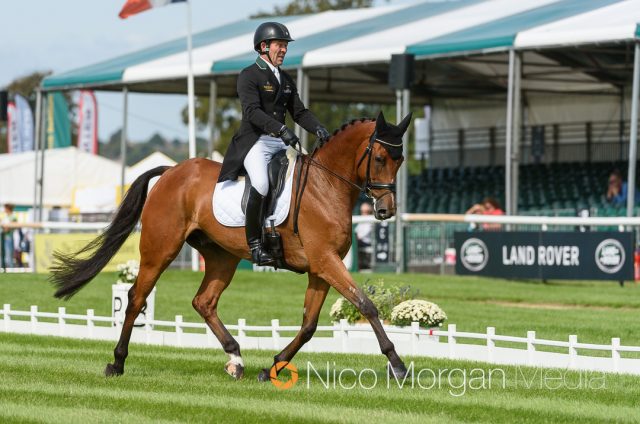 Austin O’Connor and Lucky Contender impress in the horse’s introduction to a big atmosphere. Photo by Nico Morgan Media.

Ireland’s Austin O’Connor was another rider to suffer a navigational mishap toward the end of his test, but he and four-star first-timer Lucky Contender nevertheless pulled out a respectable mark of 32.4 to sit fifth at the end of the morning’s session.

“I’m not used to these tests going so well, so I think I was enjoying myself a bit too much, and my brain wandered,” laughed Austin. “I’m delighted with him, though — he’s such a trier, and even when things go wrong, it’s because he’s tried too hard, not because he’s behaving badly in any way.”

Austin found the horse as a three-year-old and spotted something special, but Lucky Contender has really only come into his own this season, with three top-ten finishes at three-star level.

“He has a very patient owner in Wendy Foster. What I saw in that three-year-old took six years to show to everyone else. He’s quite a sensitive person — half his downfall is wanting to please too much. He’s also a typical Irish horse and has taken a long time to mature. But he was exciting as a youngster — mostly because he didn’t cost an arm and a leg!”

Despite his promising early position, Austin is pragmatic about his plans for the week: “he’s a ten-year-old, and I’m going to ride him accordingly. It’s a big step in his education.” 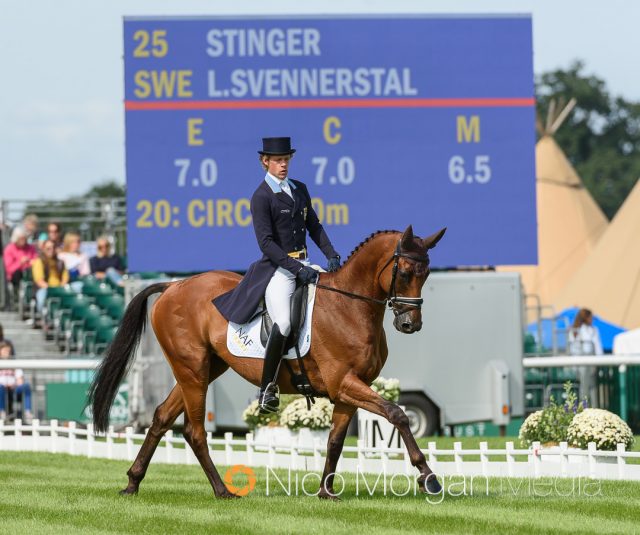 Sixth place is held at the lunch break by Sweden’s Ludwig Svennerstal, whose young talent Stinger produced a 33.1 to get his week off to a good start.

“I think it was okay,” said Ludwig of his test. “It’s the horse’s first time at this level, and he needs to be a bit more established, so we had some small mistakes but I’m pleased with him. Dressage isn’t his strongest phase — those are the two upcoming ones, so we’ll see what he can do with those.”

Stinger began his career as a show jumper, competing internationally over 1.30m tracks, but Ludwig sought to keep the ride after catch-riding him around Falsterbo’s Eventers’ Grand Prix class. The horse then climbed from Novice [Preliminary] level to three-star in just eleven months, and was recently selected as one of Ludwig’s options for the forthcoming World Equestrian Games.

“This is for sure my favourite show, and I can’t wait for Saturday. His real quality is his cross country — he’s a very straight, good horse, and he’s well prepared after jumping well at Aachen and Gatcombe.”

Two new faces snuck into the top ten this morning — Hector Payne, whose family have been long-term owners for William Fox-Pitt, rode Dynasty to a 33.2 and seventh place. Dynasty was campaigned by Fox-Pitt until his accident at the tail end of 2015, when the ride went to stable jockey Hector. This is their Burghley debut: “it’s very different to come here as a rider — we were lucky enough to come as owners six years in a row,” he explained. “Though I did do the Pony Club showjumping here, an embarrassing number of years ago! It’s great to be here for the real thing.”

France’s Camille Lejeune and Tahina des Isles posted a 33.9 to sit just below Andrew Nicholson and Jet Set IV — “a beautiful horse to sit on” — in ninth place. Some tension saw their marks slip in the final movements of the test, but for Camille, just being here is special enough.

“It’s like the dream of a kid,” he smiled. “I was watching the videos of Burghley when I was eight, nine, watching Mark Todd and Andrew Nicholson. I’ve never even been here as a spectator, so to be here, in the end, is very cool.”

The afternoon’s dressage session commences at 2.00pm BST/9.00am EST, and you can follow along with the event’s live stream, available here. Piggy French and Vanir Kamira (2.08pm BST/9.08am EST) are the most likely contenders to take over the top spot, but don’t miss Sarah Bullimore and Reve du Rouet (2.48pm BST/9.48am EST), who could be one of the real dark horses in this phase. We’ve got one US rider between the boards today — Andrea Baxter and Indy 500 will do their test at 4.15pm BST/11.15am EST.

The top ten at the lunch break on day one of dressage.