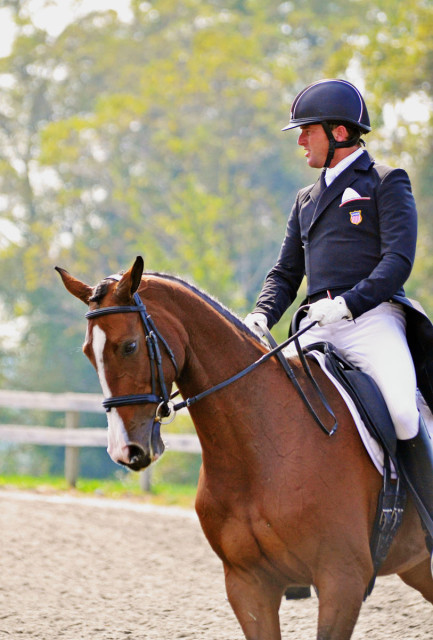 We’ve just wrapped up the first half of the monster CIC2* division here at Plantation Field Horse Trials, and Marilyn Little and RF Scandalous lead the way on a score of 42.4. Recently imported from Germany, the 9-year-old Oldenburg mare is a seriously impressive mover, and Marilyn was able to work with the USEF to transfer the mare’s qualification in order to compete in the CIC2* this weekend, with the ultimate goal being the Dutta Corp Fair Hill International CCI2* next month. Marilyn talks all about the mare in this profile we ran last month.

Will Faudree and Caeleste are sitting in second place in the CIC2* on 43.0. A 7-year-old German Sport Horse mare produced in England by Kitty King, Will found out about “Mouse” when Clark and Jess Montgomery told him they thought he would really like the mare. He flew over to England the next day, rode and vetted her the following day, and his longtime owner and supporter Jennifer Mosing generously agreed to buy her the day after.

“I love mares, and she’s a little pocket rocket,” Will said. “She’s little and fiery and opinionated but in such a great way, and she knows when to go to work and is very happy to go to work.” She stepped up to Intermediate at Fair Hill in August, as Will said she was extremely well schooled coming from Kitty, and he’s been thrilled with the progress she’s made since coming into his program.

“John Zopatti has been based at my farm this summer up from Florida, and I’ve had him helping me in dressage,” Will said. “She’s made huge progress from when we first started with her back in May, especially just on balance. I was very happy with her test today, as it was an improvement from Chatt Hills.”

Phillip Dutton and Atlas round out the top three in the early going on a score of 45.0. “It’s been a little bit of a quick turn around to get back into the saddle with Atlas because I just got back on Monday night from Blenheim,” Phillip said. “Kaitlin Spurlock and Waylon Roberts have done a great job keeping him in work while I’ve been away, and I thought he did a nice test.” Poor Phillip has been battling a cold for the last week, so we’re sending him all the EN karma to get well soon.

In the Open Intermediate, Matt Flynn leads the way with Baronto on a score of 30.8. This horse is one of Lindsey Taylor’s charges in her new role with Flynn Sport Horses, and she said today it’s been a nice change of pace to be looking after just two horses this weekend as opposed to Boyd Martin’s menagerie. The horse put his head down and went right to work, and he’s going to be a cool one to watch for the future.

Lauren Kieffer continued her good day with Meadowbrook’s Scarlett, scoring 31.3 to sit in second place in Open Intermediate, followed by Michelle Warro and Not Without Me, sitting in third place on 32.1. “Banks” is an off-track Thoroughbred with a great rags to riches story, which we ran on Horse Nation earlier this summer. It’s definitely worth a read, so click here to learn more about Michelle and Banks — and check out the redesign while you’re at it!

We already recapped the small but mighty Advanced division earlier today, so click here to read the full report. Lauren Kieffer and Veronica are sitting in first on a score of 31.8, followed by Jennie Brannigan and Cambalda in second on 32.4. Katy Groesbeck and Oz the Tin Man and Buck Davidson and Mar de Amor tied for third place on 33.2. Lauren and Jennie were kind enough to swing by the press tent for a chat at the end of the day, so click below to hear their thoughts on their tests.