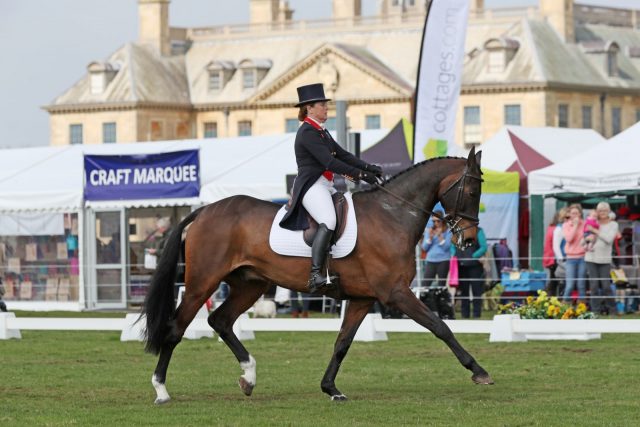 Pippa Funnell and Billy Beware storm into a decisive lead in the Grantham Cup CIC3*. Photo by 1st Class Images.

“Pippa Funnell – that’s who writes the books I like!” said a small voice alongside the Grantham Cup arena. “I didn’t know she was a rider, too,” the voice mused.

If there was ever any doubt – and really, was there? – the first Grand Slam winner (and, yes, author of rather a lot of pony novels) thoroughly dispelled it in the first phase of Belton International’s Grantham Cup CIC3*. She led overnight on MGH Grafton Street, sitting just a tenth of a penalty ahead of Ireland’s Jonty Evans and Cooley Rorkes Drift, but today she pushed for a safer buffer.

Badminton-entered Billy Beware posted an incredible personal best of 21.7 at Burnham Market last month, proving that, despite a lengthy leave of absence, he was still a force to be reckoned with. The competition’s subsequent abandonment meant that we never got a chance to see whether he could defend his position – but rather than playing a difficult game of ‘what if’, Pippa opted to make her own luck and repeat her fortunes of the last outing.

This time, she left nothing to chance, carving out a 2.5 penalty margin between first and second place with her score of 24.9. When you consider that only a rail separates second place from 22nd place, this decisive lead becomes all the more impressive. The event is far from won – Pippa and Billy Beware will have to leave all the poles up and set a competitive pace from the off to hold their lead – but if anyone had overlooked Billy Beware for his lack of match practice, they’re all sitting up and taking notice now. And this is a weekend on which making an impression is important: the powers that be, on whose educated opinion this autumn’s teams will be formed, were out in force, watching, coaching, and advising. 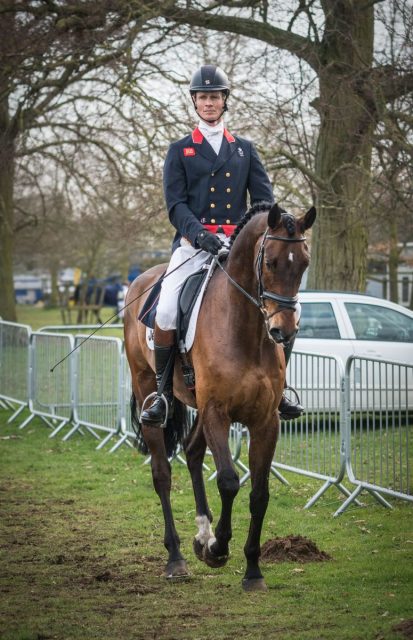 William Fox-Pitt and Little Fire warm up for their CIC3* test. Photo by Tilly Berendt.

They had plenty to smile about, with stalwart team members producing exciting early results across the board.

William Fox-Pitt contained and channelled Little Fire’s exuberance, transforming some expressive moments in the collecting ring into a mature, impressive test. The nine-year-old posted a 27.4, putting him into second place overnight in only the horse’s third three-star. 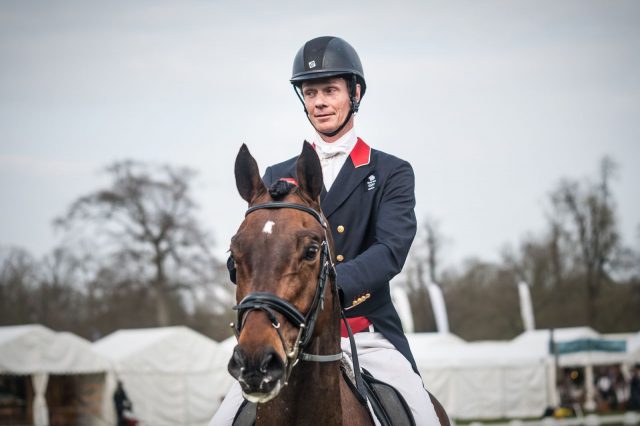 You know when you’ve managed to get the job done in fine style but your horse is still wearing his party hat? Yeah, that. Photo by Tilly Berendt.

Pippa Funnell‘s leading test yesterday aboard MGH Grafton Street held on to third place after the end of the phase today, while Francis Whittington and Hasty Imp (28.5) and Izzy Taylor and Springpower (28.7) claimed fourth and fifth places, respectively. Springpower is a relatively new ride for Taylor – she took the horse on in the middle of last season, piloting him to fourth place in a CIC2* section at Somerford Park and then seventh in his first CIC3*, the 8/9yo class at Blenheim. In seven international runs, he’s never had a cross country fault, nor has he ever added more than 10.8 time penalties, so lack of early season prep notwithstanding, this pair should be very competitive tomorrow. 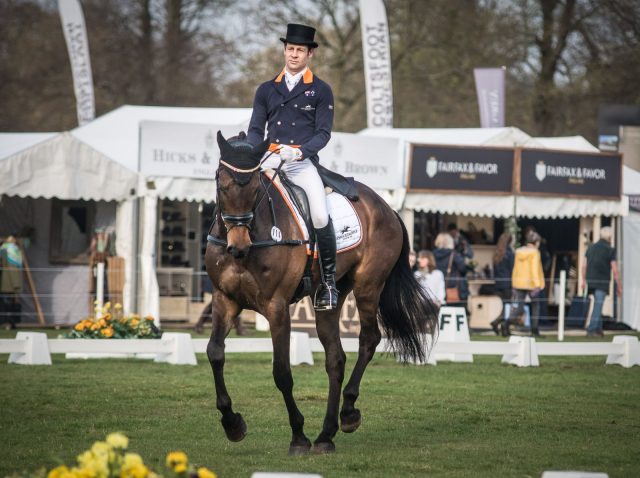 Quality Purdey, ridden by Australia’s Chris Burton, posted a 28.8 to join Cooley Rorkes Drift and Jonty Evans in equal sixth place. The Oldenburg mare, owned by Claire and Dom Poole, came to Burton’s yard in 2017 after a year out. In their two international runs since, the pair have posted a win – in the CICO3* at Le Pin au Haras, where they finished on their dressage score, and 22nd at Boekelo CCIO3*, where a technical 20 penalties cost them the win. Burton is lightning fast when he chooses to be – he’s not colloquially referred to as the fastest rider in the world for nothing – and this talented mare has proven she’s capable. She’s also one of only a handful of horses in the field to have managed more than one run so far this season – she’s completed two Open Intermediates, which means that we could see Burton use the accelerator tomorrow. With the removal of the dressage multiplier, a horse who can finish on, or close, to their dressage score will climb exponentially – and sixth place is not a lengthy climb from the top.

The rest of the top ten was unscathed by today’s competitors, but several notable names entered the top 20, just the smallest of margins away from a spot in the upper echelons. Kiwi Andrew Nicholson brought forth his Le Lion d’Angers mount Yacabo BK, who scored 29.4 for 11th place. This is the 8-year-old’s first CIC3*, and in his five previous internationals he has only finished outside of the top 10 once. Nicholson has shaped the latter part of his career around horses bred by Spaniards Ramon and Ana Beca, and Yacabo is no exception – if he can follow in the footsteps of forebears Quimbo, Armada, and Nereo, then he’ll be an exciting horse for the future. 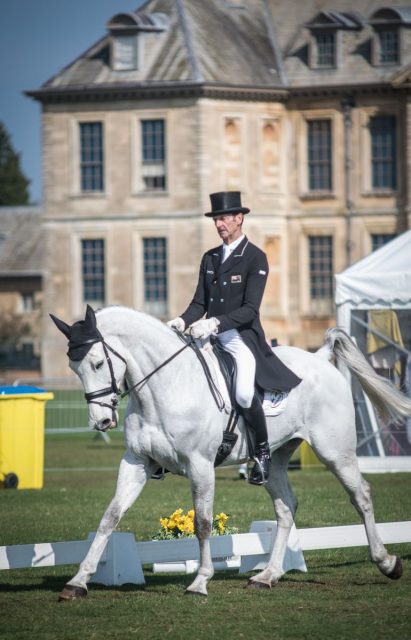 Fellow countryman Mark Todd squeezed two into the top 20, as well: the exciting 11-year-old McClaren, seventh at Boekelo CCIO3* and Blair CIC3* last year, and Badminton entrant Kiltubrid Rhapsody, who has finished in the top 10 in four of six three-stars. 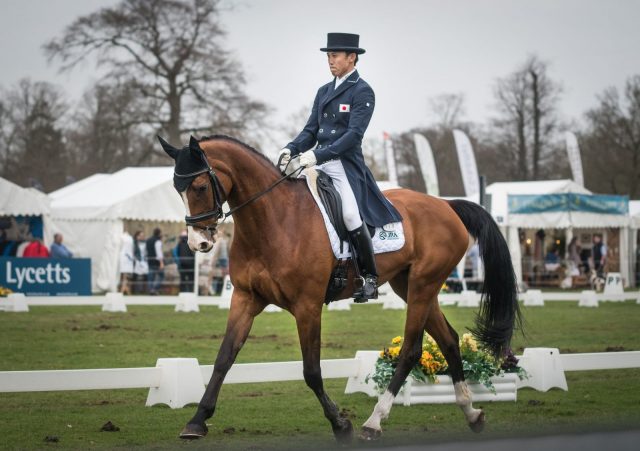 Japanese rider Kazuma Tomoto sits in 18th place overnight with Bernadette Utopia, a 12-year-old mare produced to three-star by Padraig McCarthy. With a clear cross country rate of over 90%, she’s incredibly consistent and, since making his mark on the UK scene under William Fox-Pitt‘s tutelage, Tomoto has proven his ability in the irons, too. Two time penalties across the country lost him the 8/9yo CIC3* at Blenheim by a tenth of a penalty last year aboard Brookpark Vikenti: he’s due a win, but whether this will be the horse or competition to give it to him remains to be seen.

Belton is hosting two CIC3* sections this weekend: the Grantham Cup, which features some of the top horses in the country, and which Pippa Funnell is leading, and a second section, for horses with fewer FEI points. The overnight leader here is a familiar face, albeit one we haven’t seen in a very long time.

“He’s a good friend – and now, he’s like my old schoolmaster,” says William Fox-Pitt fondly of 15-year-old Bay My Hero, back with a bang after a hiatus that has lasted since the European Championships in 2015. It wasn’t injury that saw ‘Mooney’ disappear from the competitive scene, but rather a temporary stepping back of owner Catherine Witt. Now back on the scene, he’ll be targeted at the Event Rider Masters CIC3* series, at which he can run, as William says, for fun and without the pressure of the major CCIs or team competitions. Despite a lack of match practice in recent years – nor a particularly active spring – he’s proven to be a serious competitor in challenging circumstances before. In 2014, he won the Kentucky CCI4*, his first international run in 18 months to the day. A similarly leisurely win here could set him up as a serious contender in the big-money, highly competitive ERM series.

Tomorrow it all comes to a head in both CIC3* sections, with showjumping beginning bright and early in the morning and cross country following shortly thereafter. We’ll be bringing it all straight to you as it happens across our social media channels, with a full report at the end of the day and all the inside scoop from the top of the leaderboard and our Badminton-bound entrants.

Until next time – go eventing! 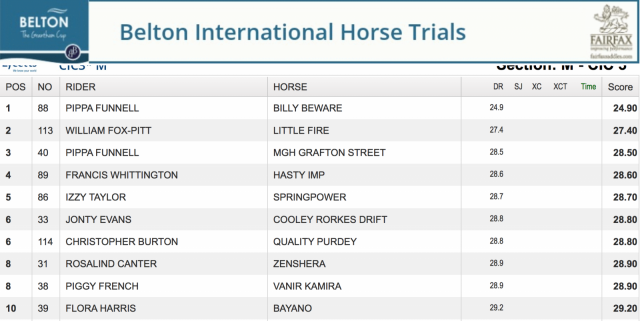