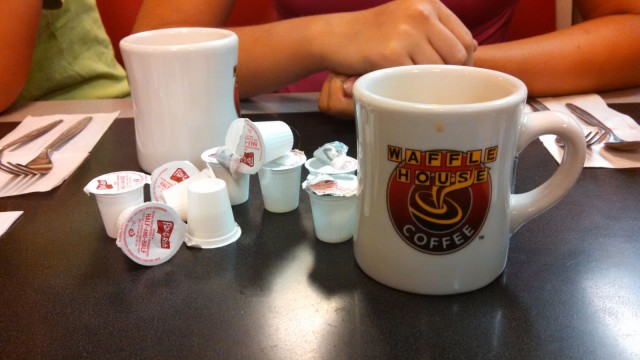 It’s only been the first full day of Pony Club Championships–the eventers have finished dressage–and already I’m thinking this is going to kill me.

I’ve got my mare Sarah here with me, and her layover stall is in the Tetrathlon barn. Both yesterday and today I stretched out across my tack trunk and a bale of hay, my head cushioned on a dirty saddle pad, and slept. Slept like the dead. If funky photos of me turn up on the internet, blame the Tetrathlon kids.

One of the Tetrathlon kids was acting too tired to tack up today. I threatened to put his photo on Eventing Nation. It’s wonderful having this kind of power.

By afternoon, the Tetrathlon kids were in an uproar over some aspect or aspects of the horse management judging. Three girls were discussing the judge’s perfidy in loud voices while stabbing at the floor with their brooms. Stab, stab. The sole male member of their team came back from hand walking his horse. “Take another lap,” one of the girls snapped at him. “We’re having Angry Sweeping and Rant Time.” He took another lap.

My daughter’s team wasn’t mad at the horse management judges. They were mad at the dressage judges. They’re eventers, after all. When I was allowed to check on them, mid-afternoon, they were composing a song reflecting their hatred of dressage.

Seriously? I’m here until next Monday? Provided, of course, that I live that long.