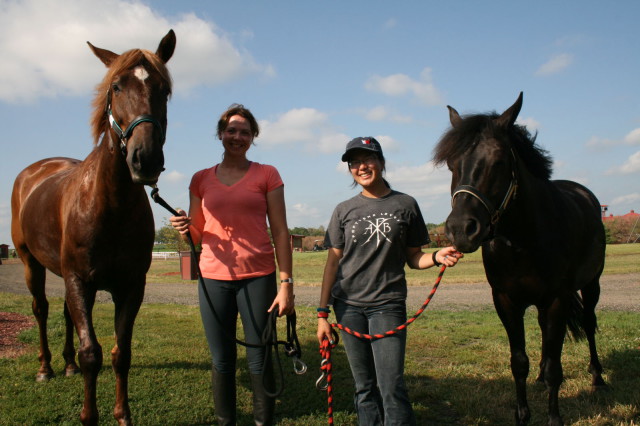 Ingvill Ramberg, left, brought her friend Lindsey Kahn to Roebke’s Run for Kahn’s first try at Eventing. They are pictured with their horses, Johnny’s Private Collection and Onyx.

Ingvill Ramberg and Lindsey Kahn are close friends and riding buddies. Ramberg has been eventing for a number of years, Kahn is just starting out.

Kahn, 27, from Oakdale, Minnesota was visibly excited about her maiden run at Eventing. She and her 7-year-old Morgan gelding, Kells Accent On Xcellence, better known as Onyx were at Roebke’s Run in Hector, Minnesota for her very first Eventing competition. She takes lessons from Ramberg and boards her horse at Ramberg’s Hugo, Minnesota stables.

Kahn has been riding for a number of years and owned Onyx since he was two years old. “I competed in a lot of Hunter-Jumper shows down in Kentucky when Onyx was three and four years old. When I came back to Minnesota I started riding with Ingvill and Kim Hiller, who is the trainer at Woodloch Stable,” said Kahn. “This is my first horse trial, I’m so excited. I’ve never competed in cross-country. I haven’t seen the course yet, we just got through setting up our tent.”

“A tremendous amount of work has gone into this place,” said Ramberg, who originally is from Norway. “This is my third time here. It’s really nice, the Schweiss family are super friendly and try to accommodate you the best way they can. They even served us our food in front of us on plates.” 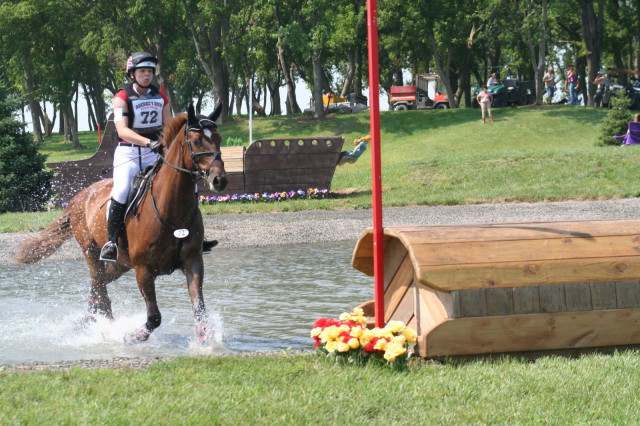 Ingvill Ramberg navigates the pond on the Cross-Country course at Roebke’s Run with her horse Johnny’s Private Collection. She competed in the Novice Horse division.

Lindsey started taking lessons from Dan Ramberg at Woodloch when she was a little girl. Dan is a legendary horseman, who won “Horseman of the Year” he is Ingvill’s father-in-law and one of three generations of Rambergs living on the180-acre site at Woodloch Stable which he founded over 25 years ago. Many of his students have gone off in many directions said Ingvill.

“I was just crazy about horses and wanted to take lessons. When I was younger, I mainly just wanted to ride. I did a lot of trail and western competitions but never got seriously into showing. As I got old I got more serious about it and saved up my money and bought a truck and trailer so I was mobile. My first horse was good about working in an arena and building my confidence,” said Kahn. “It was actually when I bought Onyx, a horse that was pretty athletic and who has a good brain that I got serious.

Competing in the Beginner Novice Rider-B division, Kahn said she had a blast and gained valuable experience from watching the CIC* and CIC** riders at the Roebke’s Run Horse Trials despite the fact that Onyx didn’t care much for the challenging cross-country run on Sunday.

Words on the Woodloch Stable website define riding as the art of keeping a horse between you and the ground. Eventers will highly agree with that, but they will be the first to tell you there’s a little more to riding than that. Effective communication is key to good riding and the way you communicate with your horse defines you as a rider.

So how did Lindsey and Onyx fair on their first Beginner Novice cross-country run? Well, let’s just say Onyx wasn’t exactly in the mood for it. But they’ll be back. “Goals for future? Right now I’m just getting my feet wet. We’ll have to see,” said Kahn.