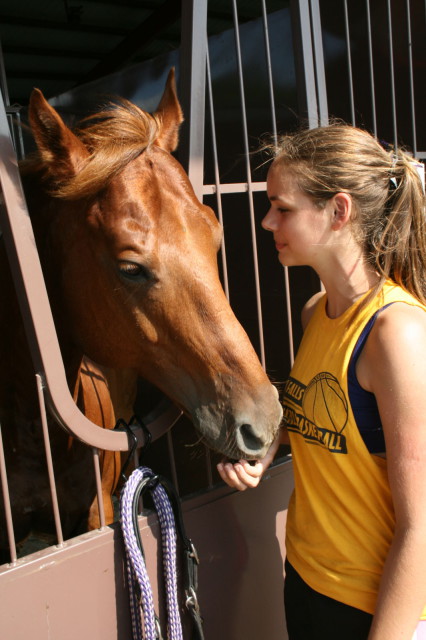 Meg Wilkening of River Falls, Wisconsin arrived at Roebke’s Run Friday to prepare for the next two days of horse trials in the Starter Division. Here she gives “Better Than A Boyfriend” some encouraging words.

Meg Wilkening is a 14-year-old eventer, and says on a good day she can compete with the best. Wilkening came to Roebke’s Run with her mother, Mary, to compete in the Starter Division level.

Arriving on Friday afternoon before the next days competition she was seen whispering sweet nothings, encouragements and sharing a few light kisses on her horses forehead, aptly show-named by her father as “Better Than A Boyfriend.” Wilkening prefers to call the 12-year-old Paint Breeding Stock horse by the name of Kingsley.

Pre-event preparation for eventing is something every rider has to do; for Wilkening it includes memorizing dressage tests, packing, bathing Kingsley, cleaning tack and a number of other things. 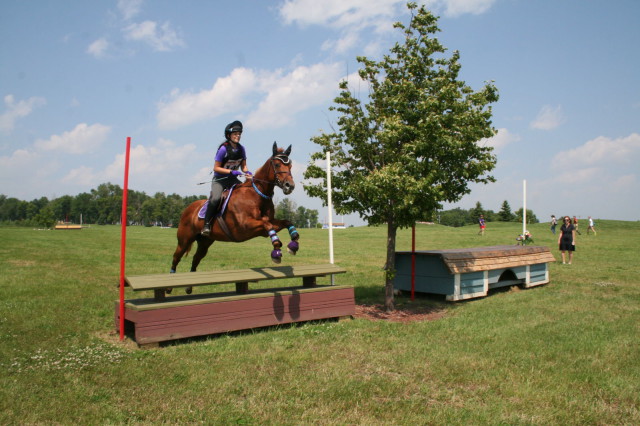 Wilkening and Better Than A Boyfriend easily cleared this cross-country jump Sunday. She has been Eventing for the past two years.

Coming from River Falls, Wisconsin, Wilkening made the 3-hour trip to Roebke’s Run for her second time, having been here at the October 2013 Horse Trials. She is not new to the sport; having been jumping and doing schooling shows since age 10 and competing in recognized shows for the past two years, mostly in the Wisconsin, Minnesota area.

“I have always loved horses and liked jumping. I always thought Eventing and competing would be fun,” said Wilkening. “My strength lies in Stadium Jumping. Cross-Country is fun when it’s going well, but Stadium goes better more often.”

Temperatures for the Saturday event were mild, with a brief rain, but not enough to put a hold on anything. Sunday, for cross-county was sunny and absolutely perfect. “(Kingsley) competes better in cooler weather, on hotter days he’s a little slower,” said Wilkening.

On this weekend, Wilkening and Better Than A Boyfriend finished in the top six of her Starter division. Looking to the future, Wilkening said she definitely would like to do a Novice with Kingsley before she goes to college in a few years. She complimented Roebke’s Run for being a well run event overall with the course being difficult but fun. And she added that the food is good.