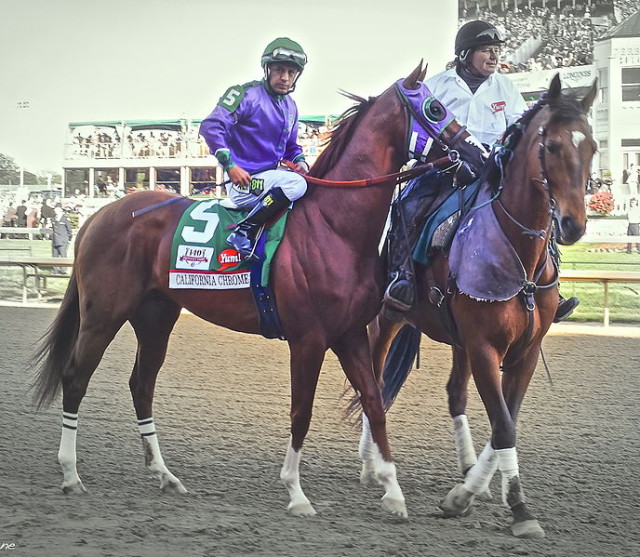 FLAIR Nasal Strips have become a household name following California Chrome’s victory in Saturday’s Preakness Stakes. New York Racing Association rules do not allow Thoroughbreds to wear the strips in races in the state, which hosts the Belmont Stakes, the third and final jewel of the Triple Crown.

Chrome’s trainer Art Sherman filed an official request with NYRA stewards yesterday afternoon to use the strips in the Belmont, according to the Daily Racing Form. A decision is expected to be made by tomorrow, though rumblings on Twitter say a decision could be made as early as this morning.

FLAIR posted a statement on its website saying company officials are working diligently on the issue: “We will continue to do everything in our power to work with The New York Racing Association to get the strips approved for New York Thoroughbred racing as quickly as possible.”

FLAIR strips are nothing new to eventers, as they’re commonly used on cross country to help improve airflow and promote respiratory health during strenuous activities. They’re equally helpful to racehorses, and Chrome has worn a FLAIR strip in each of his last six races, all of which he’s won.

NYRA stewards faced this same issue in 2012 when I’ll Have Another was set to run in the Belmont Stakes, the New York Times reports. The stewards ultimately ruled the horse could not wear his FLAIR strip, though it was ultimately a moot point, as the horse scratched from the race the day before with a leg injury.

Art has already said he will consider not running Chrome in the Belmont if stewards make the same decision this time around, CNN reported, so now racing fans are left waiting for the ruling with bated breath. Stay tuned to EN for more on the FLAIR strip controversy.

Update 11:30 a.m. EST: The Jockey Club, NYRA and New York State Gaming Commission have released a joint statement on the decision to allow Chrome to wear his FLAIR strip. The stewards made their decision based on the advice of Scott E. Palmer, VDM, the equine medical director for the gaming commission:

“I recommend that the stewards at State-based Thoroughbred racetracks discontinue their ban on equine nasal strips. Equine nasal strips do not enhance equine performance nor do they pose a risk to equine health or safety and as such do not need to be regulated.