Ever fantasized about dropping everything to focus on your riding? Area V eventer and Tales from a Bad Eventer blogger Laura Szeremi’s dream was to go be a working student for a big-name rider –– just one (OK, more than one) problem: her job, her husband, her farm, her can’t-even-keep-count-of-how-many herd of horses… and, well, Laura is a bit older than your typical starry-eyed working student candidate.

In light of all that grown-up “baggage,” what she chose to do next — load up the trailer and move from Texas to Florida to be a working student for Jon Holling — makes her the hero of every adult-amateur event rider’s wildest dream. This is her story.

Just tuning in? Part 3 chronicles Laura’s #YOLO decision to make her fantasy a reality, and Part 2 outlines a few newbie lessons she learned the hard way. Today’s entry, penned one week into her experience, doesn’t gloss over the fact that it’s hard work, yet somehow worthwhile.

All photos courtesy of Laura.

If you’ve never experienced a clinical rotation in some kind of medically related college it’s hard to explain to the uninitiated the complete circle of hell that is involved.

My clinical rotations in vet school are a blur of sleep deprivation, massive stressors and intense starvation. I’ve never been so skinny before or since.

A typical day started at 4:30 a.m. and ended at midnight. Next day repeat. It wasn’t unusual to get less than three hours of sleep per night for weeks straight. Some nights it never ended with emergencies and surgeries and critical care. There was one week in particular I still have dreams about where I worked from 5 a.m. Monday until 8 p.m. Wednesday… without a break. That’s 63 hours, but who’s counting?

I had an exam Thursday morning and guess what? I slept through my alarm and missed it.

In addition to the out-and-out sleep deprivation there was little to no opportunity to obtain food. Seriously, was I going to the grocery store at midnight and interrupting my coveted three hours of sleep? I think not. 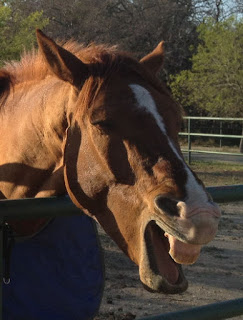 The pharmacist at the school always kept a large bowl of animal crackers on the pharmacy counter, and I’m certain that I’m not the only vet student who only survived clinics thanks to those animal crackers.

It’s a funny coincidence that while stocking up on food before I headed off to my working student adventure, I bought a large jar of animal crackers. For some reason this last week made me think about that bowl at the pharmacy. 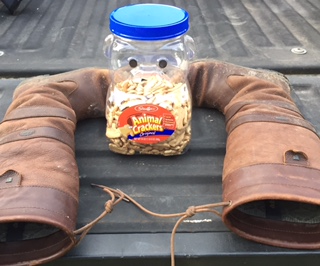 I’ve officially, or perhaps unofficially, survived my first week. I’ve decided there are stages of “working student training” and the first stage is the “not-worth-the-air-they-breathe” stage.

That’s where you can’t remember the easiest thing — like put the horse in the stall and turn the fan ON. Take the horse out, fan OFF. 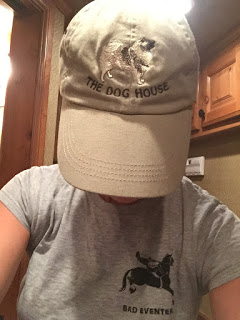 I am hopeful, as I’m finishing day 10, that I’ve passed that first stage where you are worse than useless. (More on the stages of working-student-training later.) 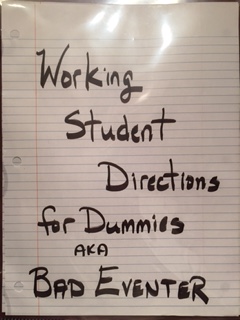 It’s been an interesting week and I thought I’d share a few working student tidbits.

2. Getting to ride more than just your horses is awesome. Hours in the saddle, baby, that’s what it’s all about.

3. Even if you’re on your fourth large bottle of water, it’s not enough. Pee that looks like coffee is not OK.

4. Just as I was thinking that maybe I’ll survive without dying of heat stroke, I find someone who just mucked an entire barn, in a blistering hot metal shed, lifting weights.

5. Dubarrys aren’t waterproof when the water is running into them from the sky. It took five days for them to dry out from a summer thunderstorm.

6. Always look before you sit. I hooked up the water to my new-to-me horse trailer, and the first night at 2 a.m. I sat in a cold bowl of overflowing water.

7. When people ask you what you’re doing here and you tell people you’re the “oldest working student in history” they think you’re kidding.

8. When you’ve finished your fifth day in a row working 11 hour days in the heat and you’ve walked the 73 steps to the shower — and you realize you forgot your towel. It’s just not worth it to walk back and get it.

Drip drying was how I ended the day.

9. Riding your own horses during work hours is just awesome.

It doesn’t matter how many stall walls you’ve scrubbed or polo wraps you’ve rolled, getting to ride during your work day makes it all worth it. 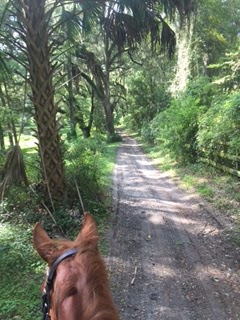 Stay tuned as we continue sharing Laura’s “Diary of the Oldest Working Student in History” adventures (and misadventures) throughout the week. Thank you so much for sharing, Laura, and for reminding us to Go Eventing, no matter what the odds.