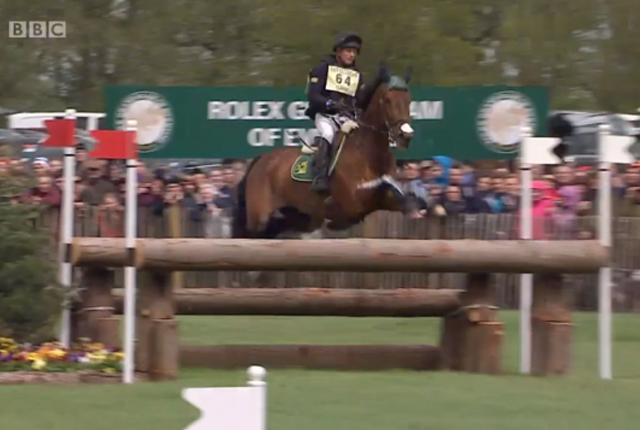 Peter Flarup and Calista E triggered the frangible pins at this fence when the mare caught a front leg on the back rail.

Cross-country day at Badminton 2014 was a gnarly one, but without frangible pins, it might have been much, much worse. Giuseppe Della Chiesa’s course took out over half of the field and produced some nasty spills — if you can stomach it, we rounded up a few of them here. Yet for all the carnage, there were miraculously few serious injuries and zero fatalities.

As tough as the course was, safety considerations were at the forefront of its construction. Nine fences were fitted with frangible pins, four of which were triggered on multiple occasions. Badminton reported that the pins at fences 7, the Team GBR Silver Birch, and 8, the Rolex Grand Slam Triple Bar, were triggered three times; the pin at 14a, the Gatehouse New Pond, was triggered seven times; and the pin at 15, the Vicarage Vee, was triggered twice. That’s a total of 12 potentially rotational horse falls that were prevented by frangible pins. 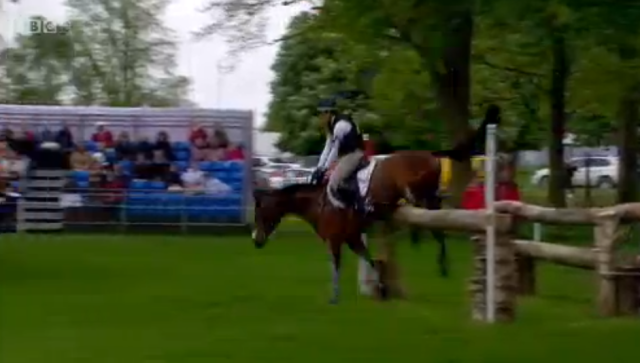 A frightening moment for Rebecca Howard and Riddle Master. They broke the frangible pin but recovered well, only to later part ways at the Mirage Pond.

On two occasions, the horse/rider combinations triggered the pins but went on to the complete the course without additional jump faults. Bill Levett and Shannondale Titan took down fence 7, while Nicola Wilson and Beltane Queen survived a hairy moment at fence 15 thanks to the top rail giving way:

FEI rules dictate that penalties for breaking a frangible pin are awarded under the discretion of the ground jury, and the ground jury did award 21 penalties to Nicola and Beltane Queen — a small price to pay for making it through the Vicaragee Vee unscathed.

Others weren’t so lucky, except of course in the sense that they were able to walk off the course unharmed.

This video shows a frame-by-frame breakdown of the sequence of events that followed. It was still a scary fall, but imagine it without the pins …

Injury- and casualty-free events are the result of a number of factors, frangible pins being just one of them: improved course design, better educated horses and riders, innovations in safety equipment like air vests, etc. And, clearly, Badminton’s organizers have a lot of hard questions they’ll need to answer before the 2015 event. But it’s safe to say that without the pins, this year’s event might have looked much different.