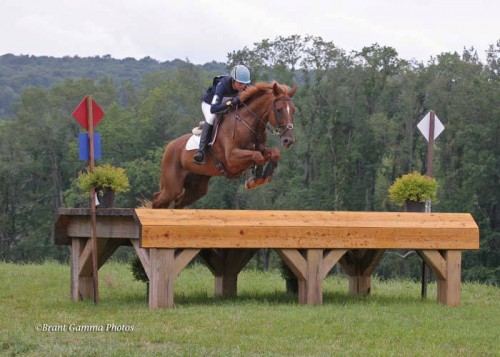 Liz Riley riding It's the Truth, her homebred, at Millbrook Advanced. Photo by Brant Gamma.

It’s the same conversation I’ve heard a million times. Both sides are passionate; both sides espouse anecdotes to prove their case, and truth be told, both sides are right. It’s eventing’s great debate: Is it better to produce you own horse and go up through the levels or buy a horse with experience to teach you how to get to the top? Recently on Facebook I saw two advertisements from top event riders, one titled “The way to get a top class event horse is to make it yourself” and the other titled “Want to go straight into the upper levels of eventing?! Buy one who is already made!”

Admittedly, I used to be a card-carrying member of the “DIY” side and would eagerly explain why producing your own horse and developing a relationship with it while learning together was 100 percent the best way to go. After all, could your first blue ribbon at Training level possibly mean as much if you’re riding a horse that has already gone Intermediate with someone else? Having now been a DIYer and currently riding a horse that knows more about eventing than I ever will, I believe the ribbon is just as meaningful, but in a different way.

The DIYers have much to be proud of. There is nothing like getting a young, green horse, training it yourself and ending up with a successful partnership. Whether you are an amateur and owner who wants take the horse up the levels or a pro that buys young horses for resale, the work to be done is immense. There is no better feeling than the first time your horse gleefully and confidently does the drop into the water, or gets that flying change,or gets on the trailer without a fight.

The DIYers are brave and tireless, and it’s really something to see the relationship they have with their horse. I have a great friend, Liz Riley, who was there the day her horse It’s The Truth was born, and now the pair is successfully going Advanced. Talk about being able to pat yourself on the back as a rider/trainer/owner. They have had more than their share of ups and downs, and she’s eaten dirt and dealt with lamenesses and setbacks, but she can look at the horse and tell you exactly what he’s thinking; it’s uncanny.

I, for one, cannot imagine completing my first Advanced cross-country course and knowing that I, alone, am the reason this horse loves his job and is willing to do it for me. Forget the ribbons even; just competing up the levels with my partner and best friend would be thrilling. Unfortunately, the DIYers can fail as well. We have all seen the talented and ambitious young girl get a nice horse off the track with the best of intentions, and then without a credible trainer’s supervision teach the horse to be a nervous and unrideable stopper by gunning it at big fences over and over while “teaching it to jump.”

There are lots of riders who simply cannot afford a “made” horse and have no choice but to be a DIYer, and that is fine; heck, that’s me. What I can say without any reservation is that the best DIYers take their time, have a plan and have a trainer or someone more experienced to help when the lines of communication between horse and rider are cut and they are struggling. Training and competing a young or green horse is never a walk in the park, and I hold the DIYers in great regard when they turn out a nice horse and bring it up through the levels.

On the flip side, there are the die hard “buy experience to get experience” riders. Until recently, I thought this way of thinking was for wusses, rich parents and those trying to make a team. My own naiveté was definitely inhibiting my education as a rider. Like I said before, I had always been a DIYer. I got my first horse when I was 13 and he was 4 . I grew up riding school horses, naughty horses and whatever had four legs and a tail that no one else wanted to sit on.

Honestly, I am quite thankful for that education, in that it gave me a sticky seat and a great eye for lameness. However, as I got older and more serious about riding, I realized that it’s incredibly difficult to teach something like proper lateral movements to a young horse when you’ve never sat on a horse that could do them properly. The shoulder-in was one of life’s biggest mysteries to me.  And why were trakehners so dang scary? Oh, because I’d always ridden the ditchy horses; I thought it was always a fight!

Proudly, I can now get almost anything to jump a ditch, but just looking at them once made me break out in a cold sweat. When I decided to “do horses” full time, I started to get the opportunities to sit on nicer and nicer horses, and my riding improved, and I started to get it. Now, I totally understand the parents that will put a second mortgage on their house in order to buy a safe, prelim packer for their novice rider to move up on. Not only is it about safety, it’s about education.

So began my education. Last July, Kiltartan “Tartan” came to me, and in the four months we’ve been together, I’ve learned more about riding than I have … probably ever. He’s 17, he’s grumpy in the cross ties, he loves to try to gently cow kick me when I pick his back feet and nudge me across the aisle when I bridle him, but he lets me kiss his nose and he loves long hacks and he’s the most badass eventer I will probably ever sit on.

He’s done two four-stars, nine three-stars and his USEA record is seven printed pages long. To say that he knows and loves his job would be a gross understatement. The first time I met him, I knew nothing of his record or his awesomeness; I was just feeding him and I fell in love with his bossy personality and his lovely blackness. I rode him once and was even more smitten, but soon after, he was leased out to teach a young girl the ropes at Prelim, and I secretly cried because I was struggling with my current mount and knew I would never get to ride a horse like him.

Somehow, the stars aligned and now he’s mine to ride, and he’s the star of my Instagram feed and keeper of my heart and my confidence in the irons. It’s not all easy though; he’s notoriously tough on the flat, not because it’s hard for him, but because he thinks it’s funny. Sometimes riding a horse that is well-educated makes you really doubt yourself. I am constantly asking myself, “Are my aids correct? Am I doing this right? Why won’t he put his damn head down?”

Sometimes the answer is, “You need to be more efficient and succinct and prepared as a rider.” And sometimes it’s, “He’s being an ass and laughing at me while I bask in a puddle of self doubt.” His bossiness is truly astounding, and it makes him a great teacher and a great eventer because it comes from him being comfortable and confident in who he is. I have had to learn to stop being complacent and not let him get away with being bossy on the flat. But at the same time, I know that if I mess up my turn in show jumping and have to jump at an angle or am a little nervous about the trakehner, he will take care of me.

This has made me a more confident rider and increased the number of tools in my toolbox, so to speak. These are the things you can really only learn on an experienced horse, and I’m glad I’ve been privy to seeing the other side of the coin in this debate. So whether you are a DIYer or not, there is much to learn and much to do. Try with all your might to ride all the horses you can because each one has something to teach us, and we owe it to them to be educated.