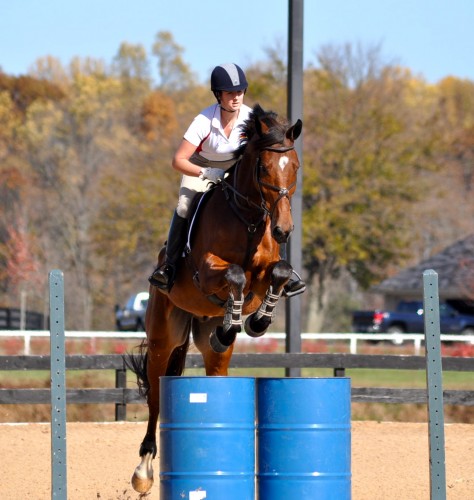 Alexa Ehlers and Clear Approval over the skinny barrels. Photo by Kate Samuels.

Day two of the William Fox-Pitt clinic dawned a little bit sunnier and a little bit warmer, which was lovely because we were all excited to jump with him and see what he had to offer. For the second time, we realized nothing enormously and obviously groundbreaking was happening, but William’s quiet and methodical way of training both horse and rider to engage their mental and physical talents was subtle yet effective. No, we didn’t jump anything enormous, but instead we did exercises that tested our competency without pounding on our horses’ legs.

Just as the day before, we were instructed to start out with a warm up that was designed to stretch them physically and test them mentally. “Don’t just putter around,” he said. “The important thing for jumping is listening to the rider and that they’re on the aids. A horse for jumping has got to be as connected between the hand and the leg as a horse for dressage. Get the horse down the rein and in front of the leg.” So, before we even jumped, we had to send them forward and bring them back, move them sideways and bend them around our legs to be sure that they were responding to all the aids before jumping. 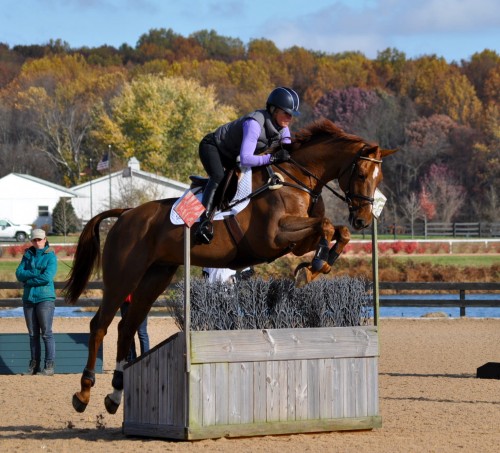 After warm up, each group was asked to trot a few small fences to get them thinking about jumping, and then we were introduced to walking jumps. While Sharon White was ahead of the game and said she was just thankful they weren’t four feet tall walk fences, most of the other riders and horses were feeling a little ambivalent. “Well this should be interesting, I’ve never done this,” Allison Springer could be heard saying.

A few horses simply walked up and stared at the fence with confusion on their faces and then lurched over with encouragement. Note: nobody looks good doing walk fences. However, it does create a horse that is willing to accept a contact on the way to the fence and take you there without accelerating, and it engages their hind end like no other. My group quickly progressed to walking skinny jumps, which was much harder, but after that, our horses were sharp and focused without the physical wear and tear of normal jumps. 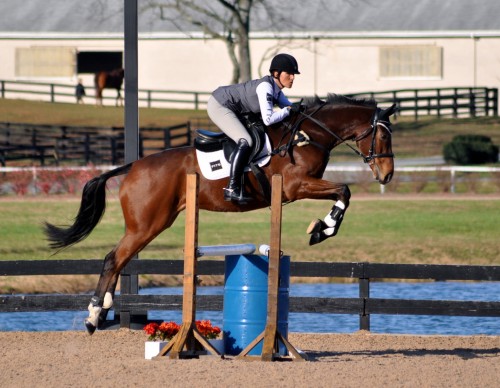 Each lesson then progressed to a series of skinny jumps on related distances with varying heights and difficulties for each group. However, even if you were in the Future Event Horse category, you still had to jump some of the same lines as the Advanced horses and train your young horse early to seek the flags, so to speak. “They should always be going around looking for the next possible jump,” William said. “Sometimes they’ll hone in on something not so reasonable, but that’s better than not looking at all.”

He was adamant that a secure contact and connection from good flatwork was what anchored the horse and rider together and created the ability to show them where to look. When practicing over smaller jumps and skinny jumps, it’s important to be able to indicate the next step to your horse in an instant, and if you don’t have a connection that affects the whole body, you’re out of luck.

If you can’t have the connection here, what happens when you put the jumps up, the angles become more extreme and you’re traveling faster at a competition? “I’m a big believer in gradual steps,” William said. “It’s the only way a horse understands a concept.” Basic horsemanship and training was what we were learning; the jumps were just incidental. 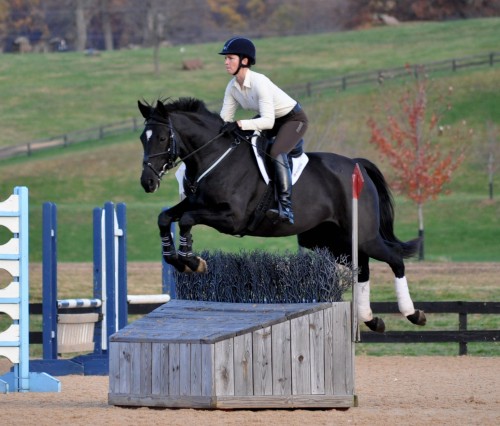 The groups of horses on day two were excellent, as each one had horses that we can all relate to, but on different levels of the training scale. There was the casual horse that needed to be sharpened up a bit with the exercises, the buzzy horse that needed a clear path to success in order to calm down, and the slightly worried horse that wasn’t always going to give you the jump unless you were positive and secure in your position.

What was amazing to me was that even with all of these different types of horses, and even though they ranged in skills from three-star to 4-year-olds, they seemed to meet in the middle after their lessons. All horses left with a calm state of mind that was sharp and focused, but not erratic. The casual horses found enough to intrigue them in the exercises and left a little more thoughtful. 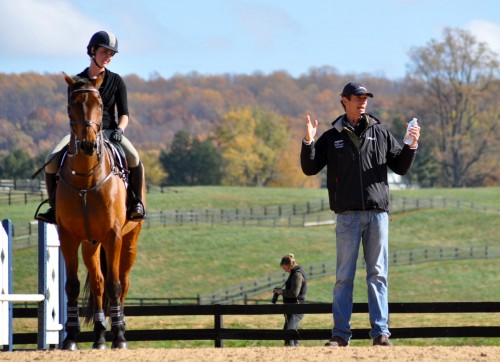 Receiving instruction from the master.

Riders were also instructed in how to explain the tricky combinations to our horses. He said that it’s important to land off the first jump, organize, focus the horse and then ride up to the second part. We were never to expect a takeoff and lean forward with our upper bodies before it was happening because that was a recipe for disaster later on. If it was a bending line, we were not to just wheel and gun it, but take our time.

If the horses were properly looking for the flags, they were more likely to take us to the jump and lengthen their stride if needed without hurrying. William was always understanding of the differences between horses, and based on their personal needs was perfectly willing to cater the lesson to them. If your horse is terrified of liverpools at home but jumps them at shows, no problem; you don’t have to press the issue.

At the end of the day, he was incredibly forgiving of little blips here and there, and even encouraged them. “We have to create situations in our training where they might have to make the odd mistake,” William said. “The most important thing that I want to see today is horses looking where they’re going. I don’t want horses to be waiting, waiting, waiting for instruction. I want them to be looking forward, watching how their expressions change and how their ears lock onto the fences.”

Thanks to our friends at USEA, we have some great video footage from both days, so take a look! If you’re interested in finding all the photos that I took over the two days, head over to the EN Facebook Page and look at the album; you’ll find hundreds of photos of all the participants and auditors.