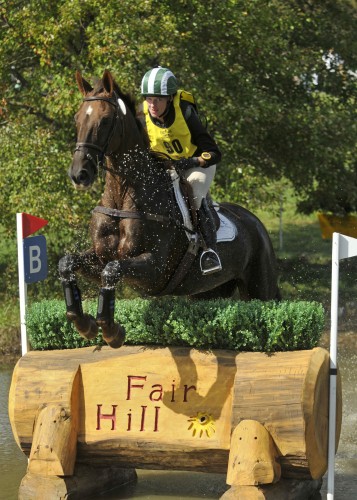 Sadly, the Eventing world has lost two great athletes this week, as Pippa Moon’s 3* horse Ribbo passed away Tuesday night unexpectedly in his paddock. This horse was a brilliant jumper and Pippa’s first everything, as well as teaching Sarah Murphy the ropes in his later years. Eventing Nation enjoyed tales of his funny quirks in The Ribbo Manifesto and stories of his pure athleticism in The Ribbo Chronicles earlier this year.

In a statement to EN, Pippa said, “I would like to let the EN readers that enjoyed the Ribbo Manifesto and Sarah’s Chronicles to know that he came home to my barn at the end of September. I got to spend my birthday with him, as I have for 10 years, and he was happy and sound and I will always be grateful to have had a few precious weeks of his company before he went. I expected to have years of him being a cranky, sway backed, hairy nutcase, but instead it was much shorter. I love him dearly and miss him terribly.” Our thoughts and condolences go out to all those who were touched by Ribbo and his family.

Have you heard this week’s Eventing Radio Show? I think it’s an especially good one. Hosts Jess Montgomery and Samantha Clark discuss Pau and Galway, and even get the behind the scenes insight from Lynn Symansky and Buck Davidson. Matt Brown talks about how he brings up young horses, and the good times roll. [ERS Episode 273]

I know what you’re really wanting….more from the William Fox Pitt Clinic!! Don’t worry, I have the second installment coming later this morning, and I’m adding photos to the EN Facebook Page as the day goes on, but for right now, enjoy these photos taken by Leslie Threlkeld at the USEA. [WFP Jumping Gallery] [EN Facebook Album]

Let’s talk about Britain’s rising stars: Fenton Kirkland and Harry Edwards Brady. These two very dapper chaps are the age of three, and already taking the pony scene by storm. Not only are they competing in hand with their young ponies, but they are riding in classes in the Horse of the Year Show in Britain alongside much older competitors. Olympic team 2032? [Where The Brits Get Fox Pitts]

Boyd & Silva Martin are hosting yet another fabulous schooling jumper show this weekend at their facility in Cochranville PA. Starting at 8:30 am with rounds at Beginner Novice and going all the way through to 5:30 at the Intermediate level. The jump courses will be exciting and challenging, and the company superb. To quote Dom Schramm: “If you don’t attend Boyd Martin’s jumper show on Saturday, you’re a disgrace”. [Windurra Jumper Show]

In news of the really weird, Toyota has designed a new “car” inspired by the bond seen between horse and rider. Say what? Exactly. This new motor car has no steering wheel, but rather responds to your shifts in weight backwards, forwards and sideways in order to navigate the road. What happens when I sneeze and convulse forwards!!? [Only In Tokyo]