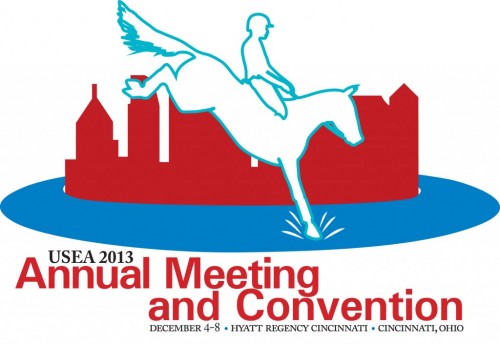 DOC Quote of the Day: “We’re looking for repeatable performances, not just from individual riders, but as a group.”

Today’s High Performance session kicked off with Dr. Mark Revenaugh, the lead vet for Team USA, and Dr. Duncan Peters, the evaluating vet for Team USA, discussing two new drug rules that will go into effect in 2014 is part of the FEI’s ongoing effort to implement its Clean Sport Initiative.

Team Testing: If one rider on the team tests positive for a banned or prohibited substance at a team competition, the whole team is now disqualified, even if there’s a drop score available. It used to be that if a horse tested positive, only that rider was disqualified and the next score on the team counted. The FEI is continuing to implement the Clean Sport Initiative, so what’s why this new rule is going into effect.

8-Year Rule: As new tests are developed to more accurately detect banned and prohibited substances, the FEI can now test stored samples up to eight years after competitions. Even if the horse didn’t test positive at the competition, titles and medals can still be stripped if the samples test positive up to eight years later. “This is a very real part of our life now,” Mark said. “We’re trying to be proactive and not just reactive. The FEI has decided that they really want to be tougher on any type of infraction. The FEI has decided to be absolutely relentless.”

“We can no longer rely on a lot of how we’ve typically treated horses on Saturday night after cross country as far as medication, which really emphasizes what you can do leading up to the competition,” Mark said. “We really have an emphasis on being proactive and getting the horses to the competition as sound and as fit as we possibly can.”

The 8-Year Rule will primarily play in at the WEG and Olympics, and perhaps the Pan Ams. You can have a positive test for something that didn’t test positive at the time of the competition due to new, more accurate tests being developed. Just because you pass the drug screen at the event doesn’t mean you’re in the clear anymore.

Logbooks: The new drug rules set the stage for looking at the requirements for the horses. High Performance will now issue logbooks so riders can keep detailed medical records in order to assist the team vets in assessing horses.

Dr. Duncan Peters has developed a log book that will be provided to the riders so they can track physio work, supplements, medication, etc. At this time, the log book is not required, but riders need to be able to provide accurate and thorough medical records on their horses at all times. “This a no-brainer way to help everyone keep track of what has and hasn’t been done to their horse,” Mark said.

Dr. Peters explained the logbooks will be set up much like an FEI passport, with an area for the date, condition that’s been diagnosed, diagnostics and treatments provided.

“It collectively will help to manage and keep all the information in one area. We want to be supportive and helpful and be an outside set of eyes that can help manage with you. We don’t want to take away from the veterinarians and the team you’ve set up. But if we can help provide oversight and prevent any problems, we want to help,” Dr. Peters said.

Doug Payne asked about security at competitions, as there’s now even more of an increased concern about horses being sabotaged. After a serious moment of silence in which I imagine all the riders were thinking about how easy it would be for someone to slip their horses a banned substance, Will Faudree wisely quipped, “Get duplicates of your medals made.”

Dr. Peters explained that most venues are now going to have security cameras. “At competitions, I don’t think that’s going to be quite as much of a problem. But the month leading up to that is definitely a concern, so the riders need to know who is handling their horses and who is around them.”

David noted that the log books will be voluntary, but he hopes all the riders will get into the habit of using them. “It will be mandatory for the WEG team from the time of selection June 20 through the Games,” David said.

The FEI actually currently requires riders to keep a logbook, as they want to see those records if a horse does test positive. So the new 2014 drug rules are really a major factor for implementing the logbooks.

Saumur CCI3* — Another chance to see Pierre’s courses. Saumur was very supportive this year of a team being there and asked us to return.

Luhmuhlen CCI4* (secondary) — “When we really think about the Games, your primary way to go is through Kentucky or Jersey Fresh because of the time between those and the WEG,” David said. “If that doesn’t work out and we need to adjust, we can work it out.”

Burghley CCI4* — The alternates for WEG will go to Burghley, as it’s the next week.

Blenheim CCI3* — This is a very good first international three-star in Europe. “It’s a 3 1/2 star, so you don’t take a young horse,” David said. “It’s not that course. But as a first European experience, it is a fantastic place.”

Boekelo CCI3* — Nations Cup is an important program David wants to keep going, especially based on support received from the USOC. “Boekelo is still very strong in the dressage,” David said. “It’s almost the 8-/9-year-old Championships in some ways. The cross country is not as strong as Blenheim. It has a different feel to it when you get there. It’s a great part of your education to show where you are.

Pau CCI4* — “I would encourage it for a horse’s first four-star,” David said. “Burghley is outright not the competition for every horse. There are a lot of horses I would say could be medallists at WEG and the Olympics but are not Burghley horses. It has terrain that can be tough for horses, and it can take a lot out of horses. … It needs to be in your mix for your career, but it’s not every horse’s competition.”

The WEG squad named no later than June 20. The team and alternates will then come under team control, and logbooks will be mandatory. Drug testing can be done at any part of the process, and out-of-competition drug testing is a part of the selection procedure. David will develop a plan with each rider and travel to individual farms to coach.

There will be a combined test prep event the week of July 26-30 in Great Meadows, Va. That still needs to be approved by the High Performance Committee, but David believes it will be approved. Irrigation has been promised for the footing at the venue. Dressage will be held in the morning, with show jumping held in the evening. A fundraiser will likely be held that night, with cross country held the first thing the next morning. “It won’t be a tough cross country,” David said. “We’re not testing the horses; we’re preparing the horses at that point.” Any European-based horses named to the team would run a prep event in Europe in the first week of August.

“We need to be quite flexible in the last eight weeks. A lot of times, we’ve committed to a place and then the weather turned and suddenly that was not the place where we wanted to train,” David said. “If we get drought weather, we’ll go to places where we know we can manage the gallops.”

The alternates will be named as grant recipients to Burghley or Blenheim but will still come to training camp in case a replacement is needed.

David showed pictures of the course at Haras Du Pin that he took during the Test Event. The terrain features a lot of short, sharp hills that create a type of roller coast effect. There is a large, flat section toward the middle of the course, which will have an optimum time of 11:40.

Look for U.S. course designers to inject elements of WEG course designer Pierre Michelet’s style into their courses this year in order to prepare the horses and riders that will be named to the team.