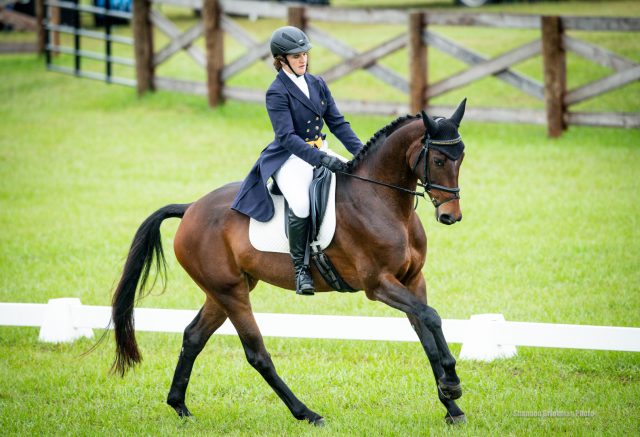 Dressage marks are a reflection of your training — but what if you don’t have access to training all the time? Photo by Shannon Brinkman.

Once every two weeks, I trailer over to my dressage coach’s farm for lessons. She’s rarely there. She spends the winter season in Florida, but she has a built-in camera in her arena at her facility in Maryland, which is close to where I live. When I arrive, I tack up and get on my horse, and then I call her. She can see me on her camera, and we proceed with a lesson just as if she were sitting at C.

I was skeptical at first -— I thought that my coach would have to see me and my horses in the flesh from inches away to teach us effectively. Somehow, the separation of the camera would change the dynamic.

In fact, it does not.

Perhaps the only difference is that both teacher and student need to remember to charge their phones before the lesson. Remote lessons feel and work exactly the same way in-person lessons do. There is simultaneity, direct feedback, and the possibility of accessing coaches who live hundreds or thousands of miles away.

The effectiveness of remote communication — whether through Zoom, Google Meet, or some other medium — took almost all of us by surprise during the pandemic. Suddenly people in different time zones could meet simultaneously with remarkable success. Obviously the importance of seamless, efficient platforms is integral -— otherwise, people become frustrated with unclear connections and delays in sound or visuals. But the major lesson from the pandemic about remote meetings was that they are excellent substitutes for in-person meetings.

The equestrian world would do well to embrace this lesson more broadly. I only know three coaches who do remote teaching. Not only could coaches expand their market reach by offering remote services, but students could gain access to so many more experts. There are different ways that people can do remote lessons.

My coach has a camera set up in her arena, so I can just call her on the phone. However, there are also apps like Ridesum, which is conveniently set up for it and has a nice recording option.

On the app, riders can either connect with their coach using two phones (one to record from the ground, and one to speak into) or just one phone (recording from a tripod and connected via Bluetooth headphones to the rider). Users can also record their lessons through the app and then watch them later, which can be a major benefit for learning and review of important concepts. There are also a whole slew of features useful for coaches to keep their busy schedules organized, making Ridesum worth checking out (and no, this isn’t a sponsored post!).

The advent of Zoom has meant that a college student in California can tune into a meeting with a team of researchers in Massachusetts without ever getting on a plane. It took a global pandemic for people to use technology in this way, at least on a regular basis and a major scale. Remote coaching has similar potential, but it has not caught on as much yet.

Apps such as Ride iQ offer access to guided riding, and more coaches are embracing remote coaching — but there’s still a ways to go. A live coaching app like Ridesum has the potential to make equestrian sport and training more accessible for riders at all levels by connecting them with trainers despite their location. Riders gain access to the Ridesum trainer pool with instructors from over 40 countries in every equestrian discipline.

Although it may seem unnatural or less real to have a lesson with a coach who is not physically in your arena, the differences between in-person and remote coaching are negligible. I was skeptical at first, but I liked my coach so much that I wanted to figure out a way to keep working with her. I am glad that I was open to trying the remote lessons because it has made continuity in our training throughout the year possible.

The horse world is known for being set in its ways and rather old-fashioned at times, but this is one area where the possibilities abound if we are open to some change. The technology is at our fingertips.