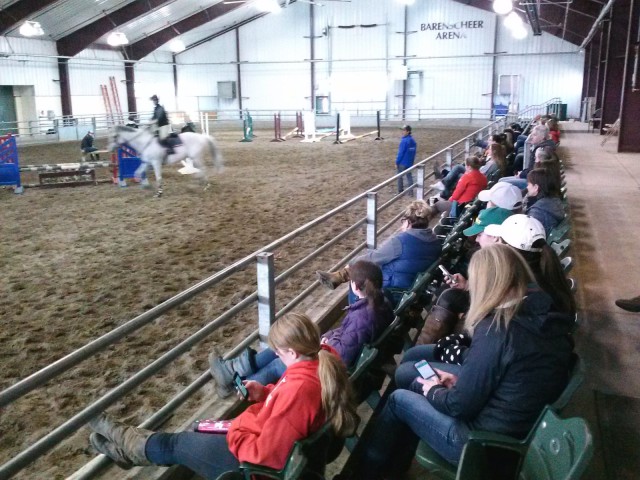 This past weekend Dom Schramm came to Minnesota (Go Area IV!) to teach a group of enthusiastic, beginning-of-the-season riders at the University of Minnesota’s Leatherdale Center. As the clinic organizer, this was by far the largest event I had ever attempted to pull off; the worry surrounding this was definitely proven by some of my late-night, wine-induced emails to two VERY helpful assistants.

After the flurry of scheduling, rescheduling, last-minute panicked driving around to get a working sound system up and running, and a few eleventh hour stabling crises, I had to rush across town to pick up Dom from the airport.

Five lanes of honking, squealing, merging-without-signals, yelling traffic later, I hit the hazards on my little VW Bug, waved to Dom at curbside pickup, threw his bag in the back and him in the front, and peeled out of the airport feeling like I had just kidnapped the poor man. Let the madness begin!

Those of you who have attended a larger clinic know how much of a whirlwind it can be, and as the organizer and head come-to-me-if-you-have-a-problem person, the whirlwind felt, at times, more like a cyclone. Are we in Minnesota anymore, Toto? 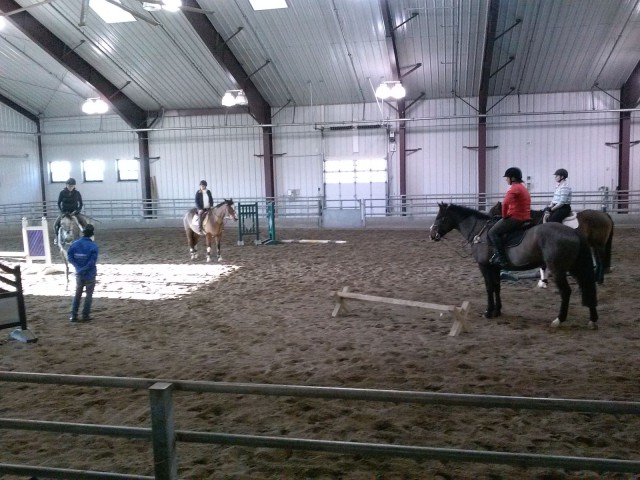 The first group in the arena!

Set-up Friday night was great, as some of my riders graciously lent a hand to put out pretty much every pole and standard available to us in a dizzying array of footwork and striding exercises. Saturday morning we were back at the barn early, me making coffee and answering last-minute questions, Dom putting the finishing touches on the exercises he was using for the riders that day.

I opened the gates of the indoor arena to our first group of riders, and we were ready for take-off. It was a heady feeling, watching this clinic that I’d been working on since January hit zero hour. Things were mostly out of my hands now, but Dom ran that clinic like the professional that he is.

Every session ran on time, and Dom was great about bringing the best out of each individual horse and rider without getting stuck on any one at the expense of the others in the group. He spent time answering questions, writing up fitness plans, taking selfies with the riders, and talking some of the more nervous riders into a place where they found confidence. 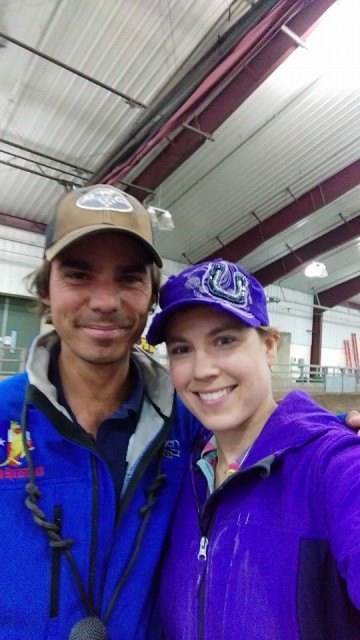 The exercises were tough, especially for us waaaaay up northerners just coming out of hibernation, but as I watched I was impressed at how everybody, from the Starter Novice group up to the established Prelim riders, tackled everything enthusiastically and made progress through the weekend.

Dom has a great way of bringing things back when ‘the wheels fall off’, taking a moment to just quiet the horse and rider before beginning again. The very Aussie ‘no worries!’ echoed throughout the weekend, putting everybody at ease and creating an atmosphere that invited people to try, to not be afraid of making mistakes, and to learn. 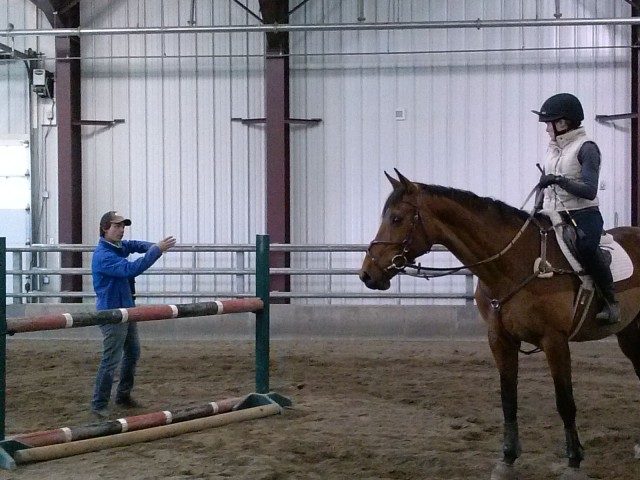 Dom chat with a riders about her goals and plans for the season.

Saturday’s exercises started off with two seemingly innocuous ground poles, five strides apart along the long side. Of course, riders were asked to put in 4, 5, 6, 7, and even 9 strides in some cases. The sessions moved along to include five bounces on a curve, three jumps on a half-circle that were two or three strides apart, depending on what Dom called out as the rider was heading towards the first, and two skinny fill-blocks with arches cut out of the bottom. 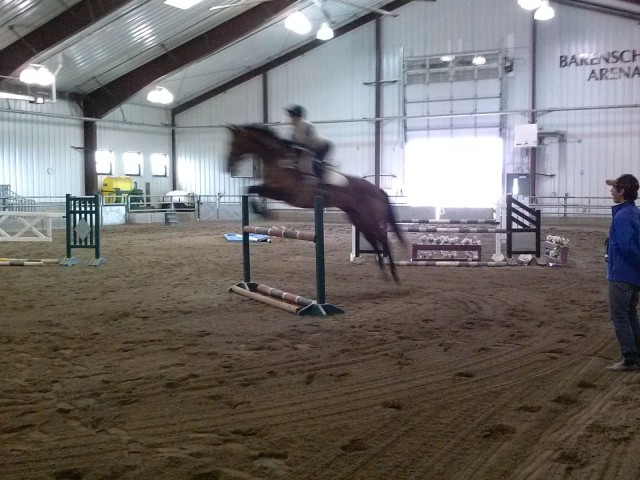 Dom looks on as a rider navigates part of a course.

I didn’t even have to ask for feedback — a peek through Facebook that night showed exactly how everybody was feeling:

Sunday was far less panic-inducing for me, after the relatively smooth success of Saturday, and I watched the first group go in without my heart feeling like it was going to fly right out of my chest. The sessions Sunday were more course-oriented, with some tricky lines and Dom insisting on riders getting the strides he asked for, changing up striding in the bending lines to create flexibility in the canter.

Dom was always quietly insistent that riders get it right, and if that meant schlepping poles around to create a tunnel block the left or right side of a jump to encourage straightness, putting apex poles in an oxer, or hefting cavalletti over to an exercise to encourage a horse to jump rounder, Dom was willing to put in the work to help the horses and riders succeed. 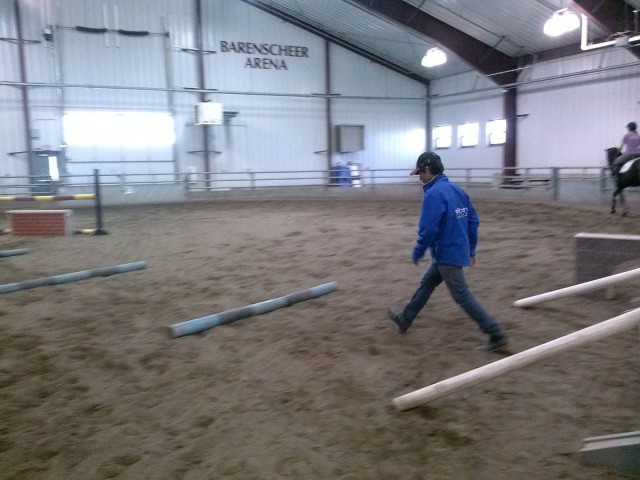 Dom walks out the distance for placement poles to help a rushing horse slow the canter.

Many groups Sunday also worked over a liverpool, and Dom’s took the time to explain his step-by-step approach for teaching not only liverpools, but any strange, scary, or difficult obstacle. He emphasized that it’s always OK to go back and break something down into smaller steps when a horse is having difficulty understanding the whole picture.
More than one rider was apprehensive about heading over the liverpool, but every horse jumped it within a few minutes when presented with the smaller pieces that encouraged relaxation in both the horse and rider. 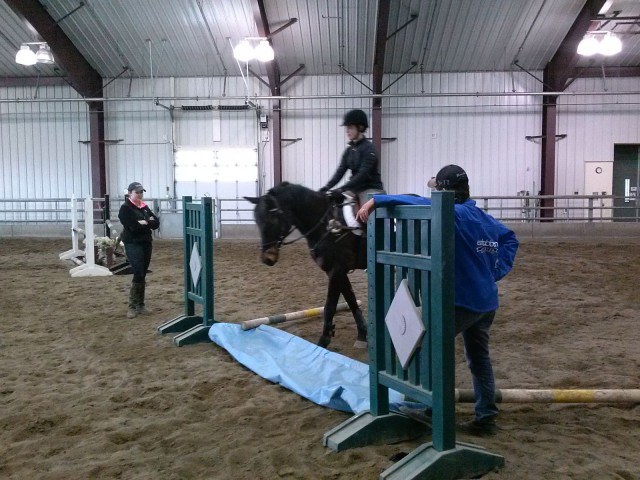 Putting the pieces together at the liverpool.

Minnesota will, happily, be host to Dom twice more this season, at Woodloch Stable in Hugo in July and September. I know many riders who are already looking forward to the next clinic installment, including me as I’ll get to ride!
Organizing a clinic of this magnitude definitely had its high moments, like watching Dom greet the first group and knowing the baby you’ve been slaving over for months has finally come to fruition, and its low moments, like mucking out stalls after people have left and forgotten to do so, and this one had some strange moments, like being called away to help get a lamb unstuck from a feeder in the livestock barns at the University. A
And it definitely had its satisfying moments, most memorably Sunday night’s celebratory burgers and local brews before Dom’s flight took off, the two of us clinking our ‘cheers’ to a job well done.
More Insanity on Horse Nation >>