Doug Payne is blogging about his week at Saumur with Crown Talisman, and he’s been kind enough to allow us to publish his musings here on EN. Tali shipped to the grounds from Fursan Equestrian Center in Chantilly this morning under the watchful eye of super groom Michelle Novak. Liz Halliday-Sharp and Fernhill By Night, our other American pair competing at Saumur, are on their way from her base in East Sussex, England. Stay tuned for much more from Saumur! 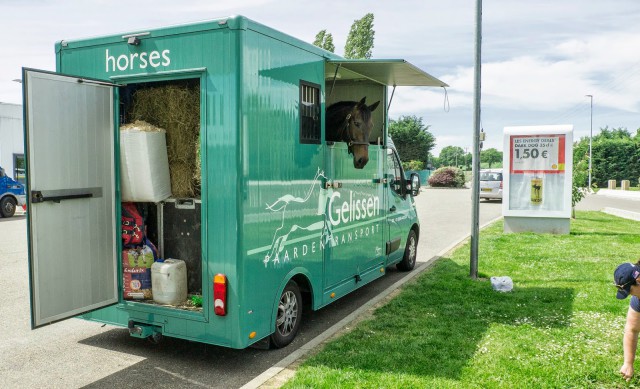 Spoiled much?! As Michelle picks some grass for an onlooking Tali at a rest stop. Photo courtesy of Doug Payne.

We started the day off with another ride in Fursan’s indoor. I wanted to make good use of the mirrors while they were available. Tali was quite good; I’m hopefully this trend will continue. At 10 a.m., our transport arrived. It didn’t take too long to get the truck packed; you’re probably not surprised based on its size! I think poor Tali was thinking the same; however, Roger was nice enough to set the truck up as a box stall for him. Reports from Roger and Michelle said he was much more comfortable as long as they were at highway speeds. Tali wasn’t all that patient in the Paris traffic! 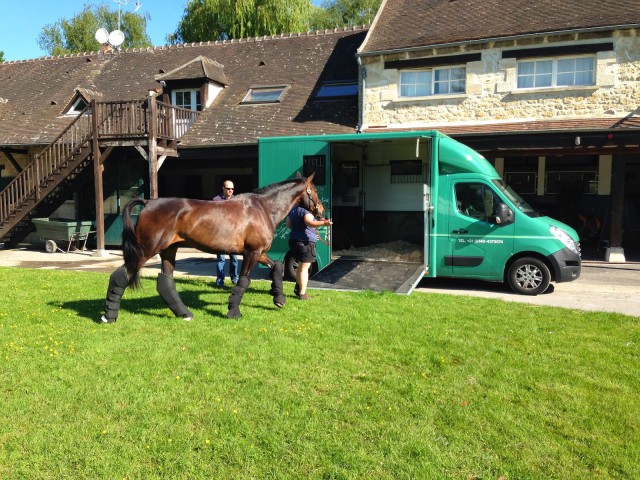 Tali loading up in Chantilly. Photo courtesy of Doug Payne.

I followed the truck from the farm in Chantilly to Saumur. The trip took us just over four hours — not a bad drive. The only hitch came when I got stuck at the toll booth for 20 minutes or so. Apparently the machine doesn’t like U.S. credit cards. I figured no worries, just hit the help button. Not only is the launguage barrier an issue, but the drive-through speaker system. I’m not exactly sure where I finished up; I have some sort of receipt that I’m nearly certain is to be handed over to the rental car company. I guess we’ll see! 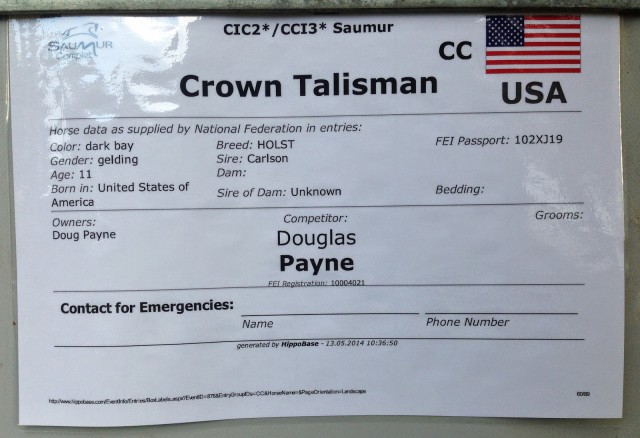 I arrived just a bit after the truck to the show grounds. The management couldn’t have been nicer. It was great to finally arrive, and, funny enough, Tali hasn’t been this settled since our departure. Something homey about tent stabling I guess! I took him for a walk around the grounds. Pictured below is the dressage arena, which also serves as a portion of the cross country. The soil is comprised of a sandy base with pine tress everywhere — a very similar feel to our new home in New Hill. I could only scope out a few of the cross country jumps. I can’t wait to get out to walk. Unfortunately, that won’t happen until after the briefing on Wednesday. 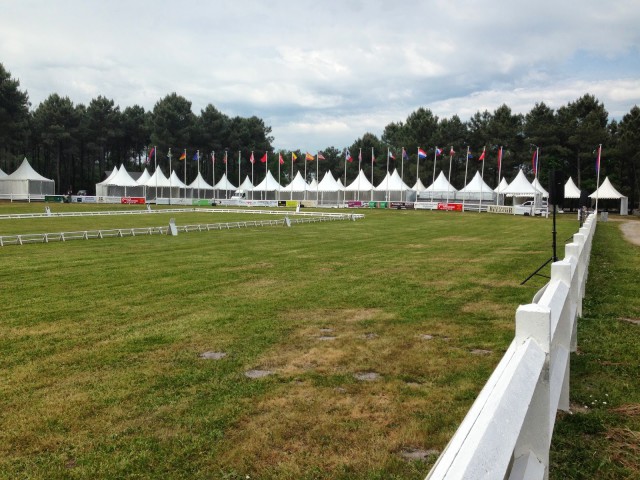 The dressage arena being set up. Photo courtesy of Doug Payne.

We returned to the town of Saumur to find our hotel. That is always a challenge without a map or GPS. Luckily, we found an Englishman on a bike whose phone data was working well and was able to point us in the right direction. After just one wrong turn down the wrong way of a one-way street, we arrived. 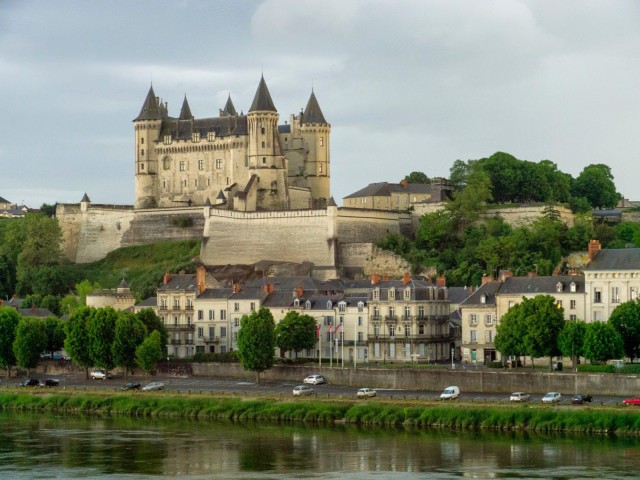 The view from the hotel. Photo courtesy of Doug Payne.

The first challenge entering the hotel room was figuring out how to turn on the lights. After killing 10 minutes hitting every switch in the place, I called the front desk. If you find yourself in this predicament, your door key also functions as a means to power up the entire room by sticking it in the wall receptacle. In looking out the window, I was again shocked at the beauty that abounds all around France. Roger actually told Michelle on the way to the event that they hold a dressage show up at the castle at some point during the year. Pretty incredible.

Thanks to super groom Michelle Novak for more pictures of Tali’s trip across the pond: 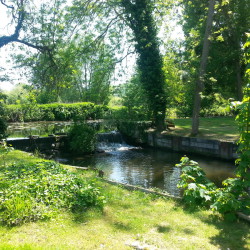 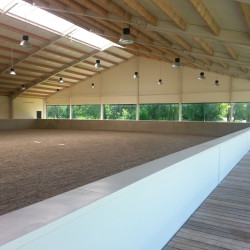 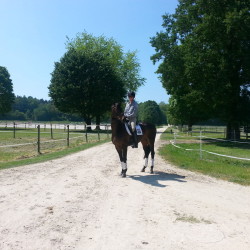 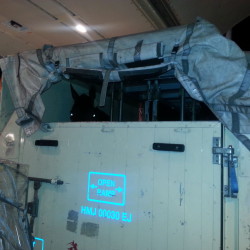 Crown Talisman in his box for the flight. Photo by Michelle Novak. 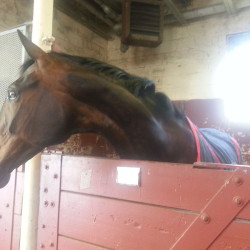 Tali hanging out at the vet port. Photo by Michelle Novak. 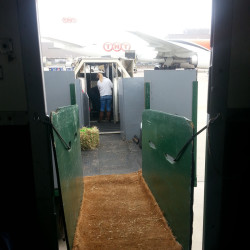 Getting on the plane for France. Photo by Michelle Novak.