Quantum made easy work of the #crosscountry at @tryonresort this morning to capture his first Advanced win! What an incredible baby horse, can’t wait to see what the future holds! #quantumleap #8yrold #eventing @susandrillock Killer video work by @courtlee26 & @shelleyhpage

Doug Payne is no stranger to the Tryon International Equestrian Center (TIEC), so it seems fitting that he would take the win in the Advanced section of the first annual Blue Ridge Mountain Horse Trials at TIEC, held Sept. 14-15 at TIEC in Mill Creek, North Carolina, aboard his own and Susan Drillock’s Quantum Leap.

The 8-year-old Holsteiner gelding made his Advanced level debut earlier this year at Pine Top and has since then primarily been competed at the CCI4*-S level. Doug has managed to consistently improve on the horse’s first phase performance over the summer and yesterday the pair turned in their first sub-30 performance at the level to sit in third place after dressage.

The Advanced horse trials competitors took centerstage for “Saturday Night Lights”  in the Tyron Stadium show jumping late yesterday evening. Doug’s experience moonlighting as a show jumper proved helpful as he was the only one in the division to post a double clear round, moving him into second place overall.

Cross country took place this morning on TIEC’s White Oak property, which played host to the cross country phase of last year’s World Equestrian Games (WEG). In fact, all divisions of the Blue Ridge Mountain H.T. ran on the White Oak Course today. Posting the fastest time of the day over the Captain Mark Phillips-designed course secured Doug and Quantum the win on a final score of 40.60.

Watch the videos above and below and you’ll recognize a few iconic landmarks and fences from WEG!

Take a trip around the key complexes of the @tryonresort Advanced #crosscountry with the winner Quantum Leap! #eventing @camboxhorse #8yrold #tiec @susandrillock

Allison Springer held a one-two lead with both her rides headed into the show jumping phase under the lights. Katie Lichten’s Sapphire Blue B, a 9-year-old gray Irish Sport Horse who simply sparkled under the Tryon Stadium lights, jumped a clear round just one second over time under Allison to eventually end their weekend in second place overall with 51.70 penalty points.

Unfortunately, the immensely talented but tricky first-placed Business Ben, a 9-year-old Thoroughbred owned by the Business Ben Partnership, took a number of rails to slip down the leaderboard. 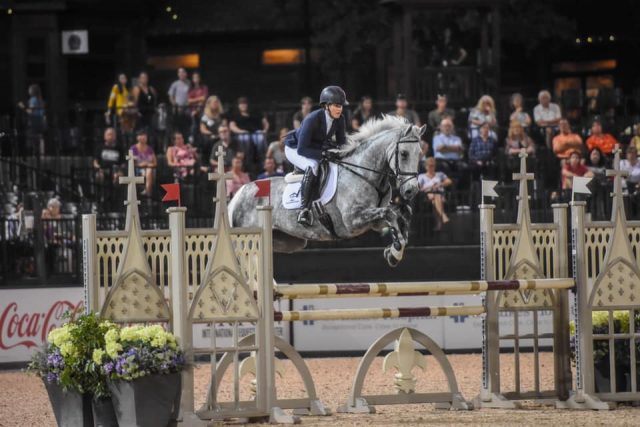 Rounding out the top three is Ema Klugman and 17-year-old Bendigo, owned by Jeni Klugman, who moved up to yellow-ribbon position after initially beginning their weekend in seventh-place following dressage. They also show jumped with just one time penalty and delivered the second fastest time of the day across the country to end their weekend on a score of 52.40. 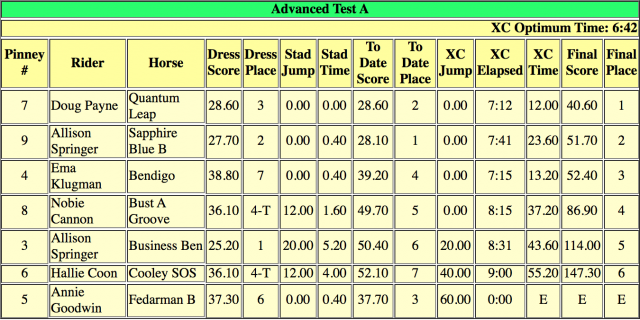