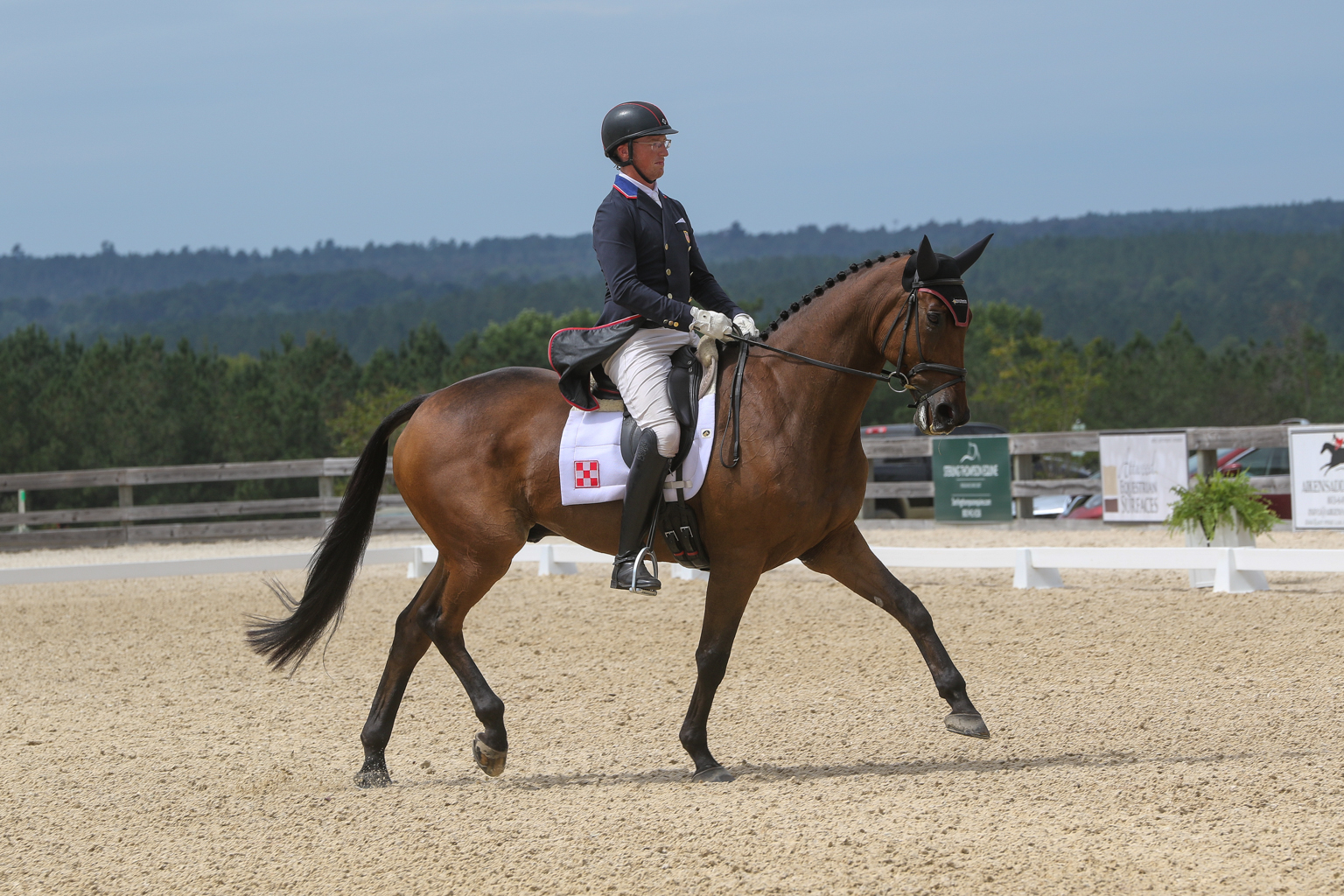 Doug Payne is comin’ in hot at the 2020 Stable View Oktoberfest. Paired with the experienced Vandiver, he won the Advanced two weeks ago at the Blue Ridge Mountain H.T., and the pair stepped up to lead this 40-entry CCI4*-S class today.

Where you shake out in the placings is one thing, but your individual results carry so much weight to these riders. Two weeks ago Doug and “Quinn,” a16-year-old Trakehner gelding (Windfall 2 x Mystic Replica XX) owned by Debi Crowley, Doug and Jessica Payne, had a personal best Advanced score (23.1), and today they produced a 24.3, their best result at the four-star level.

“He’s continuing to get better and frankly our time with Corona — our little Corona vacation — was really productive. He’s just getting better and better as he goes. There is certainly room for improvement, but I was honestly very happy with how he was,” Doug said.

In reflection, Doug says there isn’t any one moment that jumps out as particularly superb, it’s the progress with the overall impression. “In the end looking top down he was probably just about as consistent as he’s been yet. We had one little bobble, but that’s the thing that’s been missing in the past — being able to produce a very steady flowing test and he was able to do that today so that is exciting for his future.

“[We’re] trying to be super accurate and also making the transitions between movements seamless. I think that’s the biggest component that’s been missing in the past. It was lacking a little bit of the polish and especially the transitions. We’ve been lucky enough of late to be able to start to string that stuff together and produce a really polished, finished product,” he said. 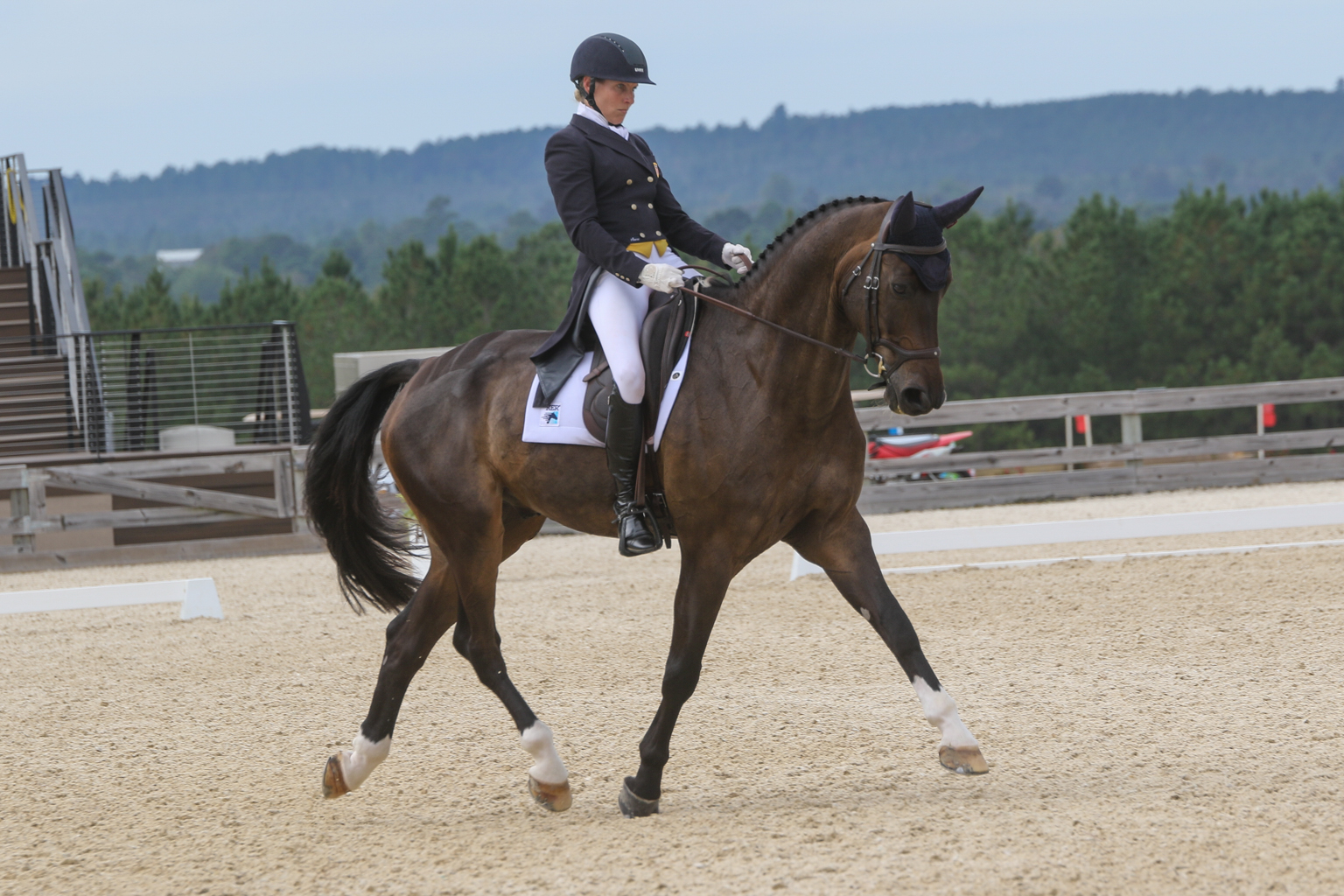 Liz Halliday-Sharp and Fernhill By Night. Photo by Stable View.

Second place belongs to Liz Halliday-Sharp and longtime partner Fernhill By Night. Liz has been very selective of where “Blackie” runs over the last several years, so her decision to come to Aiken, S.C. was tactical.

“I try not to run Blackie anywhere he can’t win money if I can help it,” she said of the 17-year-old Irish Sport Horse (Radolin x Argentina XII, by Argentinus) owned by Deborah Halliday. “I don’t run him a lot these days.  I was here in June and the ground was really really good. The surfaces here are always really reliable, so I thought it suited him.”

This pair is just in striking distance on a score of 24.5. “He was a good boy. He obviously knows his job and he is notoriously lazy. He felt really jolly and he was happy to be there. There were two little things that kept him out of the lead. He had a little hop in the turn on the haunches, and he tripped and nearly fell on his face in the last halt,” Liz laughed. “I’m very confident he would’ve been in the lead otherwise.”

Matt Flynn and Wizzerd, an 11-year-old Dutch Warmblood gelding (Wizzerd WV x Oklund) owned by Patrick Flynn, Kathleen Flynn, and Merry Go Round Farm, are in third place on 25.9. This pair, too, are on a hot streak after winning the other Advanced division at the Blue Ridge Mountain H.T. two weeks ago. 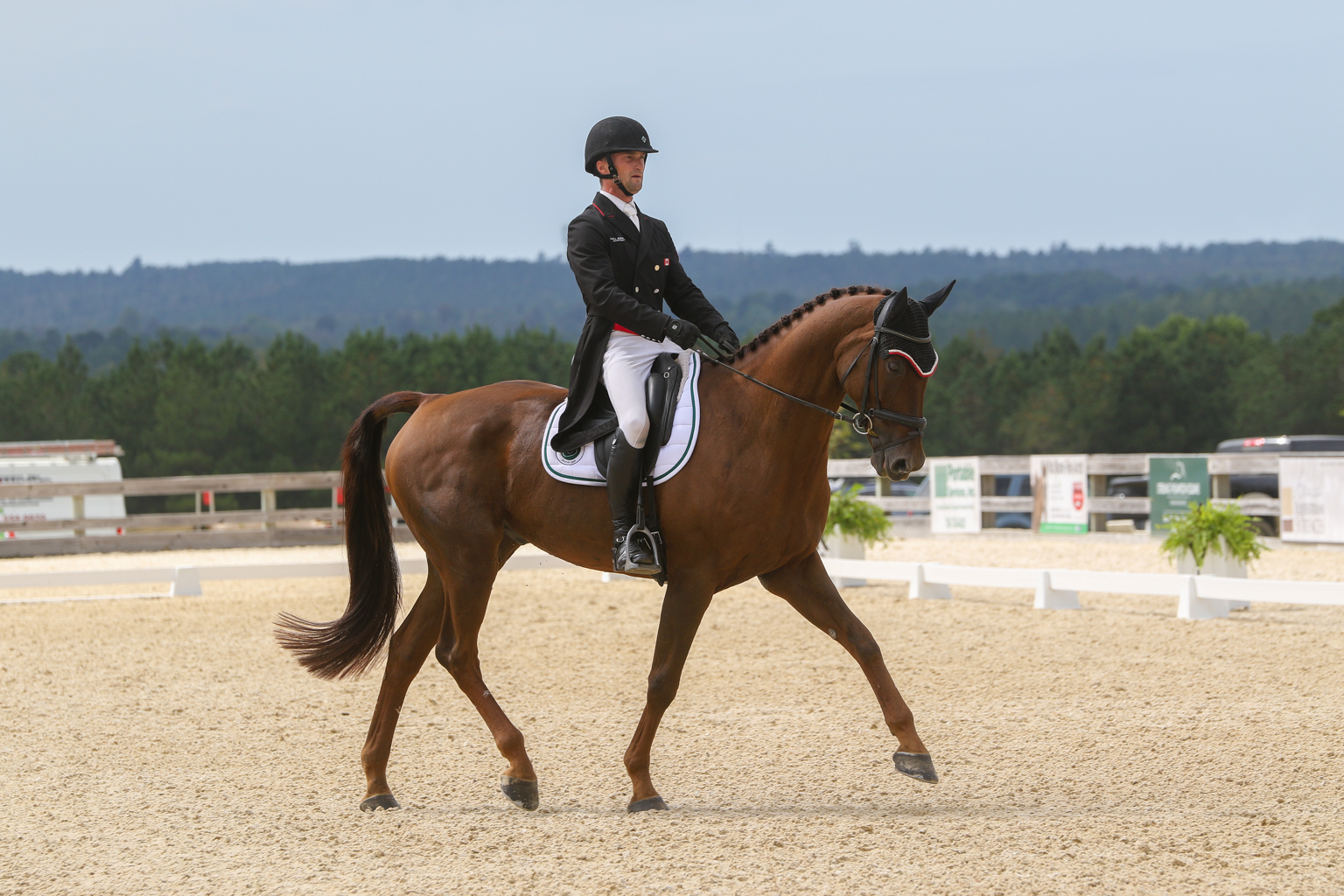 Fourth place is shared between Sydney Conley Elliot and Waylon Roberts on score of 26.4. Riding for Canada, Waylon is here this weekend with Lancaster, a 13-year-old Canadian Sporthorse owned by John Koppin, Michelle Koppin and Waylon.

Sydney, a self proclaimed perfectionist, is focused on how she and QC Diamantaire, a 10-year-old Oldenburg (Diarado x Lantana, by Sandro Hit) owned by Carol Stephens, can continue to improve her score moving forward. “‘Q’ is always a good boy. There’s still a lot to be desired from that horse, but it was steady. I’m very critical of him and what he gives me every test, but he was such a good boy overall,” she said.

This pair is having only their second start of the year. “I think their brains and body got a much needed vacation. Q had not been out since Fair Hill, so Chatt Hills was our first outing — he hadn’t run cross country in almost a year. He was awesome. He’s such a lazy horse by nature, so it was fun to have him excited to leave the start box and a little riled up.”

With COVID-19 all but destroying our season, we’ve got a beefy CCI4*-S lineup for you this weekend. Forty combinations have stepped forward, and they’re packed to the brim. The top ten are spread over just 3.6 points — less than one rail over tomorrow’s show jumping. This will make accuracy and speed essential in the jumping phases, or the door will be wide open for a shake up. 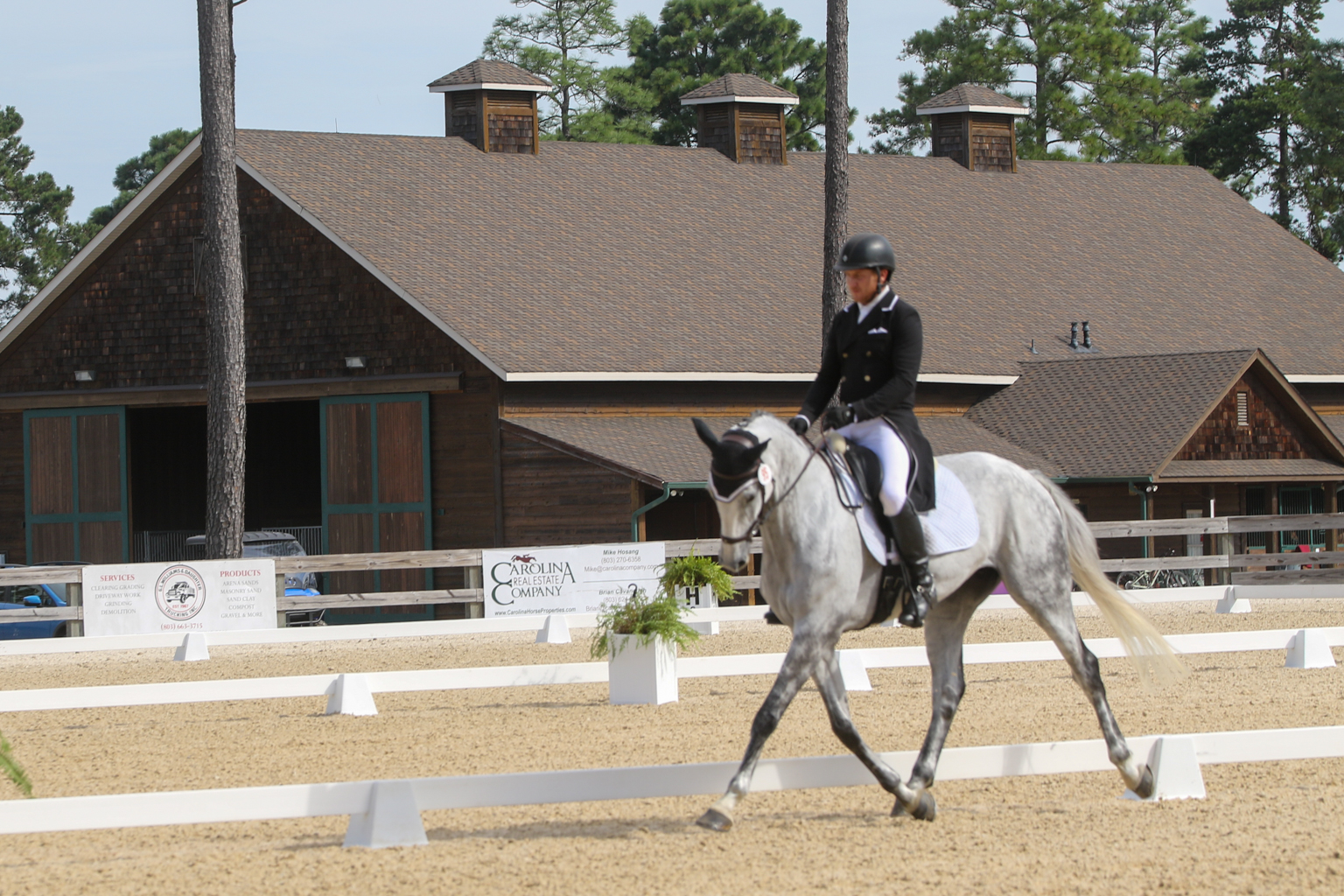 Kurt Martin & D.A. Lifetime won the dressage in the CCI3*-S. They’re on a score of 27 ahead of the show jumping phase. Alex O’Neal is second with Miss MoneyPenny V on a score of 29, and Zoe Crawford is third with K.B.S. Quick Strike on 29.3 points. 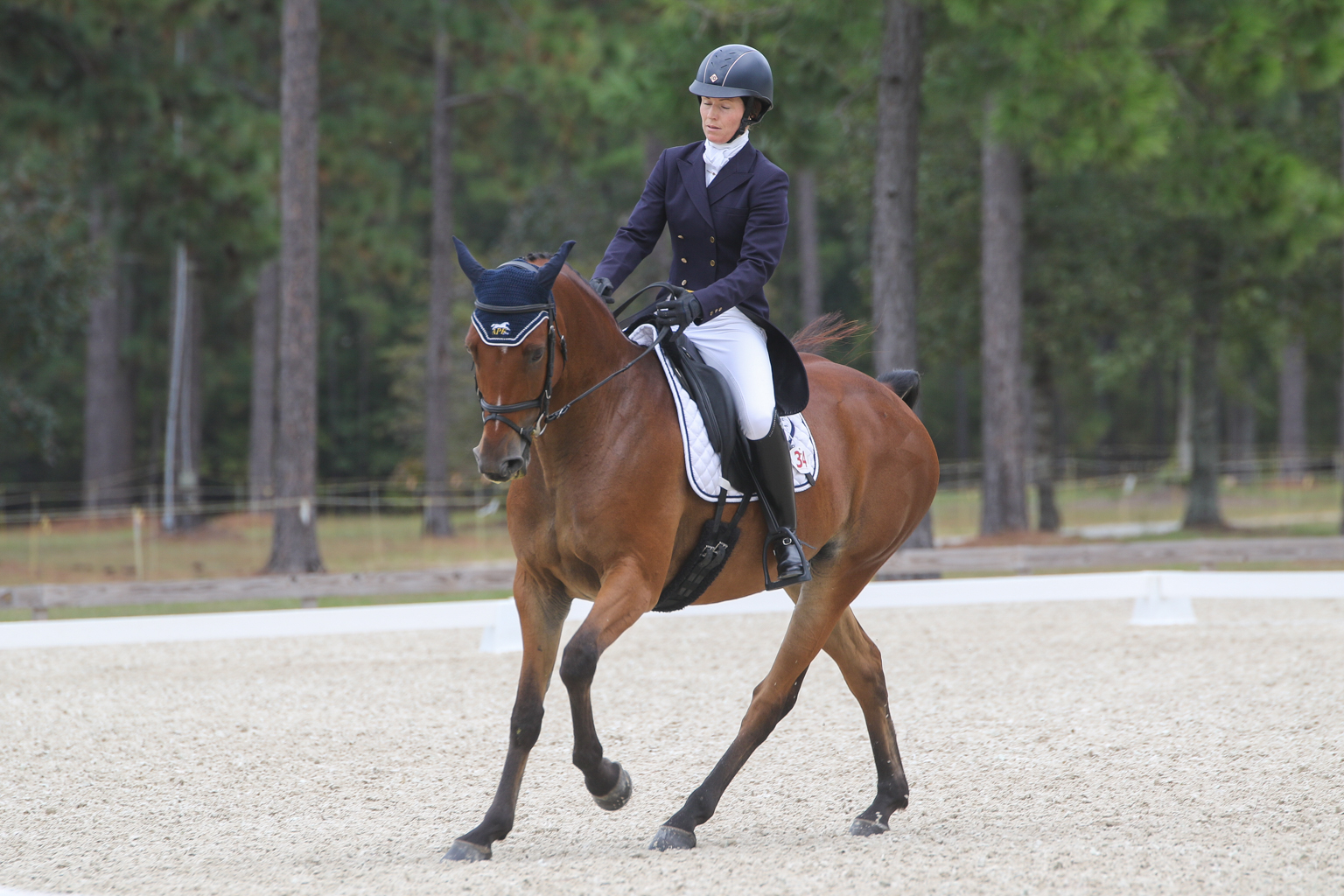 Kelly Prather and Catch Me Cooley. Photo by Stable View.

Liz Halliday-Sharp leads the CCI2*-S division with Maryville Sir Henry on a score of 27.4. Dana Cooke holds second place with FE Whole Lotta Rosie on 28.4. Kelly Prather piloted Catch Me Cooley into third place on a score of 28.9.

Show jumping kicks off tomorrow morning for the International divisions. The four-star will start at 9 a.m. followed by the three- and two-star groups.