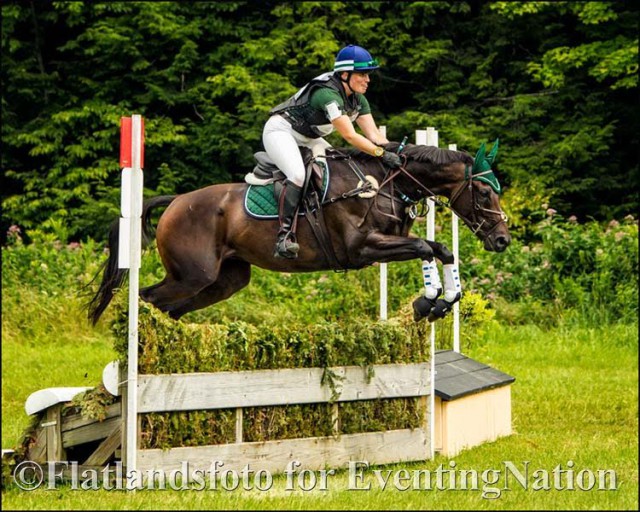 Ashley Taylor was bitten by the horse bug early in life. Now she’s living her dream both as an equine veterinarian working alongside one of the country’s top professionals, Dr. Kevin Keane, and as an active eventing competitor training with some of the country’s best riders.

Growing up in Topsfield, Massachusetts, 8-year-old Ashley began riding with her local United States Pony Club chapter. Pony Club was where Ashley was first introduced to eventing and gave Ashley the opportunity to ride with a variety of instructors — two of the most influential being Betsy Reeves and Kara Riley-King.

Shortly after joining Pony Club, Ashley attended Groton House Farm Horse Trials and was hooked on the sport. “Eventing is an outlet where I can combine my love for speed, jumping, fitness and finesse,” she said.

Pony Club also introduced Ashley to the world of veterinary medicine. “When I would study for my ratings I always wanted to learn as much as I could about veterinary care and management,” Ashley said. “I wanted to understand everything there was to know about my horse. I was one of those little girls who always wanted to be a vet.” 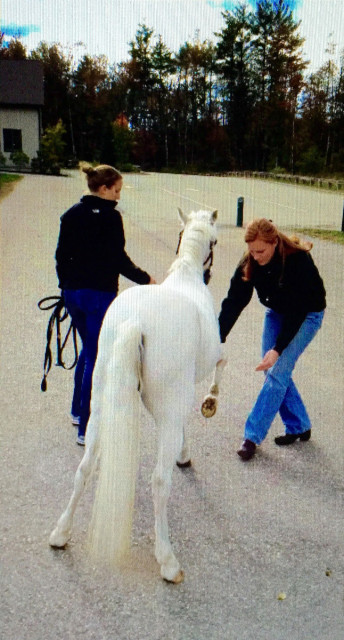 Ashley jumped right into her future career after high school by entering the Pre-Vet program at the University of Findlay in Ohio. Initially she brought her horse, Ranger, a Thoroughbred/Quarter Horse cross with whom she competed through Novice level.

However, the summer before sophomore year he became injured, was retired, and stayed home instead of returning to Ohio with Ashley. By then there wasn’t much time left over for riding anyway — her time outside of classes was filled with working for the pre-veterinary barn and the University’s equine veterinary service.

The summers between school years were equally as busy as she either worked at veterinary practices or did barn jobs, but at least they offered Ashley the opportunity to get some riding in.

“I did lease a few horses and try to get my Pony Club ratings and continue to compete, but that was challenging since a few months was never enough time to get acclimated to a new horse,” she said.

Ashley continued to be horseless until the summer of her third year of veterinary school at Michigan State University, when she bought a young Thoroughbred and shipped it to Michigan.

Unfortunately, a bad fall from that horse resulted in a broken neck and sidelined Ashley from riding for a while. After recovering, she took a working student position with dressage trainer Katie Baird while still in clinics of her fourth year of veterinary school.

Balancing riding, working student responsibilities, and veterinary school clinics was not an easy task. “Often times we would be riding at midnight in the indoor arena. It was not the kind of lifestyle many people would choose to uphold, but it was the only way I could fit everything in and the barn became my home away from home,” Ashley said. “Kate was very flexible with my schedule so as long as the work got done she didn’t care when in a 24-hour period it got done.” 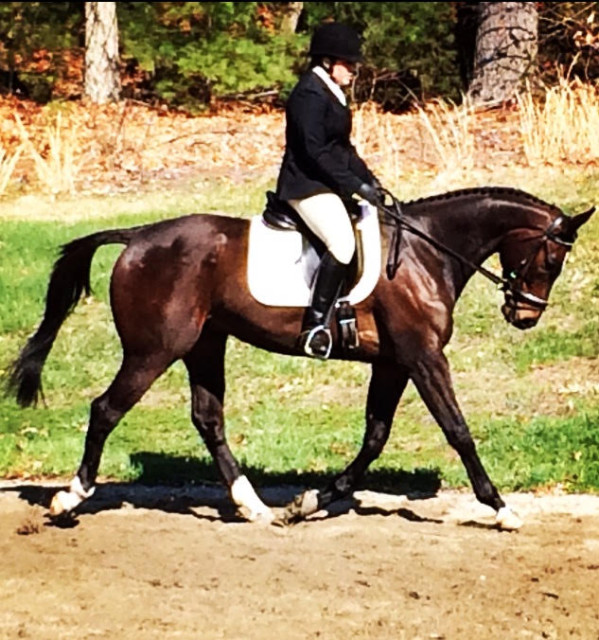 “Growing up in Massachusetts and having all of my family living on the North Shore was always a large draw to return,” she said. “I always wanted to come back to the area and practice where I grew up and continue to be a part of the horse community on the North Shore.”

Once her internship was completed she joined SRH Veterinary Services of Ipswich, Massachusetts, a neighboring town of Topsfield. “A lot of my clients have been horse people that were a part of my growth as a horsewoman and supported me while I was in school. I think that is a unique situation that has been very special to me,” Ashley explained.

During her second year of work with SRH, Ashley travelled to Aiken, South Carolina, to operate “SRH South” and there she was introduced to Dr. Kevin Keane and the two spent some time working on cases together.

After discovering that they shared a similar philosophy on management of equine sports medicine cases, Dr. Keane asked Ashley if she would be interested in joining his practice, Sports Medicine Associates of Chester County, in Pennsylvania.

Though she was saddened to leave her New England home, family, and clientele behind; she was excited to work with one of her professional idols and be based in Unionville, Pennsylvania – a hub of eventing. “Working with a very impressive clientele of professional riders and top class horses is a dream come true and an experience of a lifetime,” she said.

Ashley aspires to someday be recognized as a top equine sports medicine veterinarian and within a year plans on obtain FEI certification to be eligible as a veterinarian at FEI competitions.

Working alongside Dr. Keane, who has served as Treating Veterinarian for multiple Olympics; World Championships; and European Championships, is offering her an incredible opportunity to learn from the best. 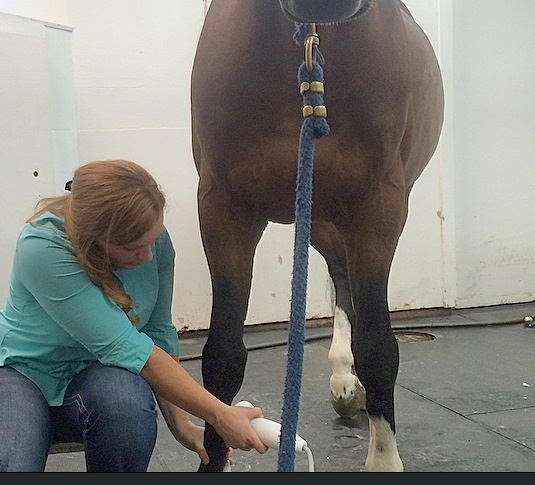 This learning opportunity is not limited to equine medicine, however, since Ashley also aspires to continue riding and competing in eventing, perhaps someday even above the CIC* level. “I believe riding makes you a better sport horse veterinarian by understanding the goals of your clients and needs of their horses,” she said. Dr. Keane himself is also an active competitor, having competed twice at the Rolex Kentucky Three-Day Event with Fernhill Flutter, and currently riding Training level with Vindakova.

Ashley went through another lull in riding after selling her first Thoroughbred and didn’t get seriously back into competing until about a year and a half ago when she bought her current horse, Untouchable Rock, a 7-year-old OTTB.

“When I bought Rock I was looking for a young horse that had upper-level potential and, with training, could minimally do a CIC*,” Ashley said. “After I jumped him around his first cross country school while I was trying him I fell in love and had to have him. What I love about Rock is that nothing feels hard for him. He is extremely athletic, and catlike, although he can be a bit lazy. He is a perfect combination of athleticism and has a great mind.”

Currently, Ashley and Rock are competing at Novice and are on track to move up to Training. The move to Pennsylvania left Ashley temporarily without a trainer since she left behind Babette Lenna at Gathering Farm in Hamilton, Massachusetts, but given the area she was moving to Ashley was confident she’d be able to find someone new to ride with. Since beginning her new position in Dr. Keane’s practice Ashley has begun riding with Waylon Roberts. “He is nice enough to meet me after work for lessons!” Ashley said.

Managing a busy schedule as an equine veterinarian along with riding and competing your own horse is still no walk-in-the-park, but according to Ashley it’s not impossible. “Balancing riding, lessoning, and competing with practicing veterinary medicine is difficult but doable. I have to be organized about how I run my day and stay disciplined.”

Veterinary medicine can often times be unpredictable; there’s sometimes no telling how long a case might take and emergency calls will change the schedule without a moment’s notice. “I am also fortunate to work with another veterinarian who competes. We organize each month based on what events I would like to go to and what events Dr. Keane would like to go to. We then figure out who will be on call based on that.” 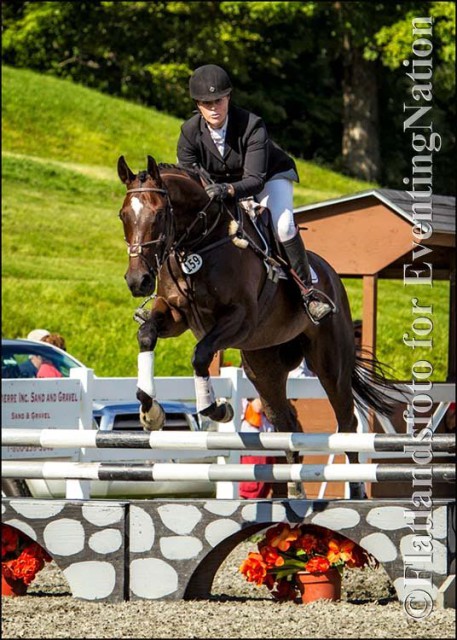 Ashley finds that riding first thing each day makes her schedule more manageable. “If I ride my horse first thing in the morning then I am less stressed about trying to get my day done and ride before the sun sets.”

Good communication is also essential. According to Ashley, “As long as you are good at communicating, everyone is on your side to try and help you get what you need done with your horse each day. I also have to mention that I have the most incredible husband in the world who allows me to spend most of my free time with my horse instead of him! He is extremely supportive of my career and of my riding and competing.”

When asked what advice she has for aspiring young veterinarians Ashley said, “Study hard, work hard, and learn as much as you can. Engross yourself in everything equine and make it a part of your life. Equine veterinary medicine is a lifestyle choice, not a career choice. I always recommend to students interested in pursuing a career in equine veterinary medicine to spend as much time as possible with an equine veterinarian to understand the ins-and-outs of the profession. It is a large investment to make that surely is not for everyone.” 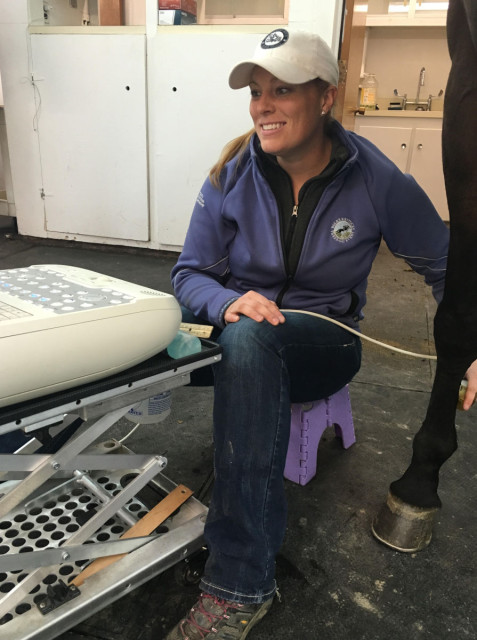 And as for balancing career goals with riding goals, Ashley said: “Having a successful career and still being able to reach your riding goals is doable! Don’t get discouraged and don’t let anyone tell you that you cannot achieve it.”

“Sometimes you have to make sacrifices in other parts of your life to get it done, but having priorities and being efficient at time management will help. Sometimes I have to skip dinner with friends to do trot sets in the dark or miss a camping trip to get to a horse show, but at the end of the day the feeling of accomplishing my goals is what fuels me to do it all over again the next day.”