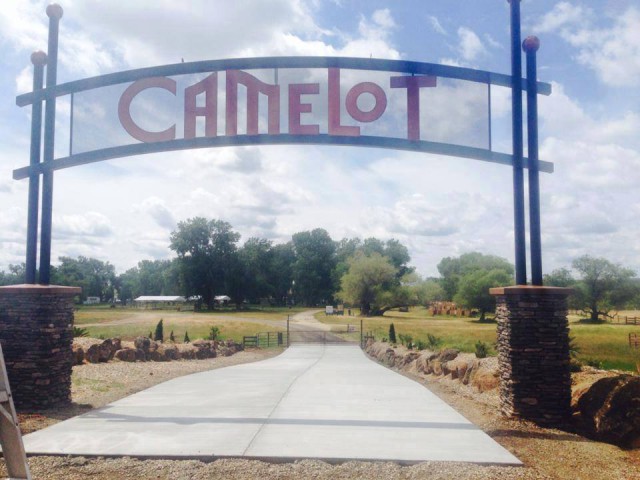 Welcome to the wonderful world of Camelot Equestrian Park in Butte Valley, California. Photo by CEPF.

As most equestrians are aware, the loss of land is a serious problem when looking at the future of our sport. This is why this weekend in Butte Valley, California, is so exciting — not only for Area VI, but for the future of eventing. As the largest dedicated equestrian facility in the state with more than 1,600 acres, Camelot Equestrian Park is just getting its feet wet this weekend.

For years, Camelot Equestrian Park has held unrated events, perfect for young horses and riders to go out and get some experience. In fact, Camelot is where I took my OTTB to see if he enjoyed this eventing thing for his first outing. (Note: He loved it, especially the water complex). They have a three event series, open to riders Intro to Training, where the grand prize is a brand new saddle. 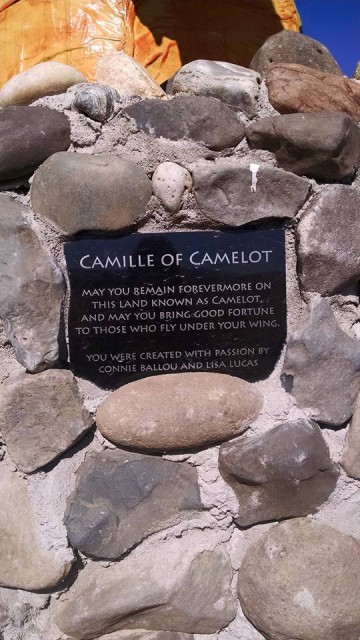 Plaque on the Dragon Camille, a stone dragon that glows in the dark at night! Photo by Louis Blankenship.

Having a recognized event has been in the plans for a long time. However, Area VI’s busy schedule and all the demands of creating a new event take time. When event organizer Louis Blankenship and Camelot’s owners, the Ballous, and the schooling series organizers, Terry Hilst, got together, they worked endlessly for a year and a half to get the event on the calendar and off the ground. “I’ve been incredibly lucky,” Louis said. “The entire area has really stepped in and helped out.”

Landing on Fourth of July weekend wasn’t their initial choice for a dream date of opening, but the team rolled with it, deciding to make this year a solid prep for Rebecca Farm for the Training and Preliminary levels. In addition, the competitors party will be on Friday night so that everyone can enjoy the award-winning fireworks on Saturday night at Lake Oroville.

There will be an FEI-style vet box with water and ice for the horses due to the predicted heat this time of the year. “The safety and comfort of the horses is paramount,” Louis said, and the Friday night party is going to be one for the books! 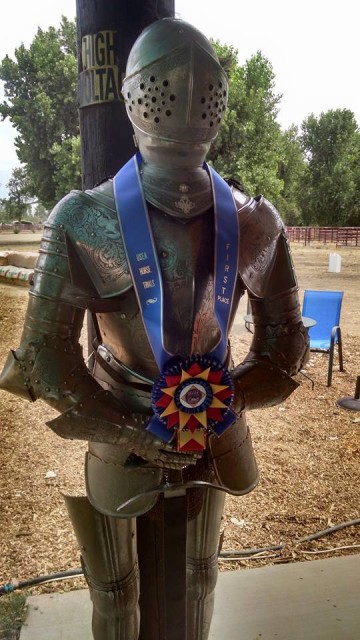 Meet the bouncer at the bar at Camelot! He also guards the coveted first place neck ribbon … Photo by Louis Blankenship.

Louis is familiar to many West Coast events, announcing, evening terrain, and driving water trucks not just in Area VI, but in Colorado — and just last weekend at Inavale in Oregon. He has had almost every job you can have in eventing and credits that experience to being able to try his hand as an event organizer. “I’ve seen what works, what hasn’t worked, what the riders like, and more,” Louis said. “This is really a dream for us, and it’s just the beginning.”

Not only that, but Camelot is giving away great prizes — including $1,000 per division all the way through intro. Other prizes include a full Revita-Vet system and a Devoucoux saddle, gift certificates to Ride On Video and APF products. There will also be Thoroughbred Incentive Program awards and LEGIS Optimum Time awards. Ribbons go to 10th place. More familiar faces will be seen over the weekend, from dressage judges, TDs and announcer. The West Coast has come out to support this event. 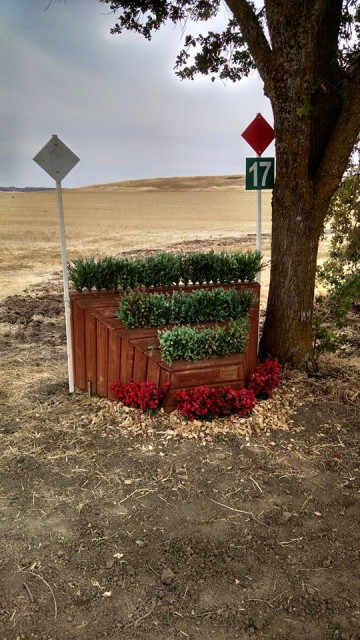 This corner was designed, built and donated by Logan Bearden as this Area VI young rider’s senior project. Photo by Louis Blankenship.

Despite all the stress of getting an event off the ground, Louis remarked, “I can’t say enough good stuff about it.” He started to list all the people he wanted to thank — but then quickly realized he would probably forget someone by accident. “Everyone has helped this happen,” he said. “The board of Area VI, Megan at USEF, Shelia in the main office, the board of Camelot Equestrian Park Foundation, everyone who has invited me to help with their event over the years — this is truly a community success.”

But not all will be over on Sunday! Louis and his crew are going to water and drag after the last horse, leave the flags up and leave the course open for schooling on Monday.

The cross country course is designed by James Atkinson, who got to work with entirely different terrain. There is a 200-foot hill at the start of the Training and Preliminary courses, which have a 500-foot elevation hill change, something very atypical for Area VI. The stadium courses are by Jose Nava of Mexico, and Tremaine Cooper came out to do the inspections. 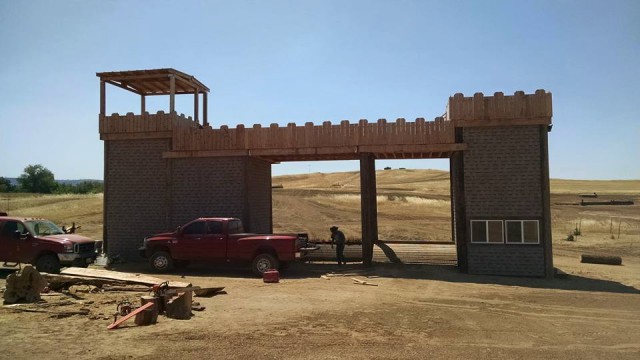 When Camelot decides to build a tower, they build a tower! Spectators can stand in, around and on the tower — go brave eventers! Photo by Kristi Fetzer.

Most of the XC obstacles were built by Louis himself with the help of Danny Serafini. Going with the theme of Camelot, there is a tower (which spectators can climb and watch the event from!), battle-axes, swords and even a beer cooler that will be filled during the event. Stadium jumps show off dragons and unicorns thanks to Donald Trotter of Sunsprite Warmbloods, who will also be a friendly familiar face in the warm up rings.

The USEA recognized event only goes to Prelim this year, including Intro, FEH and YEH divisions. Plans to expand to include a Novice Three-Day as well as a Training Three-Day, plus an Intermediate course, are already underway for next year, along with adding more events to the calendar.

The Park has a five-year plan, with an FEI event hopefully by then, and a 10- and 15-year plan, so expect to hear more from this wonderful facility in the future. Planning for CCI level courses is already underway.

It is clear this is just the start for an amazing facility that is well on its way to becoming a destination event for the West Coast. Chinch has a ticket to the party Friday night — he’s always up for a good party — and is planning to scout out the event.