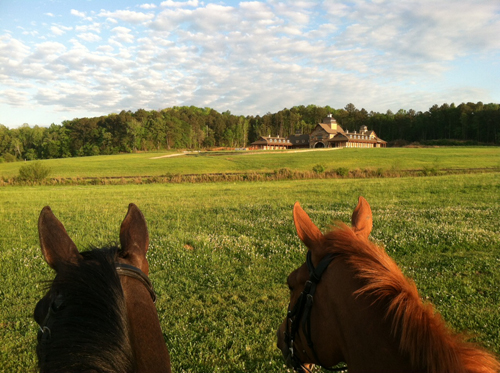 The calm before the ... party?

Get your party pants on, people! Chatt Hills’ host site, Bouckaert Farm, is bringing the heat this weekend with a competitor’s party to end all competitor’s parties. As you may know, the property has been used for one of the biggest electronic music festivals in the country, TomorrowWorld, for the past few years, so what better setting to throw the best competitor party of the year?

Chatt Hills will be hosting a Fourth of July laser show and dance party tomorrow in commemoration of Independence Day. All competitors will receive free access, and admission for all others is just $10. For the younger members of the crowd, the show will be family friendly, with the party continuing on later into the evening.

One sponsor of the party is Cavalor in celebration of their first full year manufacturing in the U.S. “We are really pleased to join Chattahoochee Hills Eventing in giving back to the sport,” a Cavalor representative said. “Early July marks the first full year manufacturing our product in North America, and it seems fitting to celebrate that milestone on the Fourth of July and in Georgia. We are very serious about our mission at Cavalor, but we also believe in enjoying the moments of small victories. We look forward to celebrating with you.”

Organizers have been working hard to pull of the party of the year, including course designer Hugh Lochore. “Bouckaert Farm is synonymous with high level equestrianism and the largest music production in America,” he said. “Our July Horse Trials have blended the two for a July 4th spectacular unlike any other in the most magical setting imaginable.”

Michael Pollard has also been heavily involved with planning the party — something that will make anyone who has attended any of his other parties excited — and we know that all of the stops will be pulled out this weekend.

“I am really excited to have the event put on an exciting evening for competitors,” Michael said. “It reminds me of the old North Georgia days! I hope plenty of people will come so I’m not dancing alone … because that’s embarrassing, but likely to happen.”

Chattahoochee Hills Eventing is hosting a killer Fourth of July Laser show and Dance party on Saturday night. Competitors free entrance, but open to all for $10. Going to be something like below after 9, but there will be a children appropriate show from 8-930:)

Don’t let Michael dance alone! Be sure to stop by the competitor’s party tomorrow evening, and don’t forget to send us pictures! Speaking of pictures, the event is also running a promo in partnership with Cavalor. Post your party pictures on Instagram tomorrow using the hashtag #CavalorCooled to be entered in a drawing to win a year’s supply of Cavalor Cooling Wash and Cavalor Muscooler.