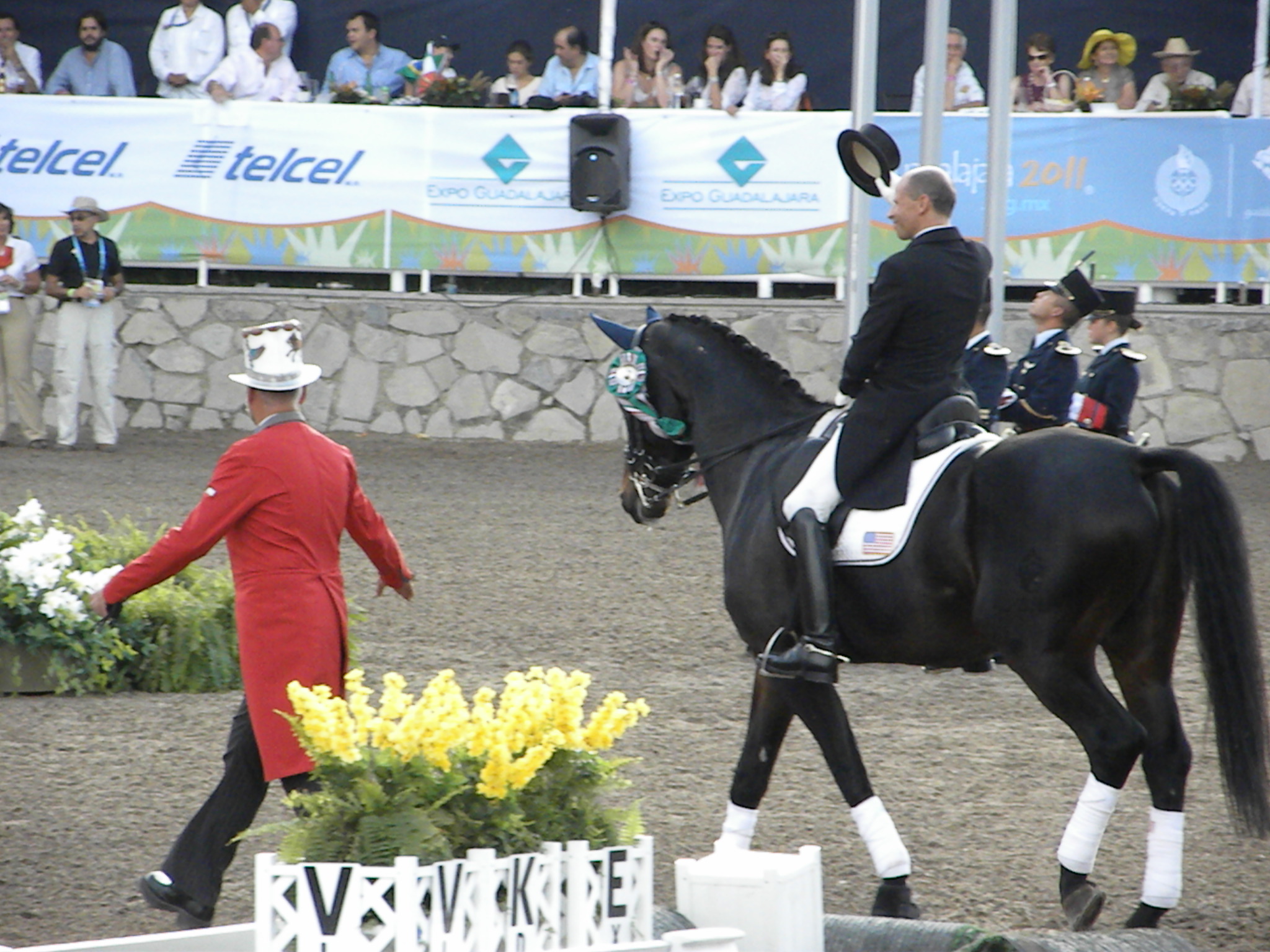 Steffen Peters saluting the crowd after his victory

The red, white, and blue dominated the dressage competition at the Pan American Games from start to finish.  After winning the team competition by a huge margin, the US riders took the top three spots into the final round of the individual competition today and finished with a podium sweep.  Heather Blitz did everything she could to put the pressure on her team mate Steffen Peters, but Steffen and Weltino’s Magic rose to the occasion and held on for the gold.  Marisa Festerling and Big Tyme finished in third for the USA.  Heather’s test with Paragon was something to remember, including a walk in and a walk off from the first salute, big beautiful movements, and a lovely patience through the test by Heather.

Canada had two strong rides in the freestyle this afternoon, ultimately taking 4th and 5th.  Thomas Dvorak and Viva’s Salieri performed a consistent test that lacked the big movement required to break through into the medals.  Tina Irwin of Canada performed a lovely test with Winston that started with the Chariots of Fire theme song.  Anything that involved Chariots of Fire is awesome, particularly freestyles.  A lot of the horses in the freestyle looked a bit overflexed, but Tina did a great job of keeping Winston in front of her hand and he was even a bit above the bit at times.  They jumped from 10th after the first round to finish in 5th.  My judge’s remarks would read “beautiful horse!”

I have to give dressage as a sport a lot of credit for making what is essentially a pretty boring event as spectator friendly as possible.  Making music part of the freestyle tests is brilliant and really gets the crowds involved.  During the breaks they blasted pop music, which, although at times terrible, also kept the crowd happy and moving to the music.  There’s a reason it’s called “pop music.”  Any entertainment expert will tell you that if you can give people something moving to look at and blast music they enjoy you’ve won half the battle.  Just ask MTV.

The next two equestrian disciplines are going to post a much bigger test for Team USA.  The eventing jog starts in the morning.  Let’s keep our fingers crossed for cowboy hats for the US and flannel shirts for the Canadians.  Go eventing.