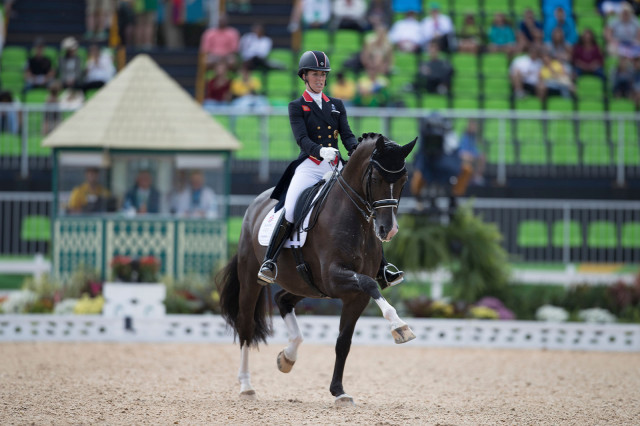 You might think that you’ve sailed under the radar, but we know you’re out there. Who are you? A rare breed, perhaps — but you eventing folk who secretly love dressage aren’t as inconspicuous as you might think. We spot you by the flash of patent leather — just a touch — that sneaks its way onto the Spanish tops of your boots. We spot you by the hint of sparkle on your horse’s browband, a coquettish diamanté that flirts with us across the warm-up and makes us feel so, well, navy. And we spot you by the fact that your horse actually does the leg-crossing thing when you leg-yield, while our own recalcitrant nags are simply offering to perform the movement standing up, instead.

Yes, you’re out there, and we’re onto you. And so is the crack team at Badminton Horse Trials, who have made some exciting changes to this year’s schedule that will draw you all out of hiding.

British dressage star Anna Ross has been announced as a new addition to the Thursday and Friday commentary team, taking over from the much-loved queen of snark Pammy Hutton on Badminton Radio’s exceptional coverage. While Pammy’s departure from the Badminton line-up is a sad one indeed, those still reeling from the news will take great comfort in knowing that Anna is a very worthy replacement. Sharp as a tack, super knowledgeable, heavily connected with eventing, and witty to boot, she’ll offer up a huge amount of insight and a fair few laughs throughout her stint behind the microphone with Peter Storr.

But that’s certainly not all that’s being dished out to the dressage fans among us. Visitors to the event will be in for a treat with an all-star lineup on Thursday and Friday, including a rare chance to see one of the sport’s best-loved stars. 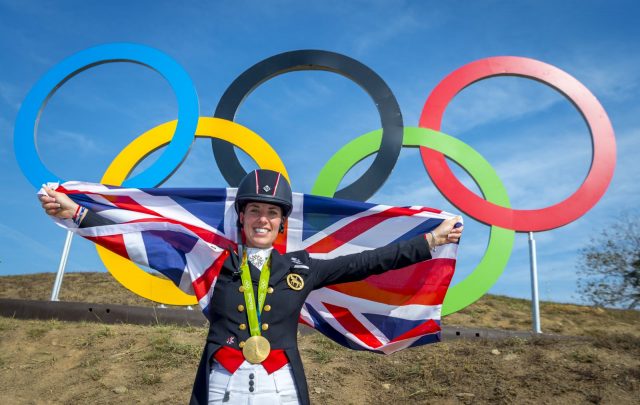 Thursday’s lunch break, from 12.30 p.m., will feature the ‘Parade of Champions,’ in aid of Badminton’s chosen charity for 2020, the British Equestrian Federation Fund (BEFF). The BEFF has been set up to help Britain’s human and equine athletes get to Tokyo this summer for the Olympic Games, and what better way to drum up support for successes to come than by celebrating those superstars who’ve brought us so many successes in the past? The Parade of Champions will feature a surprise line-up of previous Olympic heroes across the disciplines, who will be led in-hand around the main arena. The Pied Piper of this parade? None other than Valegro, perhaps the best-loved dressage horse of all time, who arguably set the standard for modern dressage with Charlotte Dujardin.

After the Parade, stay tuned for a jam-packed masterclass with Laura Bechtolsheimer-Tomlinson MBE, who was part of the gold medal-winning British dressage team at the London Olympics. After the retirement of the great Mistral Hojris, Laura took some time out of the spotlight to produce her Olympic stars of the future. Now, you’ll get to see these exciting horses — each working at the Grand Prix level and aiming for a spot on the plane to Japan — as Laura puts them through their paces and explains her methodology with each horse. Definitely one to take notes on.

If you’re only at Badminton on Friday, don’t worry — Laura will be back in the ring from 12.30 p.m., this time demonstrating the art and science of a musical freestyle. Watch her piece together the movements as she explains how she chooses her choreography to best suit her horse and eke out the maximum marks from the complex score sheet. No word yet as to whether she’ll do her demonstration to ‘Pony’ by Ginuwine, though.

It’s none too shabby a line-up — and as the saying goes, if you can’t beat ’em, join ’em, right? We can’t promise to embrace the diamantés, though.