During the finale of the virtual USEA Annual Meeting and Convention, viewers were treated to candid interviews with featured speakers Liz Halliday-Sharp and Piggy March. Hosted by Nicole Brown, the interviews yielded some insights into the lives and careers of each rider as well as some perspective that we can all use as inspiration this winter.

You can rewatch the Annual Meeting and see all of the presentations given by clicking here. 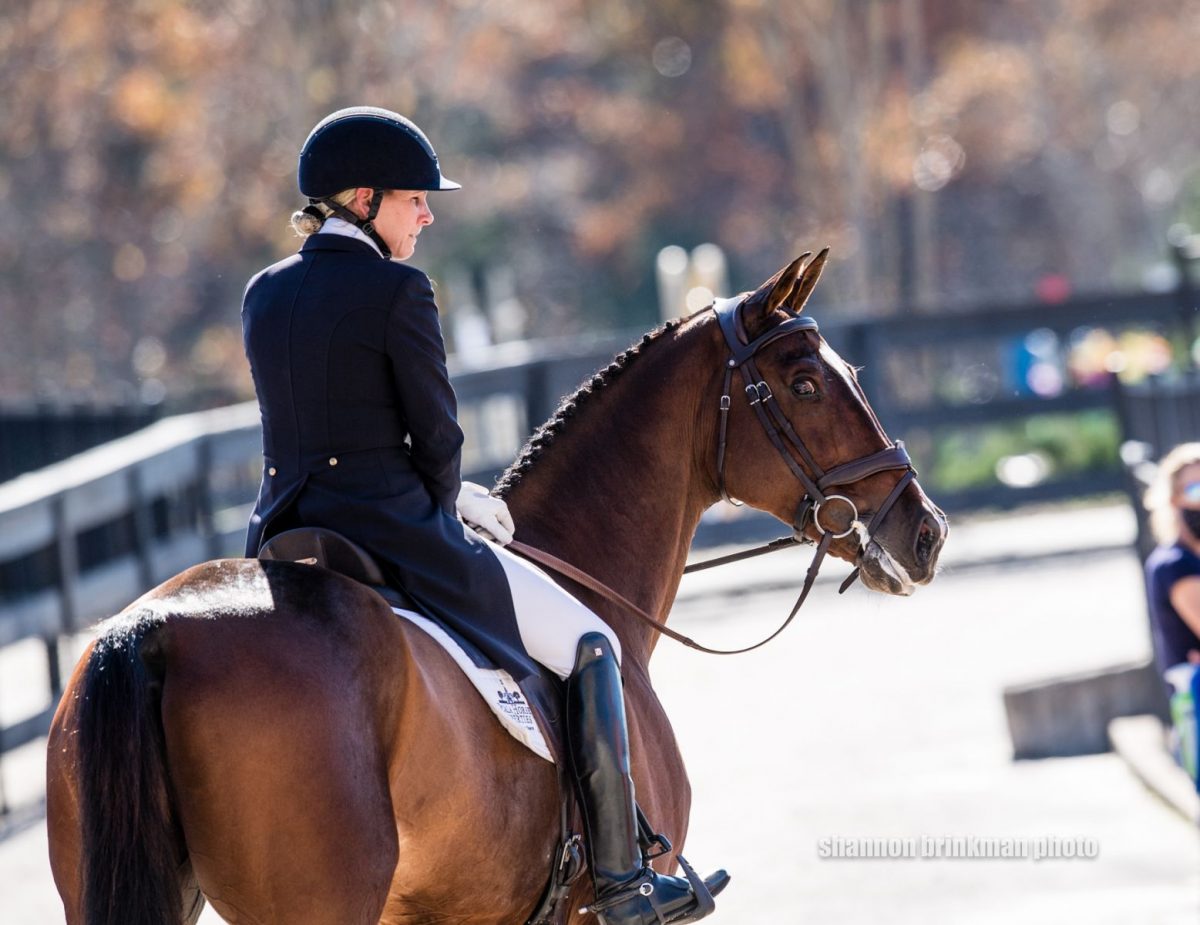 ‘If You Really Want It, Turn Up and Fight for It’

Liz Halliday-Sharp said winning the World Equestrian Brands USEA Rider of the Year award was the cherry on top of her first full season in the U.S. in 20 years. “We’re really lucky to have a lot of great horses, a lot of horses that I’ve mostly produced from young horses,” she said in her interview with Nicole Brown. “You sort of don’t know how it’s going to go. I have a wonderful set of grooms and a great group of sponsors and of course my owners and my family who have always had my back.”

Earlier this year, life as we knew it devolved quickly. The front end of the eventing season had already seen the fallout from the coronavirus pandemic as the Kentucky Three-Day and Jersey Fresh, top of mind as selection trials for Tokyo-hopeful riders, fell victim to cancelation. Yet the riders with a strong shot at the team had wavered – did they continue to keep their horses fit to run a selection trial – or even an Olympics? Or did they take the foot off the gas and play the waiting game?

And so it almost came as a relief when word finally arrived that the 2020 Olympic Games in Tokyo were to be postponed to 2021. It didn’t prevent the disappointment of the postponement from sinking in, however. Every minute had been planned so as to prime the horses for a peak in Japan – and now, who knew what another 12 months would bring?

“I feel like I started 2020 with a really big plan in place and I had everything in mind,” Liz said. “And suddenly in March it was like, ‘ok, it’s lockdown. All the horses are going in the field for holiday’.”

Looking back now, though, Liz says she doesn’t see the shutdown and the extra year of Olympic prep as a bad thing. In fact, with a bit of refocusing the clear silver lining emerged: more time meant more polish.

Liz got to work making different plans. Where could her horses use improvement? Where could she do better? “[The extra time] just gave them more time to get better, she said. “That’s sort of how we looked at it.”

Taking a moment to look back on her career – which includes time spent on the international sportscar and GT endurance auto racing circuits – Liz says she embraces the mental challenge of sport but also recognizes that there is always space to improve. This concept of mental fortitude, she says, is one area she plans to really hone in on over the winter. She says she is all-in with eventing, the sport she has called home since hanging up her racing gloves in 2013 (never say never on getting into another racing car, she indicated at the same time).

She also extended gratitude to USEF Eventing High Performance Director Erik Duvander, who she says has believed in her since day one. “He continues to push me to be better and he’s always challenging me to be better,” she said. “I have an endless amount of respect for him and I think he’s been very, very good for this country.”

This year, she says, has been full of lessons learned – mostly to the tune of “how to pivot from one plan to another, to another.” But it’s something she can apply to all aspects of her work. Get off one horse, wipe the slate clean, get on the next and treat it as the individual it is. Make a mistake, find the lesson and forget the rest. Change one plan, make a new and improved one to replace it. “I think it’s just how you can keep pulling yourself together and take what you can learn with you and throw the rest away,” Liz said.

Asked for her advice for others seeking to “make it” in the sport, Liz thought for a moment before recalling the years she spent in England as a younger rider, riding any horse she could get on and sacrificing sleep for saddle time without hesitation. “If you really want it, just turn up and fight for it,” she advised. 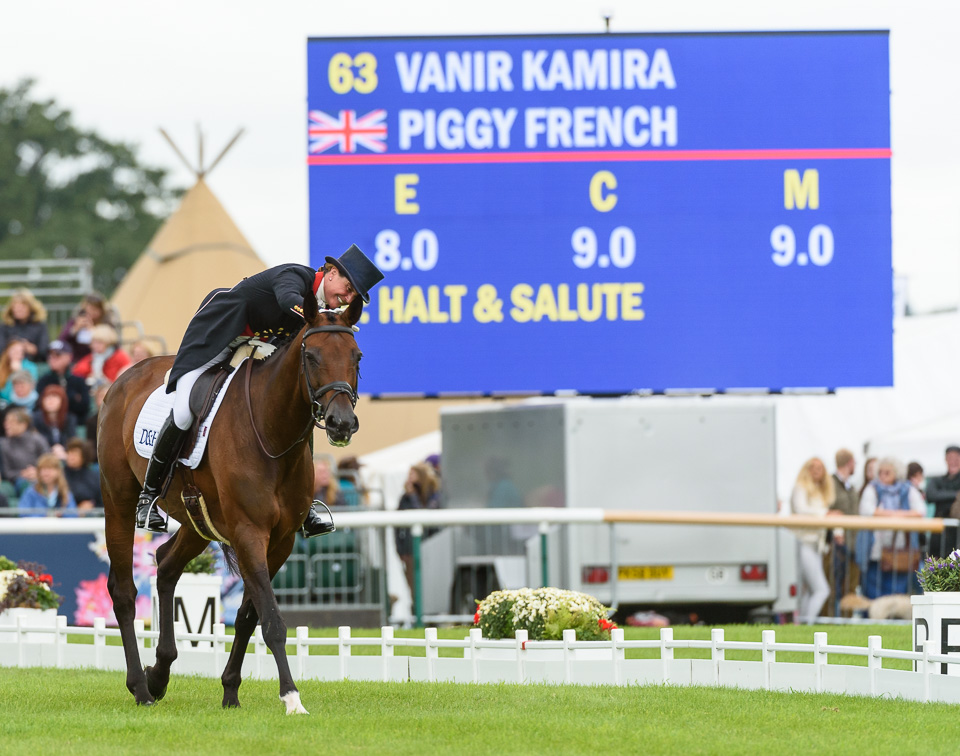 ‘How Do You Dare to Dream Again?’

If Piggy March was going to miss the 2012 Olympics in her home city of London, it wouldn’t be for lack of intensity, desire, talent or try. Piggy candidly reflected on the devastation she experienced when her two Olympic hopeful horses went lame just before selection. She would experience another crushing blow when her European Championship horse the following year was also sidelined.

“It was really tough, I’m not going to lie,” she said. “I did really struggle. To be honest, we can all miss events through an injury, but for it to be your hometown, your London Olympics, your own home Olympics … a once in a lifetime massive thing, and to have two horses go lame so close before when you’re living your life for those horses and trying to do everything you possibly can. It wasn’t like you could sit there and say ‘oh, I was a bit casual here or could have done that’. I found it really hard, mentally, to deal with it, to understand it.”

Indeed, she found it difficult to allow herself a new dream. Here she was, having left everything on the table with nothing to show. “How do you dare to dream again when you think you’re doing everything you possibly can?”

Piggy’s love for her horses and for the sport of eventing is palpable, even through the video.

It’s this lifestyle that has kept Piggy going, even on her worst days. Since those low moments, she’s gone on to accrue countless international achievements, including winning her first five-star – Badminton – in 2019. Even so, she’s the humblest rider you might meet.

“I live in my own little world and I do my own thing, so it’s crazy when you get people that say, ‘I really look up to you’, ” she said. She tells stories of writing to Mary King as a young girl, and how even today she still feels as starstruck with her fellow riders as we do with her.

And for Piggy, the winnings, the titles, the accolades – those are all icing on the cake. She describes her desire to compete, alluding to what matters the most to her: her relationship with her horses. “I love working with horses, and I take that feeling that I get at home and I want to take it to competitions … and if it’s good enough, it’s the best feeling in the world.”