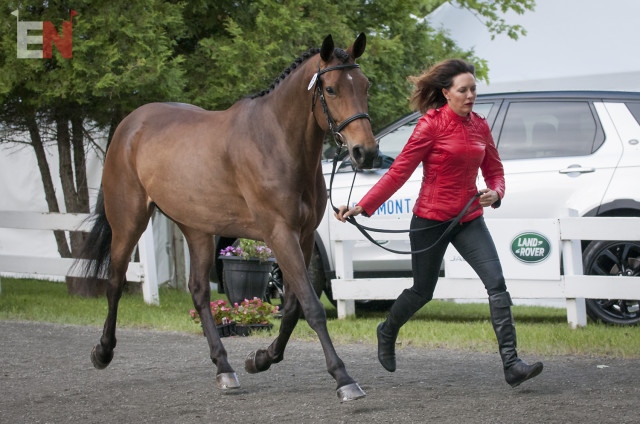 The Final Horse Inspection today at Bromont CCI in Quebec, Canada was a dramatic one, with a total of nine horses sent to the hold box across the four divisions. While rain clouds rolled in over the Bromont Olympic Equestrian Park, 82 horses were presented to the ground jury, but only 80 will move on to show jumping.

Jennie Brannigan and Catalina, fifth after cross country, withdrew from the CCI3* Todd Sandler Challenge before the final jog, as did Sarah Cousins and Knight Lion. Rachel McDonough’s Irish Rhythm, placed fourth overnight, was held but passed on reinspection.

It was a particularly tense moment when Ryan Wood and Frankie, the overnight leaders in the CIC3* Stuart R. Horne Canadian Eventing Championship, were sent to the hold box, but they too passed on their second attempt.

In the CCI2* jog, we were once again holding our breath when Bryn Byer’s Rikki Tikki Tavi and Boyd Martin and Tsetserleg — the leaders after cross country — were held, but both pairs passed upon reinspection.

The CCI*, which is the largest division in the competition, saw five horses sent to the hold box. Ruairi Smith and Victoria Morgan withdrew Fionn McCuhal and Bentley from the hold box. Sophia Middlebrook’s South Park, Brandon McMechan’s Oscar’s Wild and Colleen Loach’s Liberty all passed when represented.

Show jumping is now underway. We begin with the CCI* followed by the CCI2*, CIC3* and finally the CCI3*.