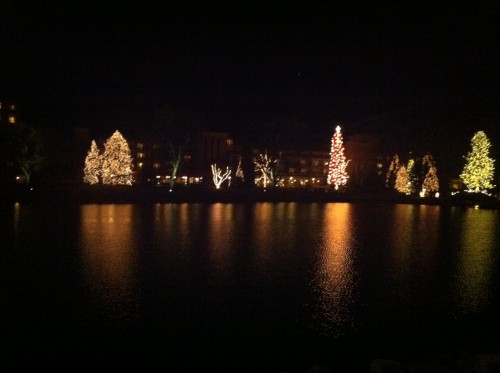 Evening at the Broadmoor

I am a big believer that leaders speak first and foremost with their time.  David O’Connor has led or been the major part of every single high performance meeting today.  The message is clear: succeed or fail, he is going to be a part of every element of this program from start to finish.  I promised you one thing when David was appointed US eventing coach–that David would devote his life to the job and you can already see the result of that with the breadth and depth of David’s involvement even at this early hour.  Notes from two meetings are below.

Under 25 List – This is for riders with CCI2* qualifying results or better.  It will likely mirror the developing riders

National Talent List – This list is for riders with the ability to win in this country, people who are really competitive here

David then stood up and led the rest of the meeting.  He asked the riders questions about what they wanted from him as a coach, with a special focus on the training sessions, and he looked at the high performance schedule for next year.

David asked whether high performance training lists should be by rider or by combination.  David said he is leaning toward making lists based on riders and then enabling the riders to show up with maybe their second or third tier horse if their top horse is lame, for example.  David asked the high performance riders in attendance to consider this issue and give feedback to the members of the Eligible Athletes Committee.

Then David went through potential dates for the spring 2013 training sessions.  It looks like the under 25 and under 18 training sessions will be in Ocala at the end of January.  David mentioned that he wants these first sessions for the younger groups to be almost a week long and more like a very comprehensive clinic.

David said that he thinks most training sessions should be Monday, Tuesday and Wednesday to accommodate riders’ show schedules.  The training session scheduling was very much focused on when events are, so as not to interrupt the riders’ schedule.  You can already sense a rider-focused theme to the new US program, a theme that permeated the eligible athletes meeting.

David repeatedly expressed his willingness to travel wherever he is needed.  He said the last two weeks before Rolex will be about the Rolex horses and he is willing to go wherever necessary to help those pairs out, including home farms.

David was asked if he would be available at local competitions to coach.  David said he absolutely will be available to coach at shows, but riders will have to come ask him because he will be placing a priority on watching at the competitions and then working on improvements at the training sessions.  He said “as a coach, I’m very, very respectful of people in warmup.”  He said he is only at warmup to add, never to detract, and he prefers to just support with a few small comments.  He will only intervene dramatically with a warmup if a rider is in real trouble.

David said that we will definitely send riders to Saumur in late May.  David mentioned plans to do a trip with horses to Luhmuhlen in June, staying in Luhmuhlen for two weeks, and then heading to Aachen.  David mentioned the value of that trip is being able to experience the German events, being able to see the top levels of all sports at Aachen, and also sending the message to Europe that “We are coming for you.”

David said that he wants selections for team trips such as Saumur and Luhmuhlen to be application driven–initiated from the riders.

He said the big weekend in August is the 2014 WEG test event in France.  David said that we will definitely go to spectate, perhaps to ride.  He is a big believer in going and seeing venues before we have to compete there at international events.

September is about Burghley and the AECs.  October is about Boekelo, and we will send a group over there for the Nation’s Cup team competition.  Pau is at the end of October and David said “This will be a big trip for us for WEG bound riders.”  He wants riders to get used to riding [WEG course desinger] Pierre Michelet courses.  He said Pierre Michelet’s courses are different and you have to get used to them as a rider.

As mentioned above, David said he will propose that the training lists are pair driven, but that training sessions will be open to riders to bring various horses.  He mentioned he plans to go to riders’ individual farms for coaching.    He also said that Ms. Mars’ has been very generous to opening her farms for athletes to come and train with David at home.

David said that he is of the opinion that he wants to train here (in the States) before major team competitions, rather than going to England (for example) for 6-8 weeks.  He said this is going to take time to develop good facilities here in the US.  He wants to let riders continue to compete over here with more horses rather than going overseas to train and losing their competitive edge.   He also mentioned the importance of keeping final training session facility options open as long as possible because the weather can have a big impact on the suitability of venues.

David gave out his personal email address, welcoming communication, and said that is the best way to reach him.  He said that he is bad at answering the phone because he does not believe in interrupting his lessons.

David said that his goal in addressing fans this weekend at Convention will be to get the US eventing fans engaged in the program.  For example, he said that he wants fans to go on vacation with us to Saumur.

Lastly, David asked if the riders wanted the training sessions to have microphones.  He said he likes having the public there to audit, but he wants the discussion to be private with the riders.

The EOTF’s brilliant leader, Dr. Mark Hart started with an overview of the forum, explaining that the first goal of the Task Force when it was started was to grow the ownership base.  The second goal was to enhance the US ownership experience.  The major effort towards increasing the ownership base was the syndication program, which has led to the Experience Eventing program and many successful (around 25) syndications over the past few years.  Dr. Hart then introduced the task force for the next 4 years.

David then stood up and spoke about new ideas he has about how ownership can help our high performance program and vice versa moving forward.  David started by saying that the EOTF is one of the most important parts of the high performance community moving forward.  Owners are a critical part of the family that will make the US a successful eventing force.  David described that he wants to improve the owner experience at international events.  He wants to have a dinner before international competitions on the Tuesday that is just for riders, owners, grooms, and himself.  He also said he plans to give a course walk on Fridays for owners to help them understand what the game plan is on Saturday.

David described the four pillars of the US program moving forward — respect (between riders, between riders and owners, between us and competitive nations), integrity (winning the right way, beating the competition straight up), transparency (keeping the selection process open), and consistency (making a habit out of winning).

David wants to make the selection program transparent and based on clearly stated objective and subjective parameters that are all tied to a point system.  He wants to put parameters (such as dressage scores, XC results, etc) into categories and award points to each category based on objective performance.  Subjective categories include character (positive or negative effect on team event), the will to win (on that day being able to pull it out), rider fitness, technical ability, and appropriate combination for particular competition.  Points will be given to each subjective category and a final total will be given for each pair.

He said that the final number won’t be the definitive answer for selection because, for example, trends matter in the sense that a rider with a lower but rising score might be selected over a rider with a higher falling score.  David identified that the purpose of all of this is to hand these numbers back to the riders (and then to the owners) and tell them exactly how they are being assessed.

David explained that when it comes to syndicates and owners, it is not his job or the USEF’s job to get in the middle of the owner/rider relationship.  David said that one thing he will promise is that the US team is going to be professional.  He wants riders to have the ability to find peace to focus on competitions and will try to make rules for barns to be quiet at big events.

That’s all from the USEA convention for Thursday, or at least that’s all that I’m going to write about.  Thanks a bunch for being part of today on EN and stay tuned for much more on Friday.  Go eventing.