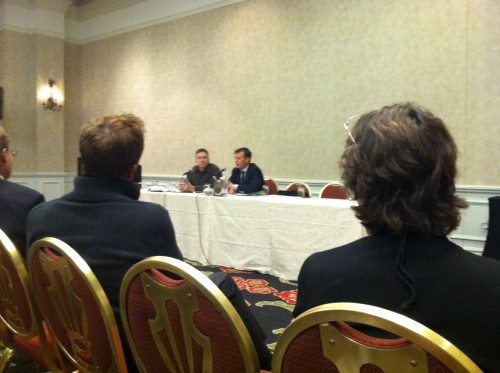 The PHC meeting was a full house, with Jon Holling and Jonathan Elliott in charge

Jon Holling started the meeting by saying that the blessing and the curse of the PHC is that it is all-inclusive. This can make it hard to get things done, so Jon Holling said that they are planning to take nominations for an official working group of 7 members to help make decisions along with Jonathan Elliott. He also mentioned the hopes of becoming an official committee. The PHC formed an informal working group last year, and the nominations signal a formalization of the working group this year.

The first item discussed is the PHC rider rep feedback form for events. The 2012 response rate was just 45%, and one of Jonathan Elliott’s challenges will be getting more participation. Jon Holling stressed that the forms have been a great tool for improvement and that even organizers who are opposed to the form are trying to help make the form better.

Last year the PHC started a footing management program, which is still in its infancy. The PHC has two potential paths to go from here– paying for testing equipment vs funding footing improvement. First, we could take footing measurements from instruments through all the areas and gather data. The alternative is to try to provide equipment such as aerators to improve footing (rather than just to test). The testing equipment would cost $8,000-$12,000 for all areas. According to Jon Holling, providing just one aerator to each area would cost as much as $150,000.

Phillip chimed into the discussion by saying that even the discussion about the program over the past year has led to positive results. Phillip also said that he felt we could get by with a few aerators specifically targeted. Marilyn Payne raised the issue that you can do all the testing you want but if you don’t have a path to improvement the testing is pretty worthless. Phillip also suggested that one route might be to bring a footing expert in to meet with organizers and educate them on what they can do to improve the footing. Jonathan Elliott raised the excellent point that footing is super important but not always the most noticeable improvement, sometimes events decide to pay for new jumps rather than footing improvement.

Course builder Travers Schick stood up and said that measurements of soil impaction and moisture depend on many factors and different events can have many different types of solid–he didn’t feel that testing was worth the cost because there are so many variables. Phillip responded by saying the testing route is more about bringing awareness to each event about the quality of their footing. Marilyn Payne proposed that if on the rider rep or TD evaluation forms the footing is rated really low, the USEA is automatically triggered to contact the event about helping with footing awareness. Phillip said that ultimately footing changes will be caused by riders voting their preferences with their entries. Richland put an emphasis on footing early in their development and now they are packed with entries.

As Jon Holling said, the reality is that this is happening and we just need to figure it out. Robert Kellerhouse came up to the front to address the FEI rules since he sits on the relevant FEI committee. I have to say that each time Robert explains the rules they make a little more sense–a tribute to Robert’s ability to communicate. Once again, I’ll present this just as it was discussed in the meeting, but I have to say it made a lot more sense than in the Technical Committee meeting.

Robert explained that there is a new group of riders under FEI qualification rules called “uncategorized riders.” Most of us are uncategorized riders. He said that the one major change for those of us who fall under the category is that as an uncategorized rider’s qualification rules is that you have to qualify at each level as a pair with each horse. Like the past, you need a CCI at the level below qualifier and a CIC at the level of the CCI you are targeting, but now you need a clear round at either the CIC or the CCI and you can have a stop at the other, rather than being able to have the stop at just the CIC and needing to be clear in the CCI. Robert said that in theory it doesn’t make sense to have the most experienced rider (William Fox-Pitt, for example) qualify the same route as the least experienced rider.

As a result, there is also a new category called “categorized riders.” For categorized riders, you can be a member of a given category based on if you have 20 “international qualifying results” at a given level (CIC or CCI) over the past 8 years. An IQR is a result with the combination of 75 pts or better dressage, a clean XC with less than 90 seconds over time (120 for 4*), and 16 faults or less in SJ. As for whether past results with 20 penalties on XC will count as IQR’s, that all depends on whether they were qualifying results in that year of FEI rules (the rules have changed a few times in the last 8 years). Moving forward they have to be all clear.

If you are a member of any given category then you can buy a horse at that level or lower and you don’t have to go back and requalify at every level with the horse and the horse doesn’t have to be qualified all the way up to that level (uncategorized riders would have to go back up through the ranks with the new horse). For example, assuming that Phillip is a category A rider, he can buy a 4* horse and compete at the 4* level without having to go back and requalify at each level (which an uncategorized rider would have to do). A category B rider would have to go back to the three-star level and get a qualification. An A rider could start a new horse at a higher level more quickly as a result of their higher category status.

Hugh Lachore pointed out that the number one rider in the world, Michael Jung, would currently be a category B rider under the new system–that sounds pretty absurd. Jon Holling also pointed out that one effect is that owners who want to move a horse up through the levels quickly will target A & B category riders because they can move horses up the top levels more quickly. Robert said that the new system isn’t perfect, but it is a step forward in his mind.

Max Corcoran spoke about the Horsemanship Taskforce and mentioned the importance of using lower level three-days to educate the lower levels as well as increasing the number of educational seminars at future USEA conventions and the AECs. As Max moves onto life beyond OCET she will have more time to focus on building these initiatives–good news!!