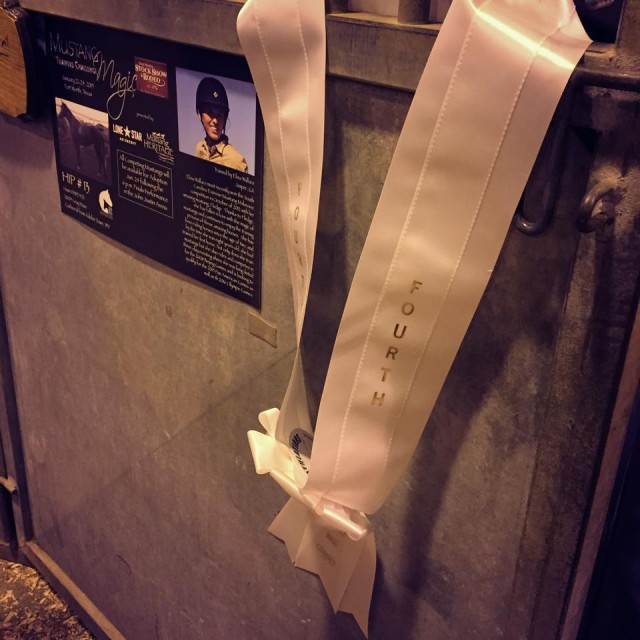 Elisa Wallace is traveling back home after this year’s Mustang Magic competition with a handful of awards, a huge smile, and a little mare whom she was successfully able to adopt at the conclusion of competition.

Going into the final day of competition, Elisa and Hwin were placed seventh overall on a total score of 139.5. For the final round, each finalist was required to complete a freestyle showcasing the horses’ newly learned talents. Although Hwin was a bit keyed up, Elisa shed her tack and showed off the bond the two have created in just a few short months, to the delight of the crowd.

After the freestyle competition, the judges marked Elisa and Hwin down for  a 18/30 and a 17.5/30 for horsemanship, and these scores helped Elisa take home a fourth place ribbon as well as the award for Fan Favorite.

Following the finals was an auction for the mustangs competing, in which Elisa was successfully able to purchase Hwin at the second highest price of the weekend, $2,100. Now we’ll get to see much more from this adorable mare as she continues her career with Elisa.

Many congratulations are in order for Elisa, Hwin, and all of their supporters. The Mustang Magic competition is a special one that showcases a breed that has proven to be hardy, versatile, and talented. For more updates and photos from the weekend, visit Wallace Eventing’s website or Facebook page. Go Mustangs!