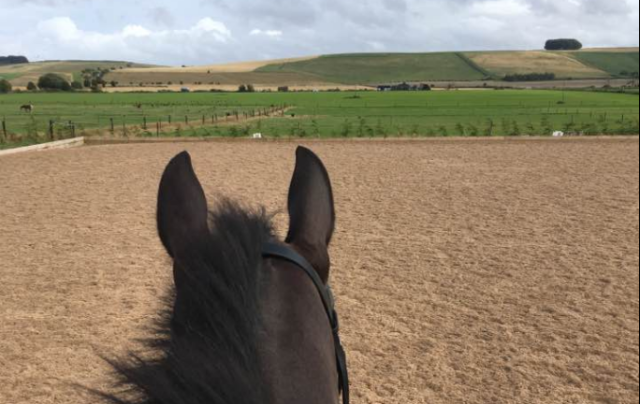 Eventing fan favorites Elisa Wallace and Simply Priceless (A.K.A. “Johnny”) have made it safely to their new temporary digs in England as they prepare to tackle their third four-star together at Big Bad Burghley. Elisa was determined to get her and her Olympic long-list partner to an international event this fall, and successfully raised nearly $10,000 through a GoFundMe campaign to finance their trip.

Elisa has a hilarious and endearing vlog series, and in her last episode, enlightened her viewers on the final preparations for getting a horse overseas for a world class event, from the final prep show to the organizing and packing, to the actual flight plan for Johnny to get to England. (Georgia >> Virginia >> New York’s JFK >> Amsterdam >> England. Wow!)

Johnny and Elisa left for their destination on the same day, but seeing as Elisa is not 1,500 pounds, she arrived much quicker to their British home away from home at American transplant Katherine Coleman’s yard.

With the extra days and Johnny still on his way, Elisa’s gotten to enjoy a few sites, ride some of Katherine’s horses, and attend the Bicton HT where, like any good American eventer, she geeked out a little watching William Fox-Pitt and Jock Paget do their thing. (Celebrity eventers: They’re just like us!)

Johnny arrived at Katherine’s yard today, looking as fit and dragon-like as ever.

We’re just ten days out now from dressage at Burghley, and the riders just got their draw order. Elisa and Johnny were drawn as #23, and will be the first Americans out on Thursday, September 1.

We wish Elisa, Johnny, and all the American competitors the best of luck in their final preparations, and we’ll continue to bring you all the action from across the pond!