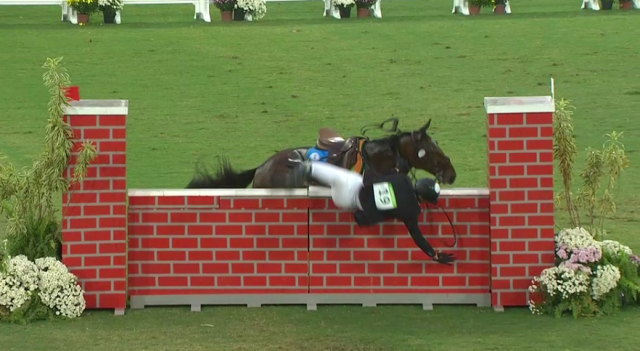 While show jumping was the last of the pure equestrian events to take place in Rio, there are still horse-related activities at the games today in the form of the Modern Pentathlon. While the fencing, swimming, running, and shooting all seem harmless enough, the jumping phase seems to need some refining. 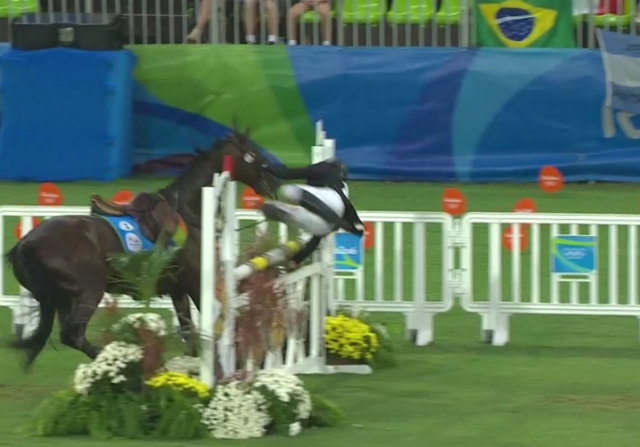 According to pentathalon.org, “Athletes compete on horses provided by the organizers, which are selected from a random draw. For warm-up and preparation purposes, athletes are allowed to ride their allocated horse for 20 minutes and to have up to five trial jumps in the warm-up arena provided.”

Among the more controversial elements of this sport:

The heights and spreads are significant for a mixed sport. For dedicated show jumpers or eventers, 3’9″ isn’t a totally daunting number, but by the very nature of the sport, we aren’t talking about dedicated show jumpers. It’s one of many unrelated sports in which they participate, and my research suggests that most Pentathletes find their way into the sport as swimmers who learn the other sports later on. (That’s not true for all, but seemingly many.) 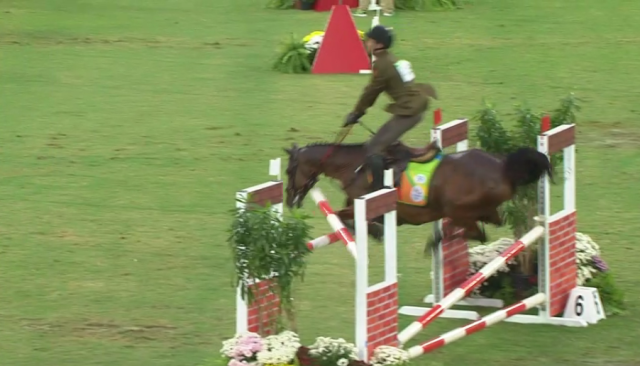 Finding the right distance at this height is much more critical. Screenshot via NBC Olympics.

The clock doesn’t stop when you fall off. If you and the horse part ways, there is no time for tack check or injury protocol. When the riders fall off they literally have to chase their horse to get back on because the clock is running, and there’s a 150 second time limit per horse.

Horse doesn’t like that fence? Just skip it. If your horse refuses a fence, it’s ten points, and if they refuse a second time, it’s an elimination. OR, you can just take a 10 point deduction and skip that fence altogether and move on to the next one.

The NBC commentators lack equestrian knowledge. And I would argue, severely mislead the viewers about what is going on in these rounds. Unlike the great commentating by the horse savvy John Kyle and Melanie Smith Taylor that the other equestrian sports have enjoyed these games, the Pentathlon commentator seemed very confused about why all these horses were so unwilling to jump. I counted at least seven times where the announcer stated, “This horse just doesn’t want to cooperate at all” when the horse had been given an impossible instruction, rushed to the base of a fence, or given no real instruction.

The horses and riders are complete strangers to each other. In the Maclay Finals or back in old days of show jumping, it wasn’t unusual for the judge to ask the best riders to switch horses – one of the great tests of true horsemanship. To expect riders who already don’t appear completely comfortable jumping at all to jump on a strange horse seems like an unusual choice.

Talking strictly numbers, it does seem to be a much higher rate of incidents than the other equestrian sports. Over six rounds of equestrian show jumping at the Rio Games, there were three falls. In one round of pentathlon jumping, there were at least four (as well as one rider who fell twice), and more than a dozen refusals. This doesn’t seem to be an anomaly, as Leslie Wylie reported back in 2012 that a U.S. pentathlete was quoted as saying, “Every single time I’ve been in a pentathlon, something unfortunate has happened.”

The surrounding officials at the event don’t appear to be horse savvy. When riders did fall off, officials would run at the horse, sometimes from behind, and try to restrain them by a stirrup or breastplate, and more than one horse kicked out in this process, lucky not to have injured anyone.

I want to avoid the temptation of saying a sport is silly or unnecessary while other mainstream journalists have been making blanket statements about all the equestrian sports and they’re uselessness. I actually find the philosophy and the idea of the Modern Pentathlon to be quite inspiring and intriguing, and a powerful overall test of skill and athleticism.

It just seems fair that, as eventing has had to soul search concerning its role in safety and welfare of horse and rider, maybe we can all do more to strive for safety in all the equine sports, and put our best foot forward on the global stage.