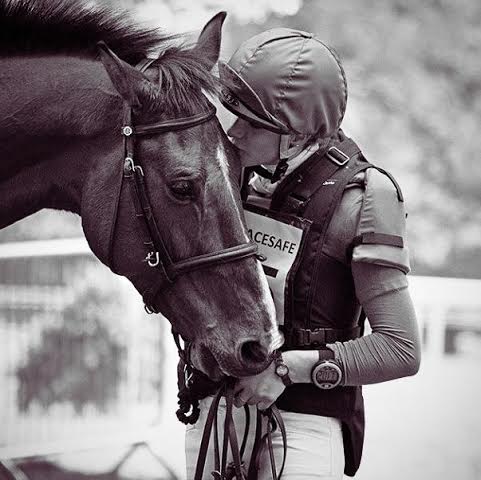 What do you do when your mother is a six-time Olympian, among many other lifetime achievements? You become a rockstar eventer yourself, naturally. Emily King is Mary King’s eighteen year old daughter who has stepped in to fill some very big shoes with some equally big plans for her own future.

Emily caught the horse bug early on. “I used to spend all day on the yard with Mum, helping with odd jobs and persuading her to let me sit on her horses,” Emily said of her early riding years. Emily’s first competition horse was a Connemara named Roy, who she rode up to the British Eventing level Novice before she outgrew him.

Now, Emily has six competition horses in her string and plans to prepare for competition at the CCI3* and CCI4* level now that she has turned eighteen. “I am lucky enough to have a good team of horses for this year; the same six as last year,” Emily said. “My two Advanced horses are Mr Hiho, owned by Patsy Mason and Brookleigh. Then I’ve got Walitze F Vejgard, owned by Gabriella Atkinson, Miss Indigo, also owned by Patsy Mason, Charlemagne, owned by Lord Patrick Beresford and Del Piero, owned by Gillian Jonas. So I’ve got a good team and a varied area of different levels.”

Last fall, Emily ran into some trouble when Brookleigh’s owner decided that she wanted to sell the horse, who had just completed his first season with Emily in the irons. Together, they had won two junior trials and qualified for the 2013 Junior European Championships. In 2013, Emily was also named the National U21 (Under 21) Champion, thanks in large part to her results with Brookleigh. When Emily and Mary found out that Brookleigh was to be sold, they launched a social media campaign in an attempt to find an interested party to take over the ownership and retain Emily as the rider.

A few weeks later, Emily was contacted by an overseas buyer who wished to remain anonymous to the media but who was interested in becoming involved as the owner of a horse for a young rider. “She had heard about Emily through our mutual friend, so when she saw our online campaign it felt like serendipity,” Mary said in an interview with Horse & Country TV. “Emily is just so relieved to have found somebody.”

Emily now plans to move forward with her plans to advance her career with Mr. Hiho and Brookleigh. “My long term goals are to win a gold medal at the Olympics, as well as Badminton and Burghley!” Emily said of her ambitions. Certainly having Mary King as your mother is the best possible inspiration to achieve greatness as an eventer. On the flip side, having Mary King as your mother may also bring mountains of pressure with it. “I feel a little bit of pressure, thinking that people may automatically think that I should be really good because of Mum being who she is,” Emily said of dealing with pressure and public image. “But I don’t feel too much; I try not to feel too much. I try not to think about it too much and just do as well as I can.”

At the end of the day, Emily is thankful to have Mary as her mentor as she adds more experience to her riding resume. “Mum has been a fundamental part of my career. I would not be where I am without her guidance and expertise. I have a huge amount of respect for her and am so grateful.”

Here is some footage of Emily competing Miss Indigo in the 1.15m jumpers this weekend: