We hear all the time about horses at the top of the sport, but what about the next generation of equine talent? EN’s Got Talent introduces the future superstars of the sport, interviewing riders about how they’re tackling training with these youngsters. Have you spotted a spectacular young horse at an event you think should be highlighted in this column? Tip me at [email protected]. 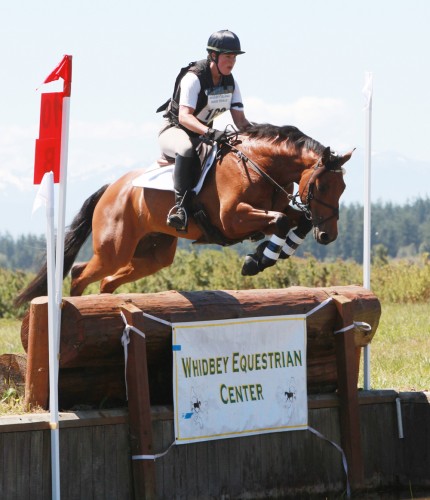 Last week we met Maya Black and Doesn’t Play Fair, a quirky 8-year-old Holsteiner gelding owned by Jon and Dawn Dofelmier, who have shod Maya’s horses for the better part of a decade in the Whidbey Island area of Washington state. While the Dofelmiers originally purchased “Cody” to be Dawn’s novice horse, they quickly realized he had the talent to pursue the upper levels, and Maya has been seeing just how far Cody can go ever since.

They’ve had a fantastic 2013 season, placing fourth or higher in all of their starts this year, including winning their last two Intermediate outings at Whidbey Island and Aspen Farms on scores of 31.2 and 25.2, respectively.

“I take it one event at a time with him,” Maya said. “My hope is to keep moving on and up. He hasn’t ever given me a reason to doubt him, so the goal is to move up to Advanced and keep going. I’ve had a lot of success in the past just listening to the horse and letting them tell me when they’re ready.”

While Maya has never competed Advanced, she’s brought two horses through the two-star level; unfortunately, injuries kept those horses from going Advanced. “Because of that, I’m definitely paranoid about being sure he’s ready,” Maya said. “I’m definitely conservative of how much I run him and how quickly I run him. He could go out and make time if I wanted to, but I’m trying to save him for the longterm.” 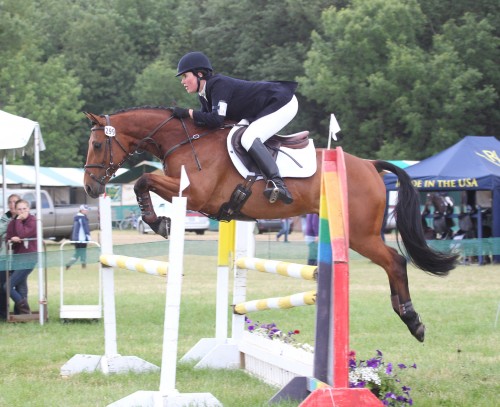 Because Maya knows she’s in this for the long haul with Cody, she’s ultimately embraced many of the spooky quirks she initially hoped to help him conquer in the beginning of their partnership. “He’s never been a horse that is super safe to be around,” Maya said.

“He doesn’t like anything next to him or above his head. He can’t live in a stall because he’ll kick the wall down, so he lives alone outside.” Cody earned his show name because he looks sweet and innocent but “doesn’t play fair” when it comes to how we generally expect horses to behave — like tolerating other horses and living peacefully in a stall.

“With all horses, it’s a little bit of a compromise,” Maya said. “I’ve made a compromise that he has been really good when I take him to shows, and whenever I’ve asked him, he’s always been there for me and put his best effort in. So I can forgive the little quirks. It’s not necessarily worth dwelling on. You have to see the big picture.”

For Maya, the big picture means tackling Cody’s first two-star at Galway Downs in November. If he performs well there, she’ll tentatively consider a move up to Advanced next year, but it’s really up to Cody. “Every time I’ve asked him to do the next level he’s answered every question,” Maya said. “I just take it one day and one level at a time.”

Next Week on EN’s Got Talent: We’ll meet Dom and Jimmie Schramm’s Mellow Johnny, a flashy 7-year-old dun Paint/Thoroughbred gelding I had the pleasure of seeing at the George Morris clinic at Boyd Martin’s Windurra Farm last month.

George liked “Tex” so much that he hopped on the horse during the clinic, and he just happens to be the horse featured in this Beast Mode meme I made of George. Tex is currently competing at Training level and consistently scores in the low 20s for dressage. He’s only competed in eight events in his career and won half of them; as Jimmie said, he’s a pretty special horse.