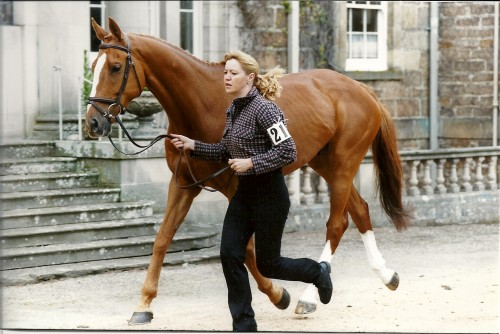 In 1989, a striking chestnut colt with a blaze and two back socks was born, and he was registered with the Jockey Club as “Highway 9 Express”, after a prominent trucking company in Alberta, Canada. The colt’s destiny was to be a racehorse, but after spending a few years at the racetrack in Calgary, and subsequently moving to Edmonton, he didn’t seem to really have much talent there.

However, this was all very good news for Caroline Petty, who had been keeping her eye on him while on a regular snooping trip to the racetrack. After convincing the trainer to give up on him, Caroline brought the bright chestnut home as a three year old in 1992. She approached the trucking company to see if she could get some sponsorship for keeping his strange name, and they declined. Thus, she changed his name to Scotia Gold Rush, and was able to garner some sponsorship from the Scotia Bank, where she worked.

“Mitch,” as he was known around the barn, eagerly took to his second job as an Event horse. “He had the most incredible trot, and even as a youngster when he wasn’t particularly trained at all, he would just float around the field in this wonderful extended trot,” said owner Caroline. Mitch also easily took to the jumping, although he always remained a little loose in front.

“There were a lot of people who questioned whether his loose front end was really all that safe on cross country, but I believed in him one hundred percent, and he was more than scopey enough for any jump.” Caroline worked on Mitch’s dangly front end, but it never got in the way of his performances in the jumping phases.

Caroline originated from England, and in 1998, she decided that she wanted to travel back there with her horse in tow and experience British Eventing. Little did she know that she was way ahead of the curve in that notion! She and Mitch spent all of that year campaigning at the Intermediate level, ending finally with a successful move up to Advanced at Bishop Burton Horse Trials. 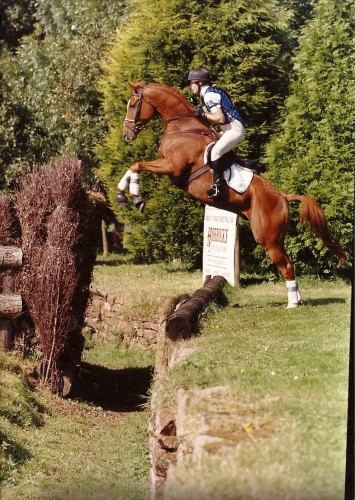 However, at the end of 1998, Caroline had to return home to western Canada, and the thought of bringing her beautiful horse home to the freezing cold landscape without any competitions seemed like a waste of talent to her. So, she called up Gary Carter, father of Kyle Carter. “I told Gary that if Kyle could get an owner, he should really buy this horse from me because he was something special.”

Kyle met Mitch as the horse was traveling back through Canada from England in December. “His eyes just about popped out of his head, and he had an owner, Elaine Davies, who bought the horse for him right there and then,” reported Caroline. “I was devastated to see him go, I loved him very much but I knew that this was better for him.”

Kyle and Mitch got along great, and just a few months after their partnership began, they tackled the Rolex CCI3* in 1999. The pair won the dressage phase, and jumped clean on cross country only to lose the lead by a rail, finishing in second place. On that performance, Kyle and Mitch went to the Pan American Games that fall, and placed second after dressage. Unfortunately, Mitch sustained a serious and rare injury on cross country, and Kyle realized that the horse had really only finished the course because of the size of his heart.

Mitch had the same injury that Kyle’s current horse, Parker, got in 2011 at Blenheim. They both slipped a tendon off a hock, which is the same injury that ended Biko’s career at Burghley and Lucinda Green’s horse Be Fair at the Olympics. Everybody thought that it was simply a career ending injury, and that the horse was as good as retired.

Kyle diligently began creating a new rehabilitation program with the help of his father for Mitch. They spent over a year teaching his hind leg to move on the correct path again, and their efforts were rewarded when Mitch made a full recovery, although the tendon never completely went back to it’s original location. 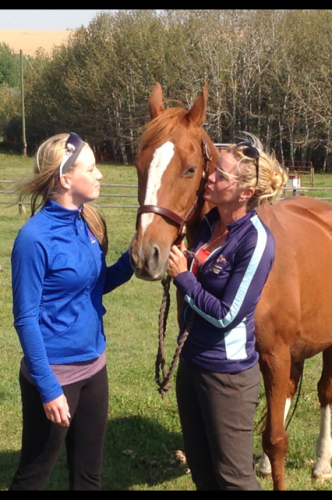 Mitch returned to upper level competition with Kyle, but soon after sustained another minor injury on course, and Elaine Davies decided that he was not cut out to be a top level horse anymore. So, Kyle made sure that Mitch was returned to his first love, Caroline, who was absolutely elated to have him back.

“I gave Mitch to my daughter, Amy, who was 14 at the time and just about finished riding ponies. She had been riding all these terrible little ponies through Training level, and she was quite a good rider, but it was amazing for her to make the step up to Preliminary on Mitch,” said Caroline.

Mitch and Amy campaigned at Preliminary successfully for two years, and then Amy made the decision to retire him sound and happy at the age of 18. Mitch now lives happily in Alberta, Canada with a gang of his old friends in a big field, visited regularly by both Amy and Caroline, who dote on him to this day.