We hear all the time about horses at the top of the sport, but what about the next generation of equine talent? EN’s Got Talent profiles exciting up-and-coming young horses. Have you spotted a future superstar you think should be highlighted in this column? Tip me at [email protected]. 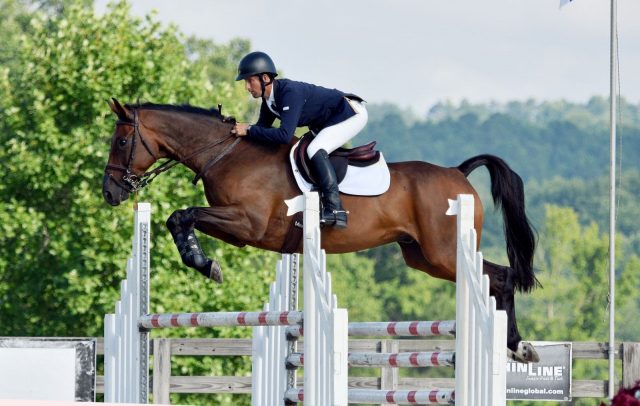 When Andrew McConnon moved to England to work for William Fox-Pitt in early 2016, he planned to stay for two seasons — plenty of time, he figured, to find an exciting eventing prospect to bring home when he returned to the U.S.

But after trips all throughout England, Ireland and continental Europe in search of the right horse, and with his departure date looming ever closer last November, Andrew still hadn’t found the one.

When he received a tip about a 7-year-old gelding at Helen Bell’s yard in North Yorkshire the day before he was meant to fly home to America, Andrew thought “why not?” He made the five-hour drive to meet Bossinova, a Hanoverian (Bonifatius X Dawina, by Der Lord) bred in Scotland by Stuart Adams and Christine Macmillan of Carriden Stud.

Better known as “Hugo,” the horse had competed in pure dressage as a 5- and 6-year-old and completed two BE90 (U.S. Novice level) events with Helen Bell’s daughter, Zoe Dawson, during the 2017 eventing season in the UK.

“There was something about him that I really liked,” Andrew said. “He was a little lazy in the arena, but really good on grass and on cross country. I’m normally pretty hesitant, but on the drive home I decided that if he passed the vetting then I really wanted to work with him and see where it goes.”

Andrew flew home the next day, and Hugo passed a stringent vetting soon after. The horse landed in the U.S. at the beginning of December and was soon en route to Florida with Andrew, who had decided to base his business in Ocala.

“He had a background in the dressage and I felt like that was quite strong, so I didn’t feel the need to have to school him up in that phase,” Andrew said. “I was more focused on getting to know him and getting him fit and used to the ground in the States. I spent a lot of time hacking and doing trot sets.” 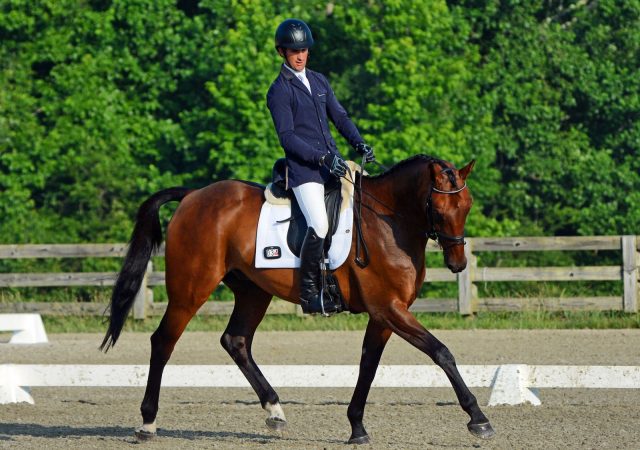 Hugo made his first start in the U.S. in February at Ocala Winter I Horse Trials, where he won his Training level debut on his dressage score of 26.8. He then won his next two starts at Training level as well, both at Rocking Horse, on dressage scores of 26.1 and 23.4, respectively.

“I didn’t know how he would be off of the property, and it turned out he’s just the same if not a little bit better,” Andrew said. “The atmosphere at a competition plays to his strengths. He’s a relaxed horse, so the show helps him to have more cadence and energy in the dressage. He was fantastic in the show jumping, and I was really impressed with him cross country. I had only schooled him a couple times before his first event.”

At the beginning of the 2018 season, Andrew had planned to run four Training level events before moving Hugo up to Preliminary. Following the horse’s three consecutive wins at Training level, Andrew decided to re-evaluate his plan.

“I’m not one who wants to move them up too quickly, so it was a little unique for me,” Andrew said. “I knew Rocking Horse had a good Preliminary in March that would be ideal for a move-up, and he absolutely felt ready for it. He led the dressage by 5 points. I cut a turn in the show jumping and he barely tapped a pole behind, so unfortunately he had a rail. We took it nice and easy cross country, and he went around just as well as he had at Training level.”

Hugo finished sixth in his Preliminary debut at Rocking Horse Spring Horse Trials, taking it all in stride in his typical calm, cool and collected manner. So, as one does with a horse who oozes natural talent, Andrew decided to throw another challenge at Hugo.

“With him stepping up to Preliminary and handling that so easily, I didn’t feel like he needed to go right back out and run another one,” Andrew said. “I decided to take him to HITS to compete in some jumper rounds, and that opened up the opportunity for him to compete in the equitation arena.”

Lauren Lindner of Redfield Farm took the ride on Hugo during the Ocala Winter Celebration at HITS, piloting him to a win in a USEF Hunter Seat Medal class. Hugo took home multiple ribbons in equitation classes throughout the week.

“His flatwork is so good, and he jumps beautifully and has clean changes,” Andrew said. “He could honestly be a proper equitation horse as well, and it was interesting to see what else he’s good at. It was really fun to play owner, but also stressful!”

Following Hugo’s Preliminary debut and successful stint as an equitation horse at HITS, he enjoyed a well-earned break before returning to the eventing scene two months later. Once again Hugo started a winning streak, topping the leaderboard at the Open Preliminary at Paradise Farm in May on 33.0, followed by a win in the Open Preliminary at Chattahoochee Hills in June on 30.0.

Hugo’s summer campaign concluded on an especially high note, as he finished on his dressage score of 29.4 to be crowned the Area III Preliminary Champion at Chattahoochee Hills in July.

“The Preliminary championships course at Chattahoochee Hills had the Intermediate drop into the water and a couple other Intermediate questions, and just like he had done the whole season he answered it all really well,” Andrew said. 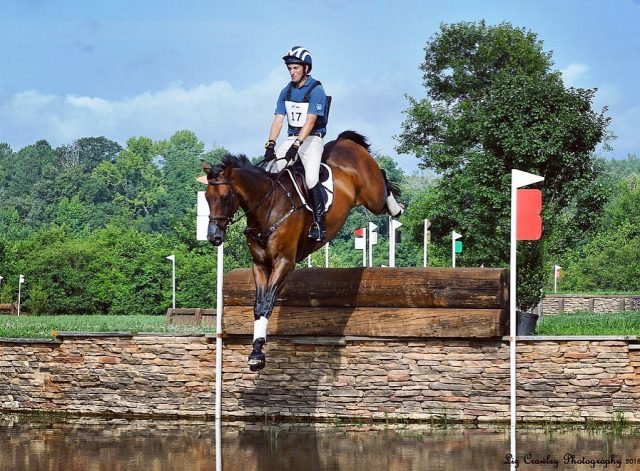 Andrew McConnon and Bossinova over the Intermediate drop into water at Chattahoochee Hills. Photo by Liz Crawley Photography.

After winning six of his seven starts in the U.S. this year, Hugo is gearing up for what Andrew hopes will be an equally successful fall season. Hugo will next return to Chattahoochee Hills, where he has already won two events this year, to contest his first CIC* in September.

Then he will go on to Stable View’s Oktoberfest Horse Trials to contest the inaugural CIC* at the venue before capping his season in the CCI* at Hagyard Midsouth in Kentucky, which serves as the USEF National One-Star Championship.

Looking ahead to the 2019 season, Andrew is aiming to move Hugo up to the Intermediate level early in the year and ultimately aim for the CCI2* at the Ocala International Three-Day Event in April.

“I see it as a long-term journey with this horse, and I really want to produce him the right way and be strategic in how I compete him,” Andrew said. “I would love to get some people on board to come on this journey with me, and perhaps add another young one like him to the string to start creating a pipeline.”

As for what Andrew thinks has made Hugo so successful in his first year of competing in the States: “I think a horse that is trainable is so much more important than flash. With a horse that is consistent each day without pounding or pressing on them too much, you can make so many strides in their training and preserve them in a way that also gets the job done.

“Hugo would be the horse that you walk past in the barn. He’s not an in-your-face type, but that changes when you’re on him. If a horse does the job and checks all the boxes, they can be really special if given the chance.”